Why do children love Michael Myers?

If like me, you spend too much of your time mindlessly scrolling through Twitter, you may have seen videos of kids who improbably love Michael Myers, the iconic indestructible mass murderer from the Halloween series. It’s October, which means these videos are more likely to find their way to your timeline, but it does seem striking that so many pre-teen kids are so into the hulking, homicidal Shape. They dance with Michael Myers, they wear his mask, they hug him, they freak out with joy when he comes to their birthday party. But Michael Myers is terrifying, right? Why would small children imprint so cutely onto someone that is, in the words of leading health professional Doctor Loomis, “simply evil”?


The latest film in the franchise Halloween Kills is in cinemas now, and while we could give you a review, an editorial decision has been made that it is more important to mitigate your confusion if you find yourself sharing a cinema row with a group of tiny Myers stans. What are they doing there, you’ll wonder. Don’t they know this film is rated 18s? Where are the parents? Michael Myers is terrorising Jamie Lee Curtis again on screen right now…so why are they flossing??


It sounds like a bone-chilling prospect. But to mitigate any fears that you might have about being swarmed by a murderous pack of killer-worshippers, your final, blood-choked screams being turned into cute viral content, read this and be put at ease. It’s all very innocent really. Here are the five reasons why kids love Michael Myers.

Children are creatures of impulse and immediacy. Less burdened by context (it’s why they love ‘no context’ accounts so much), expectations and frames of reference because of their youth, they are more likely to go with their gut. But you don’t even need your gut to know that the Halloween theme rules. You just need two ears and/or a heart. The music composed by John Carpenter is very simple and incredibly memorable, which means that young minds can latch onto it quickly the first time they hear it. It’s fast, it’s frenetic, that electronic percussive sound driving the music forward relentlessly, a captivating energy. The first time you hear that synth score, it has you hooked, and if you see aul big Mick thereafter, you’re going to have a positive association with him too. From the merry dance of the Pied Piper, to Vince McMahon’s theme music, to the stirring national anthems of most countries (not Britain) it’s a fact of nature for impressionable minds: It’s hard to remember that someone is Bad if their music is Good. 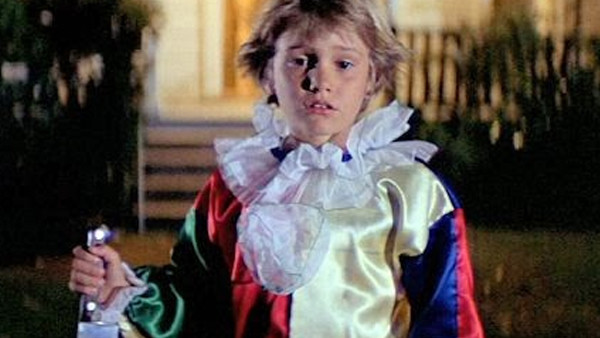 Kid Michael having a Good Time

We don’t know much about Michael Myers. What drives his murderous desires? Where does he get his superhuman strength? Is he still Laurie Strode’s little brother in canon or what’s the story? But we do know this: the lad loves him some Halloween. His many seasonal rampages are his own holiday ritual, and much like kids throwing around bangers or knocking on your door looking for wood every year, yes, they can be inconvenient, but they’re coming from a place of love. Kids have a connection to Halloween that sets it apart from other holidays, it’s the one that is theirs, where the focus is on them, dressing up and getting sweets. It calls to their creative side and puts the focus on them in a way that even the uber-materialism of Christmas can’t match. And Halloween doesn’t have one singular mascot, no ‘Santa Claus’ or ‘Easter Bunny’ for them to funnel and personify that love of the season into. Then they see Michael. The patron saint of Halloween. It’s a wonder kids aren’t leaving out a plate of teenagers and hanging butcher knives above the fireplace for the Shape to find every year.

Just like Kirby. Kids and their developing minds don’t always have the clearest sense of danger. They reach for the top of the stove. They cross the road without looking. And when they look at Michael Myers, they don’t immediately sense impending doom in the way that older people do. The context clues that send a chill down our spines when we notice the Shape lurking just behind the hedges of our neighbourhood don’t mean the same thing when you’re younger. He’s big, but when you’re a kid everyone is big. His famous mask, chalk white and unfound eyes, to us is unknowable and therefore terrifying, but to a child it’s just like that seemingly empty road they’re about to leg it across, safe by subtraction. When you haven’t seen him stab anyone yet, Michael has more of a gentle giant air about him. Really as a cumbersome, distinctive, masked mass, Michael is not that different to the cartoon characters kids will see wandering Disneyland, or Old Trafford’s Fred the Red. Only he’s much more honest about his bloodlust. Not that kids worry about that, which brings me to the next point:

You see, kids are fake Halloween fans. In their pathetic ignorance, they are lulled into a false sense of security in the belief that Michael will not harm them, that his only targets are teenagers, and the adults who protect them.

If these idiot toddlers were True Fans and actually bothered their holes to do some research, they would know that Michael is just as likely to try and murder children when the situation calls for it. That situation being, the Curse of the Cult of Thorn.

In Halloween No. 4, No. 5 and No. The Curse of Michael Myers, Michael hunts down his pre-teen niece Jamie, and in later years Jamie’s baby/maybealsohisownsonletsnotthinkaboutit Steven. Over the course of this trilogy of tripe, it’s revealed that Michael has been compelled by a secret group of Druids to kill his next of kin every Samhain, a festival they are equally fanatically devoted to and unable to pronounce. You see kids, Michael Myers isn’t dancing with you out of some kind of spontaneous joie de vivre, it’s a calculated PR move to look disarming and draw attention away from his sinister cult. Like Tom Cruise jumping on Oprah’s couch.

And sure, kids these days, with their MCUs and their Wikipedias, they’re all about their canon and continuity. They might tell you they haven’t seen the Thorn trilogy because it’s been completely wiped out of existence 3 reboots over, and that Michael is not really driven by the unseen hand of a Druid curse, that he has no motive or modus. But that just brings us to the final reason that kids love Michael Myers.

You can’t interrogate the reasoning of kids too much man. Especially when you’ve got that Dune review to finish. Kids are spontaneous, they have more freedom than us, and the older and more distant we get from them, the more unknowable they become to us. My parents did not know what Pokemon was or how I could possibly like something so irritating, now I am in turn baffled by the Fortnite and the Tikky Toks. It is the circle of life.

And in Michael Myers, perhaps kids can innately sense both a kindred spirit, and a figure, a Shape if you will, of aspiration. Michael does whatever he wants, without needing to provide or even have an explanation, in much the same way as a child who laughs at you and then runs away, or draws all over your wallpaper, or any of the other weird shit that they do. But Michael, free of rules, does even more than any kid can dream of. He wants to stay up late on Halloween, he stays up late. He wants to get out of being grounded, he crashes that van and escapes. He doesn’t like someone, he impales them. And he gets to pursue his hobbies too, without responsibilities tying him down. They see themselves in him. He speaks to their nature. Kids want to Be Like Mike.

From the moment a young, clown-costumed Michael Myers stabbed his sister to death, he’s been frozen in his own time, a kid who doesn’t want the fun of Halloween night to ever end. The youths identify with that lack of impulse control, but is there anything wrong with that? Can’t we let our kids be kids? In his way, Michael Myers has a thing or two to teach us jaded grown ups. We can all take a few lessons from him in following your bliss, practicing self-care and staying true to your inner child.

EDITORIAL NOTE: do not murder it is bad