Stop the presses. We know there aren’t any presses for websites. Stop them anyway.

Michael Flatley, better known in some quarters as the “Irish jig guy”, is turning to Hollywood. The Riverdance star, who retired from his own theme park/gaudy Las Vegas hotel interpretation of Irish dancing in 2015, signed with the Los Angeles-based Creative Agency CAA last year. Since then, the Lord of the Dance has been working on his current project Blackbird, which is funded by, written by, directed by & starring…himself. 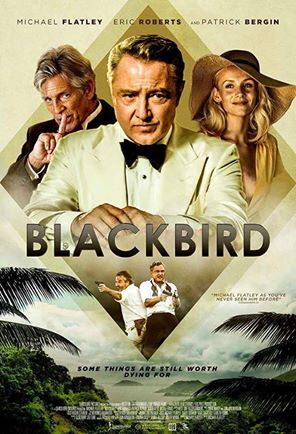 Flateley will be playing Secret Agent Victor Blackley, Codename: Blackbird (!). The troubled agent abruptly retires from service to open a luxury nightclub in the Caribbean to escape the dark shadows of his past. An old flame arrives and reignites love in his life but she brings danger with her. According to Flatley himself, this is a story he has dreamed of telling since he was 7 years old. Presumably after seeing a James Bond movie and/or Casablanca for the first time.

Essentially, it’s like when Michael Scott from the US version of The Office wrote a screenplay called Threat Level: Midnight, about a super cool spy named Michael Scarn, who beats up all the bad guys and romances his secretary, Catherine Zeta-Jones.

The film, was shot across a number of locations including Ireland, England, and Barbados.  includes some well known faces such as Patrick Bergin (Sleeping with the Enemy), Ian Beattie (Game of Thrones), and Eric Roberts (Runaway Train, Inherent Vice, any movie that will have him).

The project is being produced by Richard Bolger of Irish-based production company Five Knight Films, who were behind last year’s Irish box office hit Cardboard Gangsters. Other production companies involved in the film are West One Entertainment, Parachute Films, and (wait for it) Dancelord Pictures.

No release date has been announced at this time, but according to a report from IFTN after shooting for the film wrapped in March, the word is that the film will be released in the Autumn of this year.

You better believe we’ll be showing you a trailer for this as soon as it’s available. If Flatley doesn’t use Irish dancing to beat up a bad guy at some point, like Gymkata by way of the Eurovision Song Contest, we’re going to be very disappointed.

Folks, we cannot wait for this.

Parasite Gets Deep Under Your Skin and Stays There
Uncut Gems Gives Us the Jewel in Adam Sandler’s Crown
Queen & Slim Are On The Run From America’s Troubled Race Relations
Film In Dublin’s Best Films of the 2010s
Knives Out is a fun whodunnit that takes a stab at something deeper
VMDIFF 2019: Treat Me Like Fire
Direct Line with Brian O’Brien
Best of 2018: The Shape of Water
Best of 2018: Mission: Impossible – Fallout