Ross McDonnell is both a photographer and filmmaker, with credits in photography, cinematography and directing on several documentary films. Born in Dublin, Ireland in 1979. As a photographer, his work has been published in The New York Times, Art in America, The Observer, The Washington Post, The Irish Times, Fader magazine and more. A twp-time nominee for Irish Film and Television Awards, his films have screened at festivals around the world, including last year’s Elián, an official selection at the Tribeca Film Festival. A frequent collaborator with Alex Gibney, McDonnell worked on the director’s most recent film, No Stone Unturned – a documentary about a flare up of the violence of the Troubles in Co. Down in 1994, released last November.

What is the first movie you remember seeing?

The Wizard of Oz at the old Ambassador Cinema on O’Connell St. one Christmas. I was 4 or 5 I think.

Which fellow director/photographer/cinematographer has had the biggest impact on your work?

I think watching Kubrick movies when I was getting into cinema early on had a huge impact. His films loom so large on the screen but they are also kind of a gateway drug to more arthouse and independent cinema in many ways. That was so important.

Similarly, discovering the work of photographers Bruce Davidson and Eugene Richards when I became interested in the still image, connected so many things for me. That documentary work could be nuanced, visually rich and expressive, not just the kind of shocking hard news work of Don McCullin or the  far-flung exoticism of National Geographic magazines that I had been exposed to up until that point, was a revelation.

These photographers also taught me that it was possible to be close to people, that people always have pride, regardless of their circumstances. That the camera could be an instrument of inclusion. Great lessons.

I’m always hugely grateful to PJ Dillon as a Cinematographer. Everybody needs mentors and I was lucky enough to work on my first film set where PJ was the DP and also to work with him again on several projects, in a variety of guises. I’ve learned hugely from his advice, openness, professionalism and his generosity as a collaborator on set.

As a fan of other Cinematographers, I love the work of Gabriel Figueroa, Harris Savides, Adam Arkapaw.

What film do you love that not enough people know about?

I love Michael Glawogger’s work, he passed away suddenly last year. A great loss to world cinema. ‘Megacities is a mind-blowing film.

What was the most valuable thing you learned from your studies at DCU/DIT?

I was lucky to have really great teachers at both places I studied, however I think the friendships you make and the relationships you build while a student are the most lasting, valuable thing.

What advice would you give to someone starting out as a director?

How do you compare working on projects in Ireland vs working abroad (e.g. the culture, funding process etc)

I’ve been very fortunate to have worked on all types of projects in lots of different cultures as both a Director and Cinematographer and I think it’s fair to say that right now feels like a very rich time for documentaries.

Firstly it’s a magnificent time to have such broad audiences engaged with documentary film, especially with the proliferation of streaming platforms.

In the US we are already seeing a fairly rapid shift away from the theatrical distribution model. This has created a new focus on documentary series rather than standalone feature-length projects but also opened up a space for the more ‘hybrid’ or visually driven type of films that I love.

Let’s think of The Challenge by Yuri Ancarani or, although it’s not a doc, maybe even Dunkirk. By really focusing on the language of the image, are these directors saying ‘this is cinema, don’t avert your eyes’? I think you have to commit to really watching these films, not just skimming them.

The European financing model for documentaries still seems more geared to a theatrical distribution model for feature-length projects but I think we will see a shift in that thinking also. Hopefully the likes of Netflix, Amazon etc and the national film financing bodies around Europe can work more closely in the future to reflect these trends.

All in all though, it’s a very exciting time with broad horizons for documentary filmmakers.

Being invited into so many people’s lives is a genuine privilege.

Least favourite part of your job?

Do you prefer working with digital or film?

Both! Realistically I’m only really using film for photography projects these days but it’s pure alchemy. I love it.

How do you approach still images vs moving ones or is your approach different?

They are ultimately very different beasts and although I have done both film and photography at the same time on projects, you always feel that one medium suffers.

With documentary film you are ultimately following a character, or a story, with a narrative to pursue. Perhaps there is more of a rhythm that you are engaged in shooting documentaries; understanding that each little piece creates a greater whole in the edit. There’s rarely a decisive moment.

It’s definitely a longer game. Things that don’t seem super important at the time can be hugely significant later in someone’s life and within the context of your story.

As a documentary maker you have to be alive to this and thus be diligent in your work. Say yes to every scrap of material you can gather as you never know when it can be key to an edit.

With photography you like to believe that the process is more an extension of yourself, more intuitive.

You are watching, observing and waiting for a moment to reveal itself. In contrast to filmmaking there is no past or future tense in a photograph: everything coalesces in the instant. 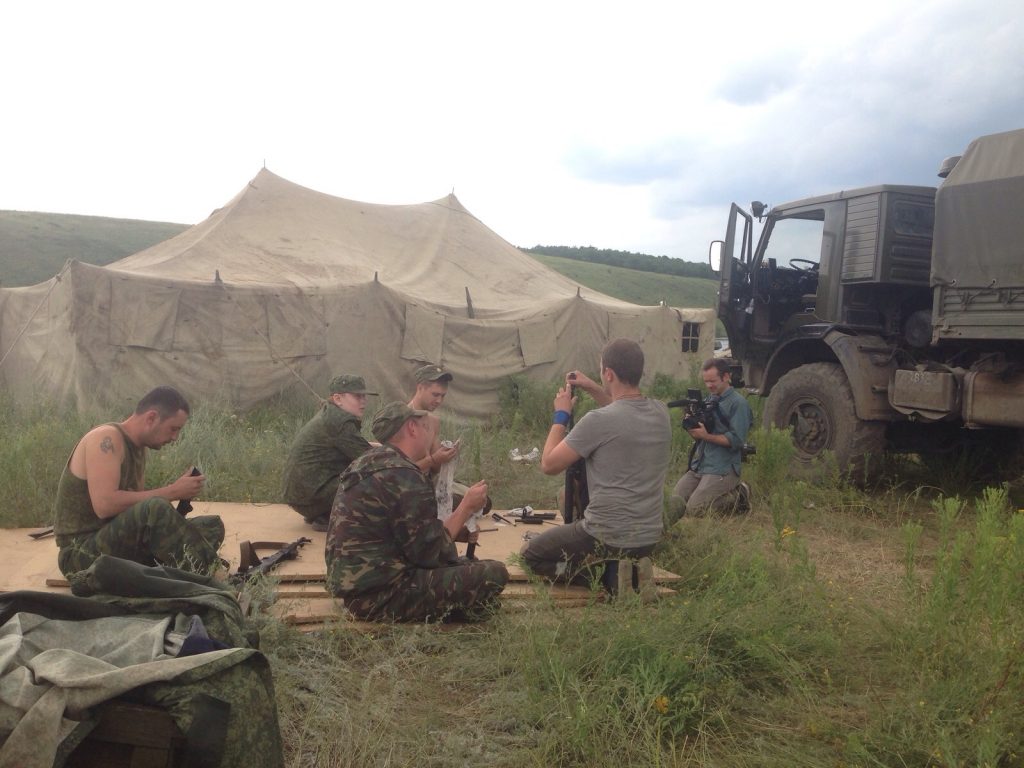 What do you look for in a ‘great’ film?

EVERYTHING! A lot of it just comes down to being invested. It’s the suspension of disbelief. Whether documentary or narrative I want to feel like I’m in the story. I think great writers and directors create that feeling from the get go.

What is your favourite camera to shoot on?

I have an old Rolliflex that is a pleasure to work with.

What kind of project is your dream to work on?

Any kind of project that you feel you’ve tapped into a sensibility or a world that really speaks to you. You feel like everything you do feeds into that world and helps build the story you’re trying to tell in a much richer and complete way.

What is the biggest challenge for filmmakers in Ireland today?

The challenge for Irish filmmakers is to consistently attain the standards our peers and the Irish filmmaking community has set. There’s incredible filmmaking talent both established and emerging in and from Ireland.

What is the biggest change you see coming to film in the next few years?

I guess it’s a question that’s above my pay grade in many respects. Money and shifting distribution models to a certain extent dictate so much of how projects come into being.

As a Cinematographer it looks like shooting HDR will be the next technical load to bear on productions.

What aspect of filmmaking do you admire the most in others?

What has been the project you’ve been proudest of so far in your career?

I think finishing your first film still remains a landmark for any filmmaker. For me “Colony” was my first feature film and we were fortunate enough to have had a really great creative experience making that film.

How was the experience of working with Alex Gibney on No Stone Unturned? Did you learn anything on this shoot you might apply to documentaries you will direct yourself in future?

No Stone Unturned marked the fourth project I’ve worked on with Alex Gibney and he is a real mentor for me, every moment with him ‘on set’ is always a learning experience. One, he is magnanimous and hugely generous as an individual. Secondly he is a great communicator and also a real film fan, so there’s a shared language to help in the process. Finally he both knows what he wants but also trusts hugely in the abilities of everyone involved in his films. A great collaborator.

What’s next for you?

Hoping to finish a new film that’s in process and starting production on another feature documentary this month.

Rialto Cinema Club back biweekly in the Back Room
Love Yourself this September and go to the IFI Documentary Festival 2021
Eamonn Dillon’s short Home Truths gives voice to the victims of the housing crisis
Direct Line with Róisín Kearney
Irish doc Father of the Cyborgs gets official trailer ahead of premiere
Short Cuts tonight with the Rialto Cinema Club
The programme has arrived for the online Virgin Media Dublin International Film Festival 2021
IFI & First Fortnight highlight mental health this January
Review Round-Up: Dick Johnson is Dead and Rocks