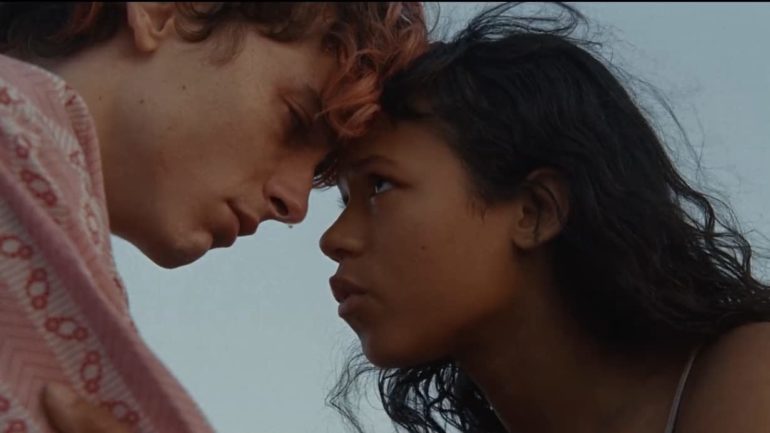 The opening scenes of Bones and All take care to show us lead character Maren first and foremost as a young woman without a strong sense of self. Shy and sheltered, she’s led a life constantly on the move, her mom isn’t in the picture, her father’s strict rules have made it hard for her to get to know people, and by extension, herself. She’s clever and cultured and yearns for connection, so when girls at her new school invite her to sneak out while her dad is asleep and join them for a party, you feel that tentative, but powerful desire, the kind that young people have whenever they really want something. You’re rooting for her when she climbs out the window and heads off to make friends. And when this sweet, sincere scene of kids coming of age turns into ravenous, unrelenting bloody violence, you understand why Maren hasn’t experienced it before. Growing up bites, especially when you’re a cannibal.

Adapting the YA novel by Camille DeAngelis, Bones and All sees Luca Guadagnino in straightlaced, serious form telling this story of a kid cannibal on the run. There’s a lot of room to ponder allegory in the premise, Maren cast on the cusp of adulthood as something bizarre, unknowable, grotesque, a life that she has to figure out all for herself, and Guadagnino’s approach seems to keep that open-ended, avoiding specific interpretation that could come from being too arch. When her father (Andre Holland) vanishes, leaving a tape in explanation, money and information about her mother,  Maren (Taylor Russell) sets out across the American landscape, in the hope of understanding where she came from, who she is, and how she is to live as an ‘Eater’. Along the way, she discovers that there are others like her, principally the unsettling Sully (Mark Rylance), whose vibes are off even as cannibals go, and Timothée Chalamet as Lee, an aloof bad boy with a heart of gold.

Maren has her eye (or rather her nose, Eater’s been particularly scent-driven) on Lee early on, and Taylor Russell’s performance sets the pace for their relationship, earnest and allured. She pushes him, challenges him, but never too hard, a person trying on asserting herself, and drawing someone else out, for the first time. Russell is quiet but never shrinking when sharing the screen with Chalamet, bringing the audience in to her character’s tentative, curious, conflicting feelings. When she can’t bear to listen to the harsh words of her dad’s tapes, Russell moves like she’s gotten an electric shock, a violent, sudden rejection of what she’s hearing. Like Sasha Lane in American Honey, her character’s journey of discovery has an innocence to it, but not naivety. With a held gaze and a set jaw, Russell plays Maren as someone setting out in the world, politely but firmly demanding that it reveal itself.

Guadagnino’s camera shifts between modes, cinematographer Arseni Khachaturan bringing plenty of wide shots and slow zooms into Maren, bringing out her isolation. At other times its firmly rooted in her point of view. A scene of Maren getting to know Lee at a diner uses quick close ups to take in what she’s taking in. His wiry, tattooed arms. A little girl eavesdropping on their talk about eating people – should she be more careful; does she actually want to be? It’s an assured performance, introspective but strong – similar to Kirsten Stewart in Twilight. Guadagnino’s moody shots of the American Midwest, the just off beat hesitation in conversations between Lee and Maren and all-in adapting of YA material might put a smile on Catherine Hardwicke’s face, it could be that the age of Twilight influenced cinema has finally arrived.

We see how easily Lee melts under Maren’s watch. Teen angst is a good fit on Chalamet, his teeth-clenched deliveries and stiff body language always suggestive of a guy whose emotions are about to explode from just below the surface. His chemistry with Russell is strong, but possibly even more important is the way Chalamet’s performance shifts around Lee’s sister Kayla – unclenching, relaxed, the contrast gives us a better understanding of who he is. Maren and Lee’s drive across America to track down her mother quickly becomes a series of romantic vignettes, two withdrawn people wrenching themselves free to show the mess inside to each other – as difficult to stomach as the man-eating aspects might be, this simple pairing of form and function in their love comes through, the intimacy and vulnerability that comes from revealing yourself. The danger on the outside informs the danger felt on the inside, and the cold, empty landscape the pair travel through makes the need to connect that more urgent. In that way the strange, heartfelt if not healthy love comes through in the Guadagnino’s CanniBadlands.

There are constraints, the source material giving a rigid structure that feels at odds with the presentation. Rylance is suitably creepy, but his tic heavy character doesn’t always feel like something from the same movie, and the more his appearances skew towards a Big Baddy to be taken down, the less naturalistic Bones and All’s story feels as a whole. Sinister in a more functional way is an appearance by Michael Stuhlbarg and David Gordon Green as unwelcome intruders to Lee and Maren’s budding romance, an intrusion into something beautiful by something cynical, corrupt and craven.

The hunger of love, the warmth that comes from feeding it and the longing that comes from needing it, comes through in the strangely sweet Bones and All. With strong leads and a good showing from Guadagnino, clearer and more confident in his intent than in the lush but loopy Suspiria remake, it’s a filling meal, not afraid to turn a few stomachs.