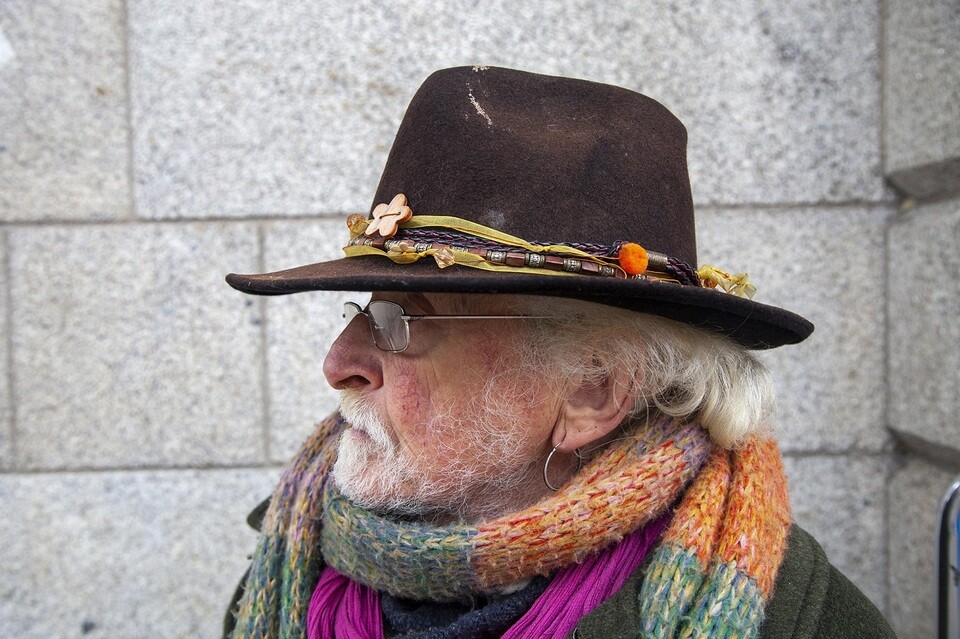 One of Dublin’s most recognisable faces gets a moment in the spotlight in The Peculiar Sensation of Being Pat Ingoldsby. The poet, a fixture on the streets of the city for decades, is interviewed along with close friends and family in Seamus Murphy’s documentary. It allows for a deeper understanding into the art of a man who sold books next to handmade signs that read ‘don’t ask me what are my themes because I haven’t the faintest idea’.

From his childhood in Malahide, through to work as a radio DJ and children’s television presenter on RTE and his efforts selling books of his poetry across Dublin, the film logs Ingoldsby’s life. The need to ask a poet about their themes can be capably removed if they’re allowed enough space and freedom simply to talk about themselves, and Ingoldsby is an enthusiastic interviewee, full of charm and a skill for storytelling. He is also blunt and open. When he talks about getting a smack from his parents just before having to smile for a family photo, or about the awful anxiety of having to come up with sins for confession, there’s nothing leading to it, no concerted effort to shape his own narrative. The stories speak for themselves. From Ingoldsby’s open interviews with Murphy, along with warm recollections from those closest to him – old friends, his sister and brother, we’re allowed to be charmed by our subject without tipping over into hagiography – you get the sense Pat wouldn’t stand for it.

By the nature of the poet’s aged years, we get a tour through Ireland’s history – the hold of the church, the disquiet around mental illness, the increased acceptance of LGBTQ people. These are all absolutely relevant to Pat, an accepting outsider, but they do broaden the focus. It’s a challenge facing a few Irish docs now, of how to contextualise our country without reeling in the years. Where his story most satisfyingly folds into a bigger picture is in how Dublin itself is changing, how the people that, together, made it what it was are increasingly pushed out to create something with less edges, more consumer friendly.

Pat sits in what was once a favoured spot for selling his poems – it’s a betting shop window now. He talks about the fruit sellers whose prams he used to mind while they nipped to the bathroom, and the demands of the Ilac Shopping Centre owners that they be moved on. His love of experiencing life on the streets – a vantage point for his work, a meeting point for new friends and genuine experiences – is highly valued by Pat. He’s delighted by the ways he’s seen things here change for the better, but all to aware that the things that make him and Dublin so peculiar are things those with more say would rather do without.

Pat’s observational talents and blunt manner of speaking are perfect for capturing this change, and his own sombre feelings about never quite belonging reverberate in the fading Dublin that he describes. For a patient, friendly observer, we feel him increasingly on the edges of the city he loves so much even as it expands into expense, the capitalist bore we know and endure today. Having better introduced us to the man, the film begins to lay in the oncoming feeling of loss.

As director, Murphy gently boosts his subjects’ words visually. We see the life that still exists in Dublin’s streets, quick flashes of characters over Ingoldsby’s voiceover. Footage is kept of a homeless woman getting right into the camera and saying that she hates living on the streets of Dublin. An honest portrait is painted both of the poet and the place that inspires much of his work.

Unfussy and illuminating, The Peculiar Sensation of Being Pat Ingoldsby makes for a worthy companion to the work of the man himself. It’s a little weird, a lot witty, all with an emotional undercurrent that deserves more attention.