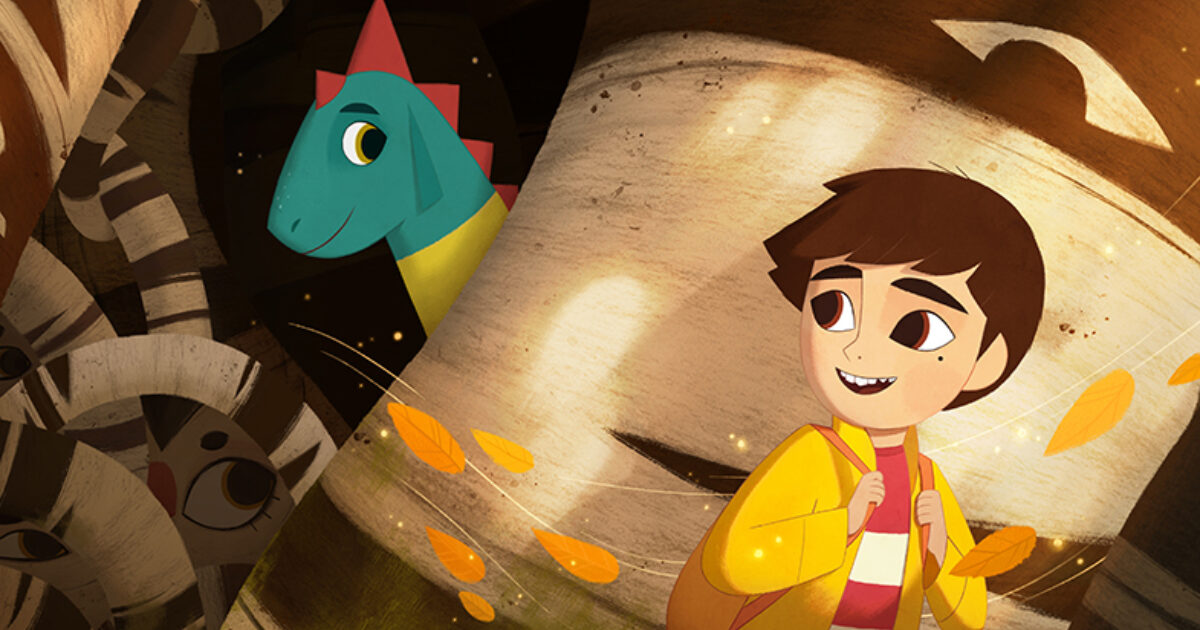 As part of the Cartoon Saloon dynasty, Nora Twomey has been one of the leading lights in animation over the past decade. Her last film The Breadwinner was a beautiful exploration of a young girl’s life growing up under the Taliban in Afghanistan, an Academy Award nominee that continued the Kilkenny animation studio’s stellar reputation. Their high demand has brought them to Netflix, where Twomey’s latest feature My Father’s Dragon will be dropping later this month.

Runaway Elmer Elevator searches for a captive dragon on Wild Island and finds much more than he could ever have anticipated in the charming looking animated film, inspired by the Newbery-honored children’s book from author Ruth Stiles Gannett. Gaten Matarazzo of Stranger Things and Room’s Jacob Tremblay head a voice cast that includes Ian McShane, Whoopi Goldberg, Chris O’Dowd and more.

Graham Day met up with Twomey to chat about this world of magic and dragons.

Where did it all begin for you when finding the story of My Father’s Dragon?

So, 10 years ago I met the producer Julie Lynn, who had just finished shooting a film in Dublin called Albert Nobbs, with Glenn Close. When she was a child she read the book, which was first published in 1948. Then she and her husband read the book to their children. Meg LeFauve, their incredible screenwriter, along with her writing partner, John Morgan, they had all read it. It’s quite well known in the States and is considered a classic.

Back in 2012, I didn’t know the book. Julie had just seen The Secret of Kells and wanted to put these two things together, this book and this studio that she both really loved. I read the book and I got stuck on a particular page early on, where Elmer is giving saucers of milk to a cat.

His mom gets really angry with him about this, and I just started to read kind of between the lines and into the blank spaces in the page as to what was going on in his mom’s life that a saucer of milk was a big deal, what’s going on in Elmer’s life when he sees flashes of somebody that he probably doesn’t recognise when he looks up into his mom’s face. That coming-of-age story, but one that involves fear and control and the loss of things that are comfortable to you, having to set out into a part of your life where your parents or the adults in your life don’t have the answers anymore. You have to find those answers yourself, along with people that become close to you, that you can be vulnerable with and that you can be truthful with.

What was the collaboration like working with Meg and John, on making sure that you brought a faithful adaptation to Ruth’s work, while adding your own creative stamp to it?

This film is very much inspired by, rather than an adaptation of My Father’s Dragon, because the book is one of three books in a trilogy, but the first book ends with Elmer, just having rescued Boris and then just about to leave Wild Island. I knew even from the first time I met Meg and talked with John and Julie, that they already wanted to spend much more time on the screen in the middle of that relationship between Elmer and Boris.

There’s something about the magic of putting the audience right in the centre of that transformative relationship. We knew that’s where we wanted to spend the screen time as well as on Wild Island, because it is such a fantastical place, it’s almost a character in and of itself. We adapted the spirit of the book and the spirit of Elmer being a child who thought for himself, was able to be truthful with himself, eventually, no matter what the cost to him. Those were more important than a page-by-page retelling. I went to visit Ruth a number of years ago in upstate New York.

She talked a lot about resilience and his autonomy. Back in 1948, when the book was first published, these were not things that you would take for granted when you’re dealing with a book that’s for children. Ruth never talks down to her audience, even when I met her, she’s 99 now, she places such importance on the imagination of children, on her own imagination and on my imagination. She was just such a force and such a brilliant storyteller, I knew that if I managed to just capture some of the essence of what she’s about and put that up onto the screen and made that the centre of Elmer and Boris’ relationship, then the film could be its own thing, while respecting the spirit of the book.

You spoke there on the relationship of Boris and Elmer, how important was it when casting them? Jacob, and Gaten are wonderful young actors with incredible talent, what was the journey to get them in?

We were working away on the script and the development phase for this film took a long time. In the meantime, in the studio, we went on to finish Song of the Sea, produced The Breadwinner and Wolfwalkers, all as My Father’s Dragon started to get up and going. So, it was something that Meg revisited. That periodically, up until the point where we took it to Netflix, and there was a strong response with Netflix and so we knew that that would be a really great partnership for the project.

In terms of the voice work for the film, my first idea would not be to go for the biggest stars that we can get. Oftentimes you can not have great access to people like that – you might get one or two opportunities to record but not much beyond that. Plus, if it doesn’t work, you’re in trouble! But Amy Lippens, our casting director, really encouraged me to imagine who does the character sound like in your head? I would say okay, well Saiwa is an Ian McShane type of personality or whatever. And she’d just go and ask them, you know, and they all said yes, including Rita Moreno and Dianne Wiest, Alan Cumming and Chris O’Dowd.

With Jacob and Gayden in particular, Amy was just amazing imagining how those characters kind of locked together in terms of their voices at the time, they were coming from different sides of puberty, Jacob was just turning 13. Gaten was just turning 17 and so you got that sense of the fact that they didn’t really have control over their performances. Gaten’s voice would often shoot up an octave, he’d apologise and go back and do the line again.

Gaten and Jacob are incredibly professional, but they’re still kids too. So the first thing they did when they got into a room together to record, they had microphones and headphones, you can hear the other person’s voice really clearly, can hear them swallowing, all their mouth noises. Jacob, of course started laughing hearing Gaten’s mouth noises and then they just started laughing at each other. They were so professional that they knew that they should laugh into the microphone so that I can use those laughs, because there’s nothing like a real laugh in a film. You can’t fake it.

When you bring that to the animators and say, okay, you’ve got to spend a week now animating four seconds of this performance and you have a performance like as powerful and truthful as that, they were just so energised by it. They were able to lean into it 100%, bringing the physicality to the performance that’s suggested by the voice work.

Cartoon Saloon is sensational when it comes to character design and animation. With My Father’s Dragon what kind of steps did you take to further evolve your skills?

My Father’s Dragon looking at the book and the way that Ruth had approached it, even calling a place ‘Nevergreen’, it’s kind of everywhere, and nowhere. The same with Wild Island, it seems like a childlike imaginary place. We centre this entire film inside children’s imaginations, there’s a naivety, a beautiful naivety to the illustrations in the book.

What do you hope older audiences as well as younger audiences get out of My Father’s Dragon?

I think this film is very much a film for people who don’t know what’s around the corner. We were at pains to not do the regular Hero’s Journey thing with Elmer where he gets everything that he wants. We don’t need patronising stories that tell us that everything’s going to be fine. However, we also don’t need to be thrown into boiling water! I think we need stories that reflect the uncertainty of our times, but in a compassionate way. What I do love about this film is that nobody’s entirely good and nobody’s entirely bad. There’s a sense that you can tell where each of these characters are coming from no matter how frightening they may seem. They’re all coming from a place of real concern.

I think that whatever your age is, you’re going to get something out of it. At the premiere of this film in London, there was a child in the audience in front of me, whose parents were kind of leaning in every time things got a bit intense on the screen. At a certain point, I think about 20 minutes into the film, that child was just standing up. The next time the mom leaned in, the child pushed the mom’s face out of the way. There’s a sense that stories are supposed to kind of wrap us in cotton wool and tell us that everything is okay.

The ones that stay with you don’t do that. They tell you things are tough, but you have the resources to be able to deal with them. The good stories are companions that stay with you in tough times. Certainly, the best stories for me, have always been that. They’re the ones that I remember in my darkest days. As a filmmaker, that’s what I always want to do, be part of a legacy of companionship for people in uncertain times.

My Father’s Dragon is in Irish cinemas now and arrives on Netflix from 11th November.

Where to watch My Father's Dragon