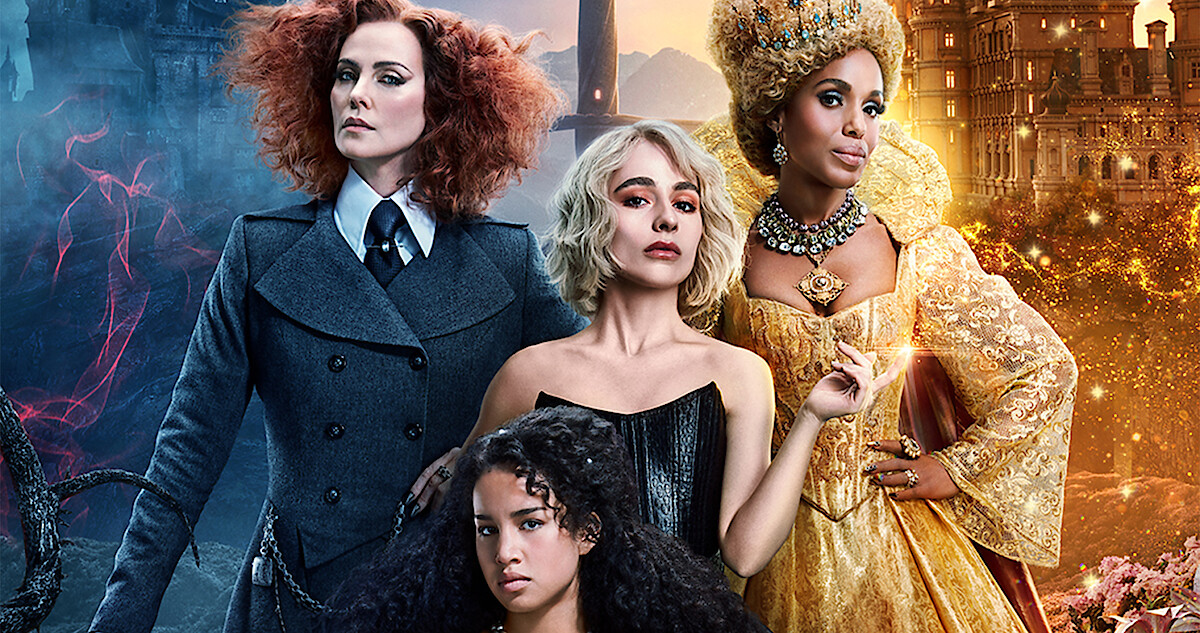 The School for Good and Evil is coming to Netflix. Directed by Paul Feig and based on a New York Bestselling series, the film deals with good, evil and everything in between. Graham Day sat down and chatted with the director, to find out about all the good and bad elements that brought Feig to this new film project.

You’ve done so many genres now. Comedy, supernatural, spy and action. What interested you going into fantasy?

I am trying to work my way through all the genres. It’s a goal of my career, but fantasy is one I never thought I was going to do, but I loved this script so much. I loved the story so much, you know, and I’m always looking for projects with great roles for women. I just thought this friendship between Agatha and Sophie was so wonderful and had so much to say about not giving up on your friends and the power of friendship and all that, which is a lovely theme.

That coupled with the idea of the meditation on good and evil and what is good, what is evil? Especially in this very divided time right now we live in. It’s nice to have something where the message is we’re all humans, we’re not all good. We’re not all evil, we’re a mix of everything. So, I think that and then coupled with the idea that I could build, for the first time in my career, an entire world from the ground up. I got to design this and design that. Every single thing and that was really, really intriguing to me. That’s when I was like okay, I got to do this.

What kind of challenges did that bring? You’ve worked with special effects and action before but not quite to this scale.

It was fun. I mean, I really enjoyed it, you know. I mean, we did a lot of that kind of stuff, that fusion on Ghostbusters, but not to this extent. This was even more kind of managing effects versus practical because a movie like this, there’s just effects everywhere and a lot of them you don’t even know they are effects.

Also, I really didn’t want to get into green screen situations and get into people acting against tennis balls and all that, so we really made an effort to do as much practically as we could, so we built those sets. They are all practical. There is very little green screen extension on it. For example, we had things like the wolf guards. We made them animatronic, they’re actually there.

I always say to people who are trying to talk me into using CGI – Chewbacca, one of the most beloved characters in movie history is just a guy in a fur suit. So, I wanted that to happen when the actors had to act with them. That they were not fully CGI. We built giant puppets and had puppeteers. So at least they’re reacting to something that’s real, and we’re shooting some of the real versus just leaving it to the VFX team.

You spoke there on the friendship that’s at the core of this film. What kind of difficulties were there to cast Sophie and Agatha and how did you end up finally getting Sophia Anne Caruso and Sofia Wylie?

You live and die in these movies, obviously, by your main cast, but I had seen Sophia Anne Caruso on Broadway, at least a year before I even read this script. I remember just saying, I just saw this woman and she’s so great and we got to use her in something. She was already in my brain. So, when I read this script it was like, wait, this is the perfect role for Sophia Anne but then we went through standard casting for Agatha and saw tonnes and tonnes of young women for that, but it was really Sofia Wiley’s auditions. It just touched me. I just thought she had everything. Agatha is a really interesting character. She’s kind of the audience, you know, Sophie is so all over the place that she has her head in the clouds. But you know, you need Agatha to be grounded and be like, this is crazy, you know, and still be a good actor. So, the two of them, it just happened so naturally.

I will say one crazy thing was usually before you cast two people, you have to do what’s called a chemistry read, where you get the room together, and we’ll see if they actually had that chemistry on screen. But because it was COVID we had to do it on Zoom. They do these scenes to Zoom, and they had such chemistry. I was like, wow, if they can have that much chemistry on Zoom then we’re in great shape and it worked out well.

They’re surrounded by an incredible cast, Charlize Theron, Kerry Washington, Michelle Yeoh and Laurence Fishburne to name a few. Was there any dream casting for a particular character?

I think I never will cast anybody unless I’m like oh my god, this person is so great. A particular person though was Kit Young who plays Rafal. We saw a lot of people for that role and Kit was the one who brought everything to it and so I was really at certain points, I’m not doing this movie without Kit. So that was cool. Also, away from our giant stars, Mark Heap who plays Professor Manly, I can’t gush enough about him. I’m such a big fan of his. I just had been watching him on Upstart Crow, which is so funny, and I was like, can I get Mark Heap in this movie? The fact that he did it was great. It is those kinds of castings I get really excited about – people audiences don’t expect.

You spoke on the kind of humanity that’s being brought into this fantasy realm. What was it like dealing with the moral greys in a world that’s supposed to be black and white?

It was great. That really is the point of the whole movie. And it’s fun, too. Like any movie, where you meet stereotypes then suddenly, they become not stereotypes. Oh, there’s a third dimension with these people, and I like that. I like that Tedros (Jamie Flatters) goes from being very one dimensional, just sees black and white to actually having this awakening. Then you have Sophie who goes through this fire. Even the professors at the school learn to grow. It was just that fun balance of how do we slowly chip away at people’s preconceived notions? In a perfect world I hope we can do that in real life and we can all get along better than we’re getting along.

There’s a weight of responsibility when it comes to adapting books. You have Harry Potter, you have Percy Jackson, you have Artemis Fowl? All of those kinds of films. What was it like for yourself adapting this series?

Well, it was difficult, it was a hard one because the first book is massive. There’s a lot of stuff in it, and you got to figure it out. It can’t be 20 hours long, and it can’t cost a trillion dollars. How do we do it? It took a long time, a number of years. It was being developed years before it even came to me and then when it came to me, it was in really nice shape.

Then I went in and did all my rewriting on it to take it to what I thought was the next level and to really make it work for myself. Also, to make sure that we were able to have the connective tissue of things we took out, but then invent new things in order to make the story more vibrant, and in its shorter version. Honestly, all the way up until, you know, a month ago, we’re still writing stuff and writing lines, and you know, say this. We were putting stuff on somebody’s back.

You kind of never stop. These are like a living, breathing organism and that’s why it’s important to me to make sure we do test screenings, get it in front of audiences, when we’re putting it together. It is hard, because they’re watching a movie that is missing special effects. But I always like if they can enjoy the story and feel the stakes. Without that, then once it’s all gussied up, then that will be in good shape.

What was it like collaborating with Soman Chainani the creator of this story, as a creative to another creative on this film?

He’s great. I love to have the writers on scene when I do movies that were written by people other than myself. I always want to have the writers there. This situation where he’s the author of the book, you know, I always want that. The only danger is sometimes somebody will be so precious about their work that you can’t change this. Soman is so the opposite of that. I mean, he’s just like, you don’t need that and don’t worry you can change that if you want.

It actually got to the point sometimes where you’re like oh no, let’s not change that. Let’s not throw that out. I always kept him very close, I would always call him, especially when I was making some big decision or changing something. I would ask is this cool? Other times I would ask, what are the fan’s favourite scenes or what are the fan’s favourite lines? Now I don’t want to be total fan service because you know, I got burned on that a little bit on Ghostbusters. However, you also want to make a movie that is going to bring in a whole new audience. I mean, a lot of people know these books, but there’s a lot more people who have not read them yet. And those are people I want to bring in.

It’s a big book series, it’s six books at the moment. Are you hoping to continue that journey or are you okay with letting someone else take the reins for the next film?

I would love to continue it. Once you build the world and you get to bring these characters to life on the screen, they become like family you know. Plus, you’re afraid to sort of hand over the reins, so it’d be really fun to do another one of these and this is definitely set up be a franchise.

The School of Good and Evil arrives on Netflix from Wednesday 19th October.