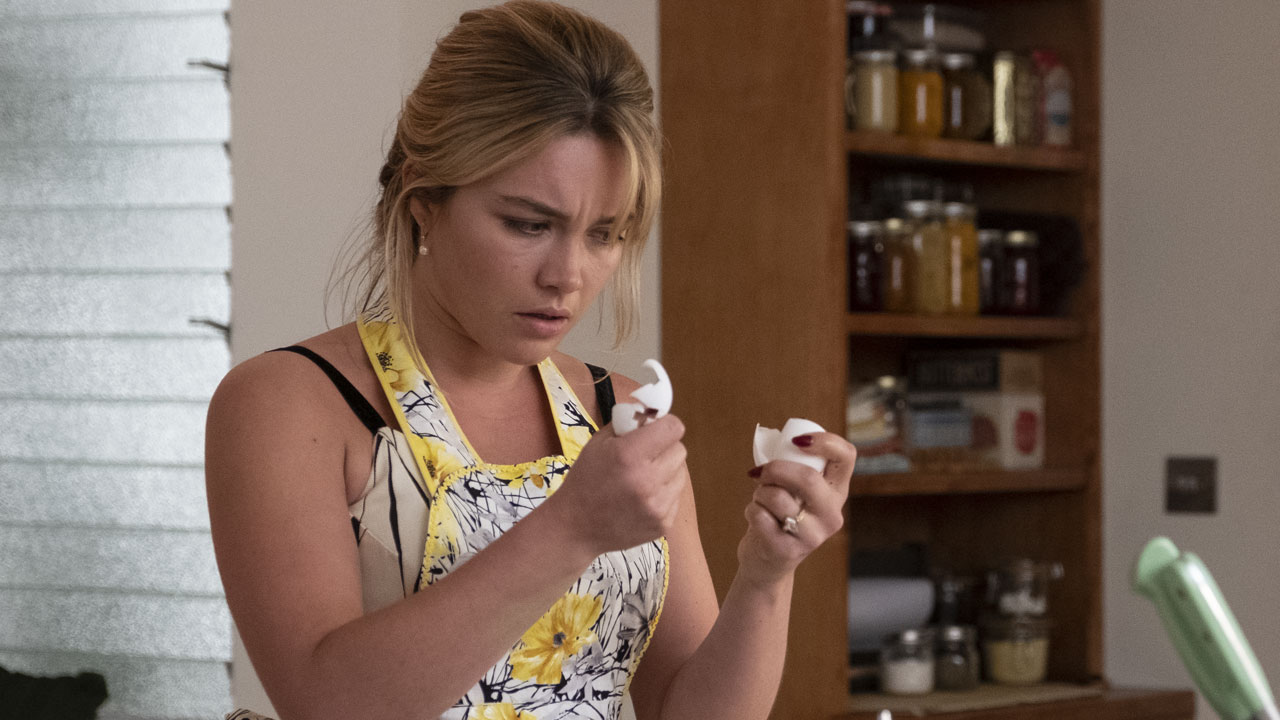 It’s such a head f*ck trying to evaluate art with a female protagonist, starring one of our most talented young stars, and to now have that performance completely overshadowed and undermined by the media circus surrounding what Florence Pugh was trying to accomplish. The naive among us thought that the #MeToo movement was going to pave the way for meaningful change within the industry. That those women and men laying bare their pain for us all to see, exchanging spectacle for a bit of humanity, would be worth it because it would create radical change. Instead, the same dynamics still play out and PR plays a misdirect by telling us it’s all so progressive because another woman is at the helm this time.

I won’t give too much of the plot away but Don’t Worry Darling tells the story of Alice (played by Pugh) and Jack Chambers (played by Harry Styles), a bright shiny young couple living with a bunch of other attractive families in the Victory Project which is an enclosed suburban-style community surrounded by desert. The community is the brainchild of Frank (Chris Pine’s character), a charismatic businessman idolised by all the men in the town.  Alice and Jack’s life together in Victory seems to be delivering the trad-wife daydream many on the internet have been craving of late, a throwback to the 50s, but a version where women get all the cunnilingus they can handle when their husband gets home from his busy day. The film leans into the ahistorical sensibilities of the trad-wife fantasy; the set design and costumes flirt with elements from the 20s, 30s, 40s, 50s, 60s and sometimes 70s. This lack of specificity contributes to the artifice of the strange town of Victory, suburban with no proximity to the urban, socially conservative but uber sexy, which helps to build a mysterious and uneasy atmosphere. Don’t Worry Darling spends the whole runtime screaming “everything is not as it seems”.

Florence Pugh’s performance is well crafted here. She’s playing a stay-at-home 50s style homemaker and as a result a lot of her scenes play out by herself which can be a challenge. As usual she’s compelling and keeps us onboard during sparser domestic scenes. We get an iconic scene that shows us a clear power switch between Alice, Jack and Frank. You’ll know it when you see it. I haven’t seen a visual transfer of power so memorable since Jackie Brown where Jackie and Ordell face off switching lights off and on. It’s a shame that the momentum built between Pugh and Pines doesn’t have such a satisfying conclusion. The film’s promotion and aesthetics make it clear to audiences that there will be a plot twist, and while we do get surprises, Don’t Worry Darling tries to twist and turn so much in its third act that it twists itself into knots.

Don’t Worry Darling serves as an antidote to Passengers, an ill-thought out romance with a somewhat similar plot from 2016 starring Jennifer Lawrence, another talented actress we all decided we were sick of because she was… in the media too much? Or because like Anne Hathaway people turned on her down-to-earth persona. When you’ve seen Don’t Worry Darling, you might agree that it starts similarly to Passengers but ends very differently. It rings pretty hollow to be given films with more progressive plots if it’s still at the expense of the actors or crews. Everyone working on a film, whether in front of the camera or behind it, deserves to be in a psychologically, physically and sexually safe environment and it’s frustrating that Olivia Wilde seems to have compromised on that to tell a story about abusive men. Miss Flo does well with the part regardless and will no doubt go on to bigger and better roles.