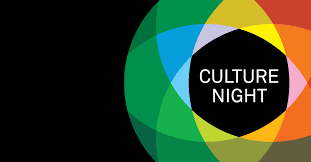 The seventeenth edition of Culture Night is taking place next Friday 23 September 2022.

Presented annually by the Arts Council; Culture Night is a national showcase for the artistry across Ireland, seeking to promote the belief a varied culture is alive, treasured and nurtured in people’s lives, today and every day.  It is delivered nationwide in cities, towns, villages and rural locations as well as online, with over 1.1 million people engaging with Culture Night last year.

Culture Night is a multi-disciplinary affair, with every aspect of the arts covered. If you’re in the fair city of film next Friday, there are plenty of interesting events, and we’ve gone through this year’s programme to pick out what, when and where the best events for movie lovers are at Culture Night 2022.

If Fridays are your movie night, there are a number of feature films screening throughout the county, old and new, Irish and international. Summer of Soul (or, when the revolution could not be televised) is one of the finest concert films we’ve seen in the last few years. Questlove chronicles the iconic and underseen Harlem Cultural Festival of 1969, which saw legends like Stevie Wonder, Sly and the Family Stone, Gladys Knight & the Pips, Nina Simone and more perform. The performances are sensational and the film is more than just a music documentary, reflecting on the Vietnam War, the assassinations of Malcom X and Martin Luther King, the Moon Landing and the Black Panthers’ movement. Highly recommended, it is screening from the Pavilion Theatre in Dun Laoghaire from 9pm on the night – booking is required. https://culturenight.ie/event/summer-of-soul-or-when-the-revolution-could-not-be-televised-screening/

At 6pm the Civic Theatre, they’re presenting Songs of Change, a feature with ten new songs on the theme of identity, community and our journey through life, inspired by the idea of change. On the 18th March 2020, The Civic Theatre along with all other cultural institutions followed government guidelines and closed its doors. Silence settled into the corners of the building. No voices rang out from the stage. There was no heady buzz of conversation in the foyer. The Tallaght theatre reached out to local citizens to explore the idea of change. Inspired by the words of local participants, brought to life in music by artists such Jess Kavanagh, Shiv, Toshín, Ellen Quinn Banville, Farah Elle, Maria Kelly, Síofra Nolan, Sinita, Faye O’Rourke & Debra Salem. Made possible through the kind support of Arts Council Ireland. https://culturenight.ie/event/songs-of-change-screening/

One from Werner Herzog’s extensive back catalogue is showing as part of the Goethe Institut’s entertainment. Marking the infamous German director’s 80th birthday, they’re screening Fitzcarraldo. Starring Klaus Kinski and Claudia Cardinale, it tells the incredible story of Brian Sweeney Fitzgerald, an obsessive dreamer and opera-loving fortune hunter who is determined to bring opera to a remote trading post in the heart of the Amazon jungle. Starting at 7pm from the Institut’s HQ on Merrion Square. https://culturenight.ie/event/werner-herzogs-fitzcarraldo-screening/

For the burgeoning film fan in your life (the kid you make watch Fantasia instead of Encanto), there are fun events to bring the whole family along to. Back at the Pavilion Theatre from 4pm, short films from around the world will open up imaginations. The selection is suitable for ages 8+ and are accessible through subtitles or a lack of dialogue, letting young viewers immerse themselves in the images. https://culturenight.ie/event/pavilion-theatre-shorts-for-middle-ones/ At 5pm in Goethe, they’re showing the latest entry in German children’s crime and adventure series The Peppercorns – with this edition – The Secret of the Deep Sea – seeing the gang in Northern Ireland. https://culturenight.ie/event/the-peppercorn-and-the-secret-of-the-deep-sea-2021-online-screening/

A really charming homegrown effort will show the creativity of young kids in Tallaght. The Legend of the Yolk Dragon is an animated short, made as part of the Myth Makers programme with Ready, Steady SHOW! In January Candleit Tales brought the Myth Makers project to Tallaght Community National School. Working with Miss Hickey’s class and illustrator Beibhinn McCarthy the group created the awesome story of mythical The Yolk Dragon! Tonight as part of Culture Night we celebrate imagination and the power of storytelling. Screening will take place on the hour from 5pm in Library Square. There will also be Make your own Mythical Monster workshops running in the gallery space in The Civic. The event overall is starting there from 5pm. https://culturenight.ie/event/myth-makers-a-large-scale-screening-of-the-awesome-story-of-the-yolk-dragon/

Part of the power of Culture Night is that it allows communities to showcase themselves on their own terms and turf; illuminating their image through their own creative impulses.

An example is RADE – Recovery through Art, Drama & Education, a community arts project for people who have experience of problematic drug and/or alcohol use. RADE has worked with over 500 people since it was established in 2004. Based in the Liberties, RADE will open its doors at 4pm for people to view a displayed selection of artwork and screenings of award winning short films. RADE participants and staff will be available to discuss the project. https://culturenight.ie/event/exhibition-and-screening-by-rade-rade-participants/

At 8.30pm, the Transgender Equality Network of Ireland (TENI) will host an open screening of the award winning Irish short film Punch Line, directed and co-written by Becky Cheatle. “On the night of a transphobic attack a transgender comedian processes her feelings the only way she knows how, via stand up comedy.” This will be followed by a screening of the feature length documentary Major! which explores the life and campaigns of Miss Major Griffin-Gracy, a formerly incarcerated Black transgender elder and activist who has been fighting for the rights of trans women of colour for over 40 years. https://culturenight.ie/event/teni-screenings-punch-line-major/ While as part of this year’s GAZE LGBTQ+ Film Festival, Irish shorts will be screened at Outhouse on Capel Street. https://culturenight.ie/event/gaze-film-festival-presents/

At Ballybough’s D-Light Studios, film’s showing the in-house talent of the interdisciplinary dance studio wil be shown from 6pm (booking required) https://culturenight.ie/event/d-light-studios-housemates-takeover/, while an interesting talk on Dublin’s cinematic history takes place in Clondalkin Library at 6.30pm (again booking required here). ‘Lights, Camera, Action’ is a talk on the history of the Tower Cinema by Patrick Ging. Part of Dublin’s increasingly lost history of more suburban cinemas, the Tower was located in the outer west Dublin district of Clondalkin in The Square on Main Street. The Irish Omnibus Co. garage was converted into the Tower Cinema by architects Laurence Ging and Thomas Ging. It opened on 9th April 1939 with Lionel Atwell in “Mystery of the Wax Museum”. It initially had 350 seats, and was later expanded to 480 seats. Here more from Patrick about his families history with this former landmark next Friday. https://culturenight.ie/event/lights-camera-action-a-talk-on-the-history-of-the-tower-cinema-by-patrick-ging/

Whether you’re looking to break into the industry, want to be an actor for a day or are curious about the in’s and out’s of an Irish production studio, Culture Night has you covered. The Gaiety School of Acting is hosting workshops on Acting to Camera at 6pm and 8pm, book now at https://culturenight.ie/event/acting-for-camera-class-at-the-gaiety-school-of-acting/, while at Barnardo Square, actors who have pushed themselves behind the camera will show their work. 5 shorts from Screen Ireland’s Actor as Creator Scheme will screen at 8pm. https://culturenight.ie/event/fis-eireann-screen-ireland-the-actor-as-creator-shorts/

Director Tara O’Callaghan let us know what readers can expect from the Motherland creative showcase at Hill Street, Rotunda, with doors from 7pm:

Motherland is inviting everyone to our gaff on Culture Night to view a selection of works curated and presented by three of our directors. Come down for chats, drinks and popcorn to see what work our directors are loving right now.

Works chosen by Tara will be shown from 7.30, Ellius Grace from 8.40 and Sam McGrath from 9.30. https://culturenight.ie/event/we-are-motherland-screenings/

RTÉ are cracking into the archive in Temple Bar from 5 for a visual treat. ‘Ireland on the Box’ is a free exhibition celebrating six decades of television in Ireland. A collaboration between RTÉ and the National Library of Ireland (NLI) curated by RTÉ Archives will explore entertainment, drama, sport, music, education and news and current affairs programming, through RTÉ’s remarkable collection of photographs. From ‘Roll it there, Róisín’ to ‘A nation holds its breath’ and from ‘Well, Holy God’ to ‘Coola Boola’, iconic phrases from popular TV programmes and national moments of celebration connect visitors to recent shared cultural history, represented in images that feature the many familiar faces that have graced Irish television screens throughout 60 years of RTÉ television.

Finally the next-gen of filmmakers will start to show themselves as part of the TU Dublin Culture Festival. At the TU Dublin East Quad from 6, TU Dublin welcomes audiences to its new campus. All 5 floors of this new multi-disciplinary arts building will be filled with exhibitions and performances by the staff & students of the Faculty of Arts & Humanities. The School of Media will host an open house featuring screenings of graduate films & radio productions, alongside talks and demonstrations. https://culturenight.ie/event/tu-dublin-culture-festival/

Plot your trail and get more info from the Culture Night website – and let us know if you’ll be attending any of the events above this year.