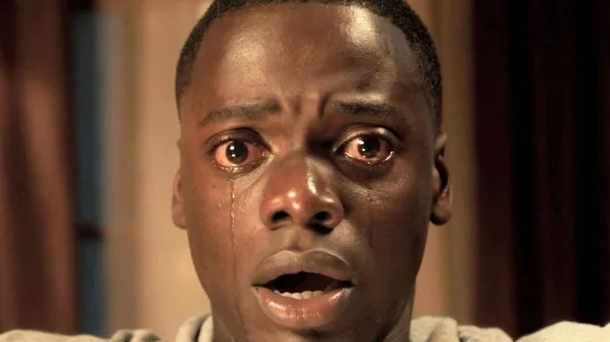 We hear a lot these days that movie stars don’t exist anymore. They’re on-screen victims of the endless IP onslaught, unable to sell tickets and steal hearts off their own wattage alone. But is that really true? Not to suggest that it’s the pictures that got small, but there’s so much ‘content’ rolled out all the time, so many forms of media constantly at play in the monoculture, that it’s harder to focus on one star for too long, making them harder to see in the polluted cultural sky. In 5 Star Scenes however, we’ll be making the case for some current gen gems, using big moments from actors’ filmographies that illustrate their star power.

One such star is Daniel Kaluuya. The Camden Town actor has always had a creative steak – he started out writing a play about two pals working in McDonalds when he was just 9 years old – and since breaking out as a leading man in the 2010s he’s captured audience’s attention over and over again, snagging a BAFTA and an Academy Award in the process.

Steve McQueen has described Kaluuya’s on screen quality, “He has that gift you don’t see often, a presence even in his stillness. You feel what he is feeling, you see what he is seeing.” Subtle and steady, Kaluuya holds sway even in ensemble casts and complex stories, an elevator of an actor with more heights still to hit.

Kaluuya has said that he might not be acting for much longer, hoping to push himself down further creative paths. His longtime script-in-progress The Kitchen is currently in the works with Netflix, and he’s also developing a Barney the Dinosaur film with Mattel (yes really). We had better enjoy him while we can, so here are 5 scenes from Kaluuya’s catalogue that illustrate why he’s one of Hollywood’s essential stars.

Fred Hampton Speaks Out – Judas and the Black Messiah

Shaka King’s biopic about the Black Panther chairman hangs in the balance of Kaluuya’s take on Hampton. To understand the 21-year-old’s impact, to see how an intersectional Rainbow Coalition could form in his wake and why the FBI would work so hard to infiltrate and eliminate this kid and his hold over his chapter of the party, the audience has to believe in the power of Hampton’s words.

It’s a challenge Kaluuya met with award-winning effect. Watch his Hampton delivering speeches to rapt crowds – Kaluuya’s thunderous physicality and booming voice are even more important than the things he actually says – it has to be physical, tactile, because the speech resonates so deeply. What’s key isn’t that Hampton says “I am a revolutionary”, but that he gets the audience to repeat it back to themselves. Kaluuya whips himself up into a frenzy, he isn’t the man in this moment, he’s the message, because “you can murder a revolutionary, but you can’t murder revolution”. – Luke

The Words of Posh Kenneth– Skins

Daniel Kaluuya is among several of Britain’s best young talents who got their start on Skins, the TV show about teenagers which started airing in 2007 and caused a moral panic. Kaluuya, 18 at the time, played Posh Kenneth, a secondary character whose running gag plays with the idea of code switching. Code switching means the ways a member of a marginalised group adapts their language, behaviour, appearance and more to fit into the dominant culture. Throughout the series, we see Kenneth excitedly speak in BBE (British Black English, UK equivalent of AAVE) before calmly rephrasing so his friends can better understand. The best moment from Kenneth is definitely his rap in season 2, which Kaluuya co-wrote.

What’s most striking about Kaluuya’s time on Skins are his contributions in the writer’s room. He was the main writer on 2 standout episodes from the series – Jal and Thomas. You can see echoes of the contemplative, stoic, charismatic Kaluuya would go on to develop in how Thomas was written. – Jess

Jatemme “doesn’t care what people think” says Kaluuya of his character in Steve McQueen’s crime thriller. That’s putting it mildly, the enforcer and brother of crook/politician Jamal Manning goes through Chicago with a ruthless abandon. It’s like he’s happy to take that dirty work off his brother’s plate, and the cleaner the hands of Brian Tyree Henry’s Jamal have to be, the dirtier his get. Compare their body language and see how casually being an intimidating criminal comes to Jatemme.

In a plot as taut as Widows heist, a cannon as loose as this is a constant threat, and we see just how seriously to take Jatemme when he’s investigating money stolen from Jamal. He’s presented with two nobodies with info, who were rapping away when his boys picked them up. He demands they start their rap for them again. Kaluuya is only 5’7, but he cuts an intimidating figure, invading their personal space as they rap and beat box for him; eyes wide and clear about who’s in control. They start feeling themselves as he nods and hums along, the camera in orbit around Kaluuya’s charisma as they go through their bars – until he shoots the one rapping mid-stream. He orders the other to run away and shoots him dead too while his back is turned. They’re not on his radar so he wipes them out, not a care in the world.

That rotating camera falls in step behind Kaluuya. So commanding is his presence, he almost breaks the fourth wall as he turns to face it, shrugging off two murders, he could be talking to his crew, the camera, us or nobody, he doesn’t care any which way. A guy like Jat can only add to our tension because he’s completely immune to it. “Dickheads”, he flatly intones. – Luke

Chris Washington Sinks Under – Get Out

Get Out is arguably Kaluuya’s most widely known piece of work. As we can all recall, Jordan Peele’s directorial film debut works as a psychological horror but also as an entertainingly witty satire. However, it should never be overlooked that Kaluuya gives an understated and devastating performance in Get Out. Kaluuya plays Chris Washington, who is anxiously meeting his white girlfriend’s parents for the first time in bougee Upstate New York. From the outset, Chris shows a demeanour that somehow seems to pre-empt the series of unfortunate that will inevitably play out during his ill-fated visit to white suburbia. When he arrives in Rose’s parents’ house, it’s even more obnoxious than he could have anticipated. When things get progressively more sinister, Chris not only finds himself in a struggle to Get Out alive but is also forced to confront the legacy of his deeply rooted childhood trauma.

Undeniably the hardest hitting scene here is when Chris finds himself under the very literal hypnotic spell of his girlfriend’s mother Missy Armitage. Missy (played brilliantly by Catherine Keener) sits Chris down and begins to seep her way into his subconsciousness and renders him powerless in the ‘Sunken Place.’ Here, Chris is forced to relive a traumatic childhood event. This scene is executed perfectly. The blue shades in the cinematography, the ingratiating sound design, it all fits together.

The cherry on top, however, is Kaluuya’s subtlety. He delivers an instructive example of how saying very little can convey so much. Kaluuya is practically immobilised and barely utters a word in this chilling scene. But he is visibly terrified. The kind of terror that brings someone back decades to when they were a child and strips away all of the emotional armour that they’ve worked so hard to build up throughout the years. There are aspects of this scene that are very much reflected in Jordan Peele’s more recent outing Nope. Specifically, the use of childhood trauma as a motif for the story and Kaluuya’s understated performance. His performance in Get Out is superb. – Ethan

*spoilers ahead for Nope if you haven’t seen it yet, which you should*

OJ Haywood has seen enough as Nope approaches its climax. The stoic bordering on awkward ranch owner has been living under the shadow of living UFO ‘Jean Jacket’, as the unidentified sky beast has killed his father, devoured his livelihood, and eluded the attempts of OJ and sister Em to capture evidence of its existence, and the fame, fortune and glory that comes with that spectacle.

The Haywood Ranch is literally on the fringes of Hollywood, OJ venturing out to sell off horses to get by, disregarded and disrespected when he does make it onto a set for some commercial. Slouched, eyes cast downwards, and mumble mouthed, he’s not a natural fit for centre stage. But it put him in the exact right place at the right time to see Jean Jacket for what it is – a wild animal, ‘with spirit’. “Anything with a spirit can get broke” OJ says, and he comes up with a carefully considered plan with Em, techie Angel and renowned cinematographer Antlers Holst, to track, lure out and frame Jean Jacket for the perfect shot. OJ rides into the spotlight, galloping into harm’s way on horseback, calm and collectedly rustling Jean Jacket, every bit the heroic cowboy that’s stitched into Hollywood folklore, all the more evidenced by Michael Abels epic score and the sweeping wide IMAX camera of Hoyte van Hoytema.

But that isn’t the moment. ‘Jean Jacket’ is named after one horse OJ and the Haywood’s dad couldn’t break in, one that was supposed to be for Em, unseen and overlooked by Otis Sr. We see the setup in flashback, young Em watching on while the boys do the work, little OJ giving a wry ‘I see you’ finger gesture back at his sister. Back in the present, Em and OJ have quietly repaired their relationship amidst the chaos. While everyone has their eyes on the bigger picture, they have each other’s backs no matter what, believing each other, supporting each other, saving each other. They’ve succumbed to the system and the spectacle to snap Jean Jacket, endangering everything in the process.

As it all goes to hell and Jean Jacket bears down on Em, OJ – who knows it only preys on something that’s looking directly at it – diverts the beast’s attention, staring it and his sister dead on. Now they seem doomed and endangered, Em pleads with OJ to leave. But that spirit isn’t broken yet, and there’s work still for them to do, together. Throughout Kaluuya retains the same guarded stance despite everything his character goes through. It adds all the more to the moment when he looks past Jean Jacket, looks at Em, and makes that same gesture of sibling solidarity. No big words from Kaluuya here, no showreel shouting. Just two fingers pointed at his bold eyes and back out – I see you. – Luke

Where to watch Judas and the Black Messiah