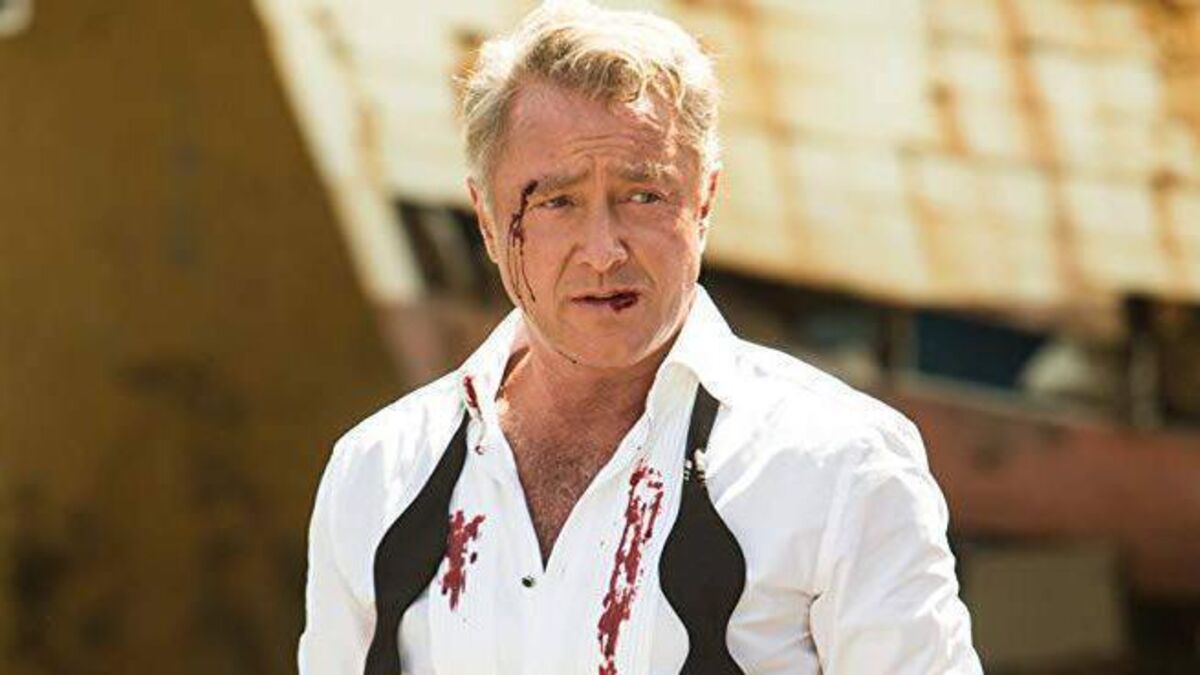 It was over four years ago now that word first went around about Blackbird, the spy thriller written by, directed by and starring Michael Flatley. Though he had no prior experience in filmmaking before this first feature, the Riverdance star insisted that it was a story he’d wanted to tell since he was 7 years old, though presumably as a child he had imagined himself somewhere between 7 and his 60s when picturing ‘Victor Blackley’, badass secret agent extraordinaire. Atypically for the Lord of the Dance, he got cold feet, and a film slated for release in Autumn 2018 fell off the radar entirely. Until now.

Safely buffered from the personal expense of the film by a new pack of producers and emboldened by winning an Award for Outstanding Achievement in the Field of Excellence at the Monaco Streaming Film Festival, Flatley has emerged from the parapet and into the press tour for Blackbird, drawn out by the only reason he made the film in the first place – to receive undulated praise. Press photographers and morning show presenters fawn, distributors and exhibitors just about hide the smirk behind their marketing, and Michael goes on, fuelled by the same unwavering self-confidence that leads a man to success and then later to self-insert James Bond x Casablanca fan fiction. Tonight, Flatley walks the red carpet, tomorrow he will be shown only the most carefully worded reviews, and when wider audiences are shown the film finally when it is released on Friday, they will see a boilerplate spy movie, painstakingly edited down to the least embarrassing version of itself possible with the footage available.

Which is not, thankfully, to say that Blackbird isn’t embarrassing. You worry early on that it is just going to be dully competent, that they’ve sanded off just enough edges to get out with reputations intact, and then Flatley starts talking, and the other characters start talking about him. It’s less like they made a movie to please a spoiled celebrity and more like they made a movie to please a spoiled toddler, who keeps threatening to throw a wobbler, and to keep him from crying all the adults have to strain extra hard to keep the energy up and be cheerful and insist that actually everything is going fine and he’s still having his special day. No matter how carefully managed this PR exercise is, beneath it is still pure, unchecked hubris, and hubris is edit-proof.

After a bleak personal tragedy, the world’s greatest secret agent Victor Blackley (Codename: Blackbird) retires from the spy game to run a hotel in Barbados. His staff are mostly former colleagues from the spy game for some reason, including loyal second in command Ian Beattie – the one exception is the beautiful 20-something lounge singer who needs to fuck Victor more than she needs air to breath. He’s too noble for that though, one of those great have-your-cake traits of self-satisfaction. Good Guy Victor is thrust back into the tense but vague world of international espionage when arms-dealer Eric Roberts happens to book a stay in Victor’s Blue Moon Hotel to conduct a deal with a sinister cabal of war criminals. The crook has brought along his fiancée Vivian, ALSO a former spy, and an old flame of Victor’s. The Blackbird is ‘quite the ladies’ man’ you see, one of the many, many compliments the character receives from everyone around him. Will Victor get back into the game, stop the baddies evil plan, make out with the sexy blonde, get to stay up late, have ice cream for dinner, etc, etc?

All of Victor’s employees love him like family. Beautiful women throw themselves at him, he beats up henchmen twice his size, international powerbrokers insist on his importance despite his age and his retreat into the hospitality business. The character is a power fantasy to an absurdly childish degree, a superhero to whom a globe-threatening super virus and the rekindled flame of an engaged woman’s love never rise beyond the tension of a frustrating day at work, interruptions to the Victor Blackley routine of walking around his hotel bar being smiled at by delighted patrons. The idea that people hate it when the owner of a place comes to schmooze with them is lost on Flatley, who can’t write any real conflict into his Casino RoyAldi. Even his character’s tortured backstory is something that everyone around him insists had to be done and that he must forgive himself for. Unfortunately for Flatley, he looks too busy straining to remember his own lines to actually enjoy his overpriced playdate.

The Lord of the Dance is every bit the awful actor you might have imagined and more. His brow permanently furrowed, his body language unshiftingly awkward, he carries himself like an uncle at a wedding just sober enough to realise how bad his dancing is, but too drunk to stop. Everyone else seems dumbed down to his level, Darkplace levels of wrestling with lines, with only Eric Roberts, an experienced hand at awful movies that pay well, comfortable in his skin on screen. The performances are made to look worse too with drab staging. Flatley clings to shot-reverse-shot conversations like they’re bowling alley bumpers, and seemingly didn’t shoot a second of establishing footage that he didn’t want to keep, resulting in a plodding pace.

Every time the slow story and setup threatens to lull you to sleep though, someone reels off another dazzlingly bad bit of dialogue. The pace is also thrown off by the obviously heavy editing – ADR lines a plenty, scenes that go nowhere and a spectacularly anticlimactic *scene missing* climax all suggest someone snuck in, possibly while Flatley was asleep, and took out as many parts damaging to the Lord of the Dance brand as they could. He gets to laze around the Caribbean in Sean Connery cosplay, they get paid, we laugh at him saying “shall we dance?” to henchmen. Seemingly everybody wins.

Was it all worth it? Blackbird is pretty much to a letter what audiences will have imagined when they first heard about it; a pathetically hubristic b-movie by a non-actor on an ego trip. It delivers on its promise of cinematic schadenfreude, with some of the worst dialogue you’ll hear at the cinema this year, soap opera stiff performances and banal plotting. To watch Blackbird is to play a shell game of cringe, a con job where the cards keep moving while the audience tries to figure out what Michael Flatley is worst at: writing, directing, or acting. Like any shell game there’s no answer and you lose your money, but this is mutualism at the movies; a symbiotic relationship where Flatley gets his ego stroked and the audience get their funny bone tickled.

The great ‘so bad it’s good’ movies have heart either on screen or in the crowd. There are the barrier-breaking, show-must-go-on efforts that endear audiences, surprise them with ingenuity, or spark empathy with their earnestness. Then there are the ones that bring their audiences together like a broken-down bus, undeniably shit, but you have to laugh, and the effort at least shakes us into a brief, beautiful community. The gravity of Flatley’s ego is too powerful for the former, but those that can safely orbit around it can point and laugh together at the planet-sized, pathetic play at being badass in this entertainingly awful effort. When we’re more conscious than ever of the divide the rich enforce on the rest, it’s almost endearing to see someone waste his money on something only self-indulgent and tacky, instead of spending it actively making our lives worse. Even hubris can have a beauty to it, stripping an unctuous racist millionaire into something almost vulnerable – a sad man, too rich to enjoy himself, too awful to be liked. It’s an all-too-brief moment, but to quote one of the movies Flatley wishes that he made, we’ll always have Paris.

When the people cry out that the emperor has no clothes, he only shivers briefly before declaring that the procession must go on, marching prouder than ever, luxuriated in the lie. He remains the emperor, but the people would do well to remember the joke that exposed itself.