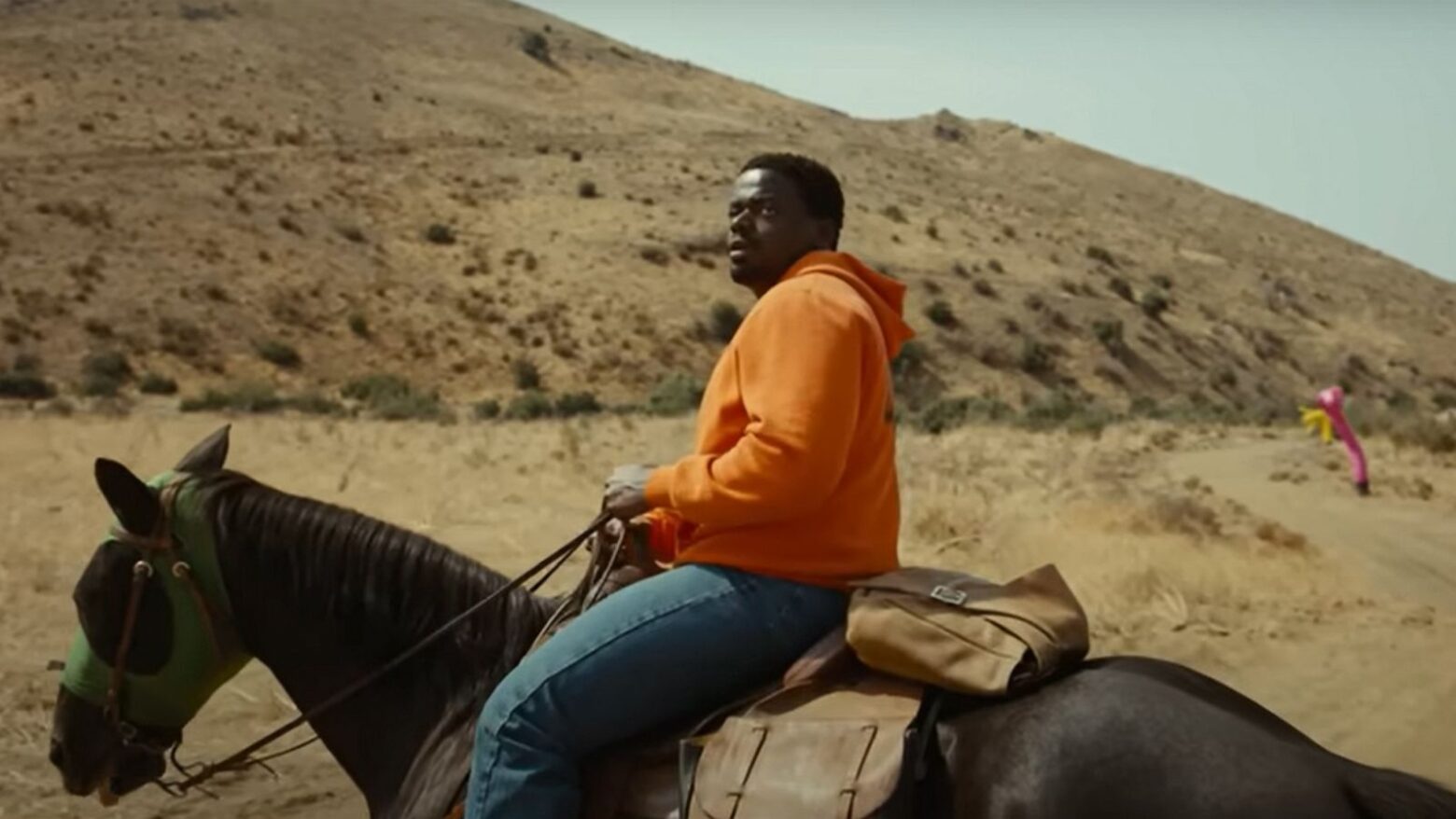 From the jump, Nope is very explicitly interrogating the concept of spectacle, who and what a spectacle is and who benefits from them. The film opens with a biblical quote “And I will cast abominable filth upon thee, and make thee vile, and will set thee as a spectacle”. Via a fantastic sales pitch expertly delivered by Keke Palmer, we hear about how the first ever motion picture depicts a Black jockey riding a horse. History remembers the name of the director, but not the jockey. We’re encouraged from this point onwards to question the dynamics behind spectacle.

What’s most striking about Nope is how it frames its characters attempts to own their spectacle lest anyone else beat them to it and profit from their pain first. The film follows siblings OJ and Emerald (Daniel Kaluuya and Keke Palmer) as they try to navigate the sudden loss of their father, managing the family legacy Haywood’s Hollywood Horses ranch, and surviving a siege from an alien. It’s a lot! When the pair realise that something extra-terrestrial is going on their first instinct is to set up cameras (with the help of Angel Torres played by Brandon Perea) hoping to turn a profit and get their “Oprah moment”. Later on in the film we witness a motorcycle crash and the victim begs for a photo to be taken before he receives any help, to get something out of this horrific incident.

The true spectacle at Nope’s heart has nothing to do with aliens. At the film’s open, audiences are teased with a glimpse at a chimpanzee on the set of Gordy’s Home, a fictional sitcom, covered in blood. As the film went on, I began to wonder would we actually get much insight into what happened. Part of me wishes we didn’t. It’s slowly revealed that one day on the Gordy’s Home set, seemingly without warning the chimpanzee snaps and attacks its human co-stars, as witnessed by Steven Yeun’s character Ricky during the height of his child stardom. The results are gruesome. Although Peele handles this scene with restraint, we see everything that happens indirectly and from a distant perspective, I’ve been haunted by the visuals and sounds since leaving the theatre.

Now an adult, Ricky has put together an exhibit of souvenirs from the Gordy incident for which he charges rich tourists an entry fee. We hear him recount an SNL sketch making light of the animal attack, with great acting from Yeun as he describes how hilarious this depiction of his childhood trauma was. If SNL and Mad Magazine can benefit from the attack, why shouldn’t Ricky? Where someone stands to profit from tragedy, shouldn’t it be the victims? Peele courts our discomfort during this scene, forcing us to interrogate our feelings because in a capitalist context, we know all too well that expecting that no one exploits or profits from tragic situations is a tall order. Later on in in the film Ricky’s old co-star Mary Jo Elliott (Sophia Coto) returns with scars evocative of chimp-attack survivor Charla Nash who famously appeared on The Oprah Winfrey Show. Elliott’s scars are draped with a veil, only briefly revealed to the audience as wind gently laps at her face, Peele deserves credit for this respectful approach.

Nope delivers everything a summer blockbuster should, while drawing a poignant and memorable commentary around the underbelly of spectacle which Hollywood and the wider entertainment industry often struggles to reckon with. The film ends with the image of a blurred Black jockey on a horse, denying the audience their spectacle at last.