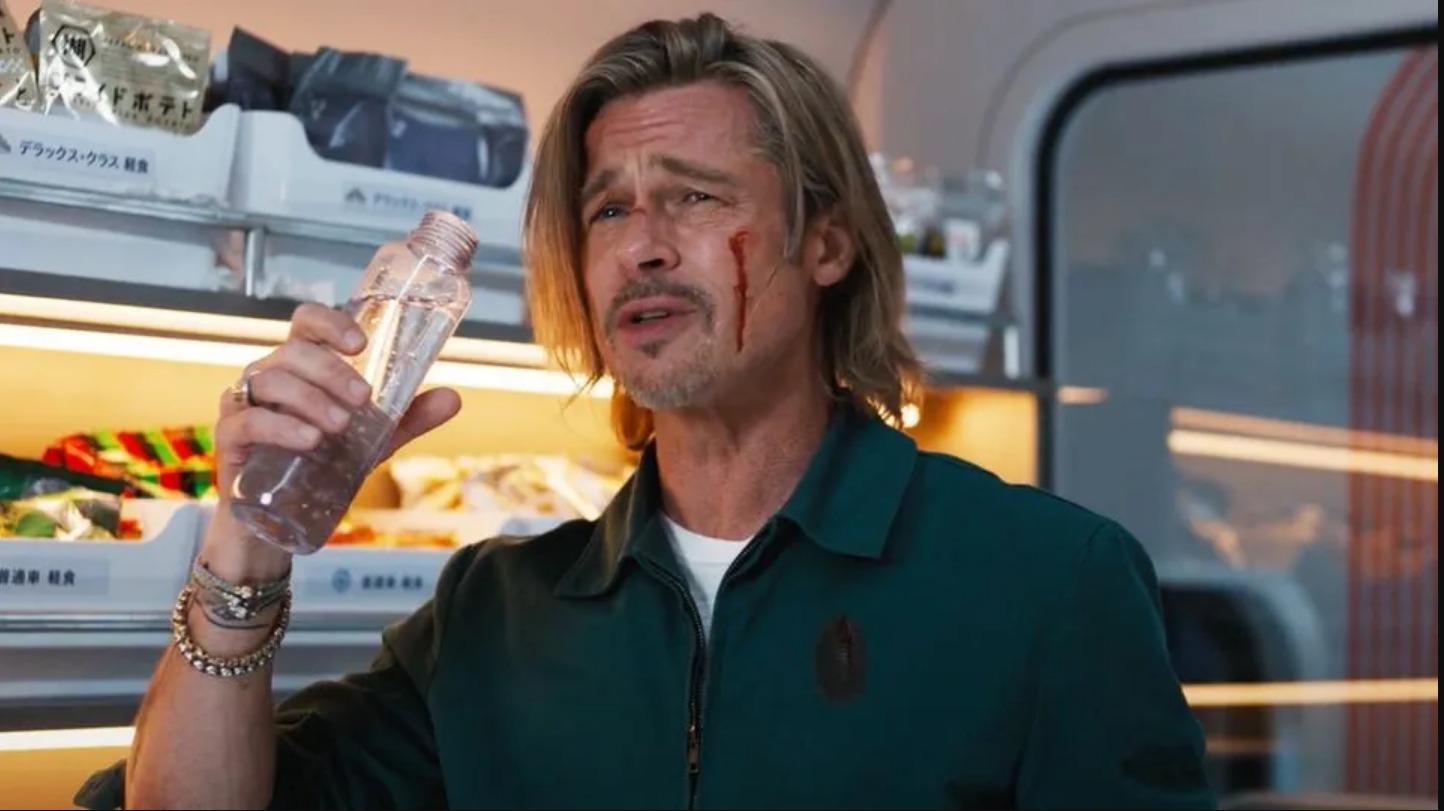 We must stop wacky neon action movies until we can figure out what’s going on. John Wick may have hundreds of broken and brutalised bodies left in his wake, but the greatest crime he and his film series have to answer for is enabling and emboldening the quirky assassin subgenre – Atomic Blonde, Hotel Artemis, Nobody, Snake Eyes, Kate. The list goes on, each more unjustly self-satisfied and needlessly convoluted than the last, and now Bullet Train, the latest Killers Say the Darndest Things compilation from stunt guru David Leitch, pulls into the station. Too late, too long and suffocating, it’s a train that could have been sent by Irish Rail itself.

There are a few troublesome symptoms of the Wacky Neon Action Movie. An over-reliance on fluorescent lighting being one of the most common, a cool visual shorthand which does not automatically equate to actually being well-lit. In Bullet Train, it’s garish and overly bright, while it might give a gritty, neo-noir quality to a genuine East Asian city street, it only accentuates the artificiality of the Assassin Hotel, Assassin Train, Assassin Weekend Garage et al. Speaking of East Asia, an ignorant appreciation for Asian culture and action cinema is another bad sign. At its best, it involves reverent directors giving a spotlight to the movies they love and the veteran actors that starred in them. At its worst, it’s old-hat stereotypes and a counter-productive reliance on ‘Japan is Weird’ humour. One of Bullet Train’s many dead-end running gags involves an ‘anime’ with all the attention to detail and incisiveness of South Park slagging Pokémon 25 years ago. It becomes hard to take these movies seriously as love letters to international cinema when they have all the off-putting, over-eager ignorance of that lad you hated talking to back in uni showing you Nic Cage in a Japanese shampoo advert. Nothing you haven’t seen before presented by someone trying too hard.

Offbeat Assassins are of course, a given in these movies. Which is odd to be honest, since the John Wick series is a silly world of offbeat assassins played as straight as an arrow. In these offshoots, and Bullet Train in particular, every awful Quipping Tarantinely script left in screenwriters drawers are dug out for groan-worthy running jokes and casual danger dialogue, which results in a story packed with characters you want to die immediately just so they’ll be quiet.

Needlessly labyrinthian plots are also a feature. Again, part of John Wick’s success is in the simplicity of the premise – ‘they killed his dog and he wants revenge’ is so straightforward and understandable that it’s burned into the minds of people who have never even seen the movies. His past and the world around him is richly alluded to but never, for one second, actually important, and the characters’ goals are clear and direct. Constant flashbacks, character introductions, deals, betrayals and twists push movies like Bullet Train further away from what audiences actually want out of them – long action scenes where dudes get wrecked.

The most important thing to know about Bullet Train before going in is that it isn’t actually an action movie on a train, not really. It’s aiming more for an intriguing character study with occasional outbreaks of action, a fun time hanging out with cool players like Ladybug (Brad Pitt) the chill operative with bad look, Lemon and Tangerine (Brian Tyree Henry and Aaron Taylor-Johnson), twins who bicker and discuss Thomas the Tank Engine and Prince (Joey King), the clever kid with a plan who’s oh-so-above it all. We’re supposed to root for and against these characters all while taking in the fight scenes and try to get to the bottom of the mystery of the ‘White Death’ and the bigger plot Ladybug lands himself in when sent to retrieve a briefcase from Lemon and Tangerine aboard a Japanese bullet train. Unfortunately every character in the film is insufferable so it doesn’t come off. The sinking realisation that Leitch is trying to do Tarantino rather than repeat himself is the hardest blow that Bullet Train lands in its exhausting two hour journey.

Pitt at the centre of this is intended to be an affable figure, our gateway into this world of violence. Though his laid-back persona seems like a good fit on the face of it for Ladybug, the star power that’s supposed to carry this movie actually draws away from the character. A goof who half remembers affirmations from his therapist and can’t catch a break, handsome, happy, half-assed Pitt doesn’t work for the finer details. It’s too hard to buy him as hapless. A poor fit for underdog slapstick; he carries himself too well, he’s in just too good shape and he’s too removed from everything else going on. Ladybug is supposed to be a bundle of nerves under his calm demeanour, but the way he constantly tries to remove himself from proceedings here comes across less like Jackie Chan-style “I don’t want any trouble” anxiety and more like he just can’t be bothered to be there. There are so many moving pieces and supporting players but the lad caught in the middle can’t be arsed, so why should we?

The dead end storytelling could easily be excused if there was sufficient hard-hitting action, but Bullet Train is stingy with the fights. Leitch and his stunt team seem low on ideas, it’s the same Oldboy-Lite choreography you’ve seen many times now in American action, but with more cuts. What should be tight and tense feels repetitive and disengaging and the endless parade of character introductions in service of the flailing story mean that what should be the selling point is rushed through constantly.

Long and laboured, Bullet Train may work for you if you’re taken with its characters, who are straining hard to be lovable. Their banter as they bicker and argue about who killed was unfortunately excruciating though, without sufficiently imaginative and entertaining action to prop it up. It’s not unreasonable for Leitch to try to move beyond being ‘the stunt man director’ after his initial success, but Bullet Train is a railroaded attempt to try something that just isn’t working.