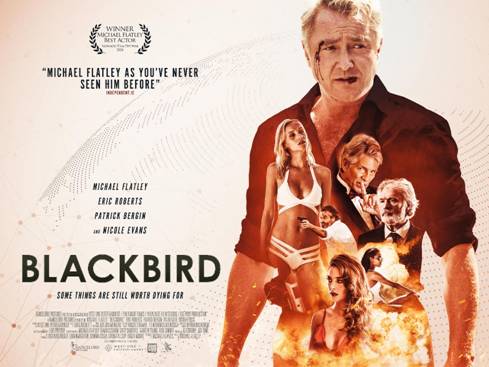 On a day that few in the Irish film scene ever believed would truly arrive, the official trailer and poster have been launched for the eagerly awaited spy-thriller Blackbird (for a given value of ‘eagerly’, ‘awaited’ and ‘spy-thriller’), which is set to be released in Irish cinemas on Friday 2nd September. Is it a day that should ever have come? Only time will tell.

Blackbird is the debut feature film from noted Donald Trump and Gemma O’Doherty supporter Michael Flatley (Lord of the Dance) in which he also stars as ‘Victor Blackley’, an ex-MI6 operative who is pulled back into the world he left when an agent connected to his past turns up to his place of business in Barbados. The film had its world premiere at the Monaco Film Festival where Flatley picked up the Best Actor award for his role. John Lennon’s son and Pelé also among the award winners of the prestigious festival in no way serving as a unctuous exercise for Monacan residents.

“I’m thrilled to be releasing Blackbird in cinemas across Ireland. The pandemic has brought about many unprecedented production delays, but we’re finally there. As well as filming on location in Barbados and the UK, we filmed many scenes in Ireland, so premiering here was always the first choice. There’s nothing more breath-taking than the Irish landscape.”

Special charity premiere screenings of the film will be announced closer to release date, at which some of Ireland’s richest and brightest will dance around the subject of whether they actually liked the movie or not with all the grace and reflexes of the Lord of the Dance himself.

“I was surrounded on set by great talent in Eric Roberts, Ian Beattie, Patrick Bergin, Nicole Evans and Mary Louise Kelly.  Sinéad O’Connor who recorded the most beautiful track for the outro, is truly one of Ireland’s treasures. Thanks to all the cast and crew for their commitment to the project, and to all of our partners bringing the film to cinema audiences. We’ve all put a lot into this project, and for me it’s very personal. This was a new endeavour for me professionally and something I’ve always wanted to do. My mother, when she was alive, always encouraged me to pursue this dream. Sadly, she will never get to see it, but I know she is watching over me. I’ve had great support from the industry, especially in Ireland, and winning Best Actor at the Monaco Film Festival was very rewarding.”

Unsurprisingly Michael does not mention that the movie was originally announced four years ago and has buried under radio silence for most of the time since, despite the best efforts of some of Ireland’s most intrepid, eager, and currently-blocked-by-Michael-Flatley-on-social-media journalists.

You can check out the trailer for Blackbird below.

Sorry, mistyped the URL there somehow. You can check out the trailer for Blackbird below.

“Who I am is none of your concern. And what I do is out of your control” was ironically Michael Flatley’s PR response re Blackbird for many years. “I have sinned and I will sin again” is also eerily apropos for a man currently in between telling far-right disgraced reporter Gemma O’Doherty to “keep up the good fight” while she was spreading racist bile online, and, releasing a movie that will probably not be very good.

Whether it was the honour of the Monaco Streaming Film Festival’s award, the need to softly rehabilitate his reputation (did he mention that he loves his mother, God rest her soul) or an improbable and possibly lost dump truck full of money, Flatley is finally ready and/or has caved in and will be unleashing his vision on us this autumn.

Having written about this subject for some time on various sites, and egged on the release of a movie I do not think will be good, written, directed by and starring a man I fundamentally do not respect, this writer, at this improbable hour, can only recall the words of the great Tom Lehrer:

“Life is like a sewer – what you get out of it depends on what you put into it.”

BLACKBIRD was produced by Glen Kirby and Jed Tune (Off Piste, The Pugilist) for Dancelord Pictures (yes really) and West One Entertainment and co-produced by Five Knight Films (Cardboard Gangsters) and Parachute Film Studios.