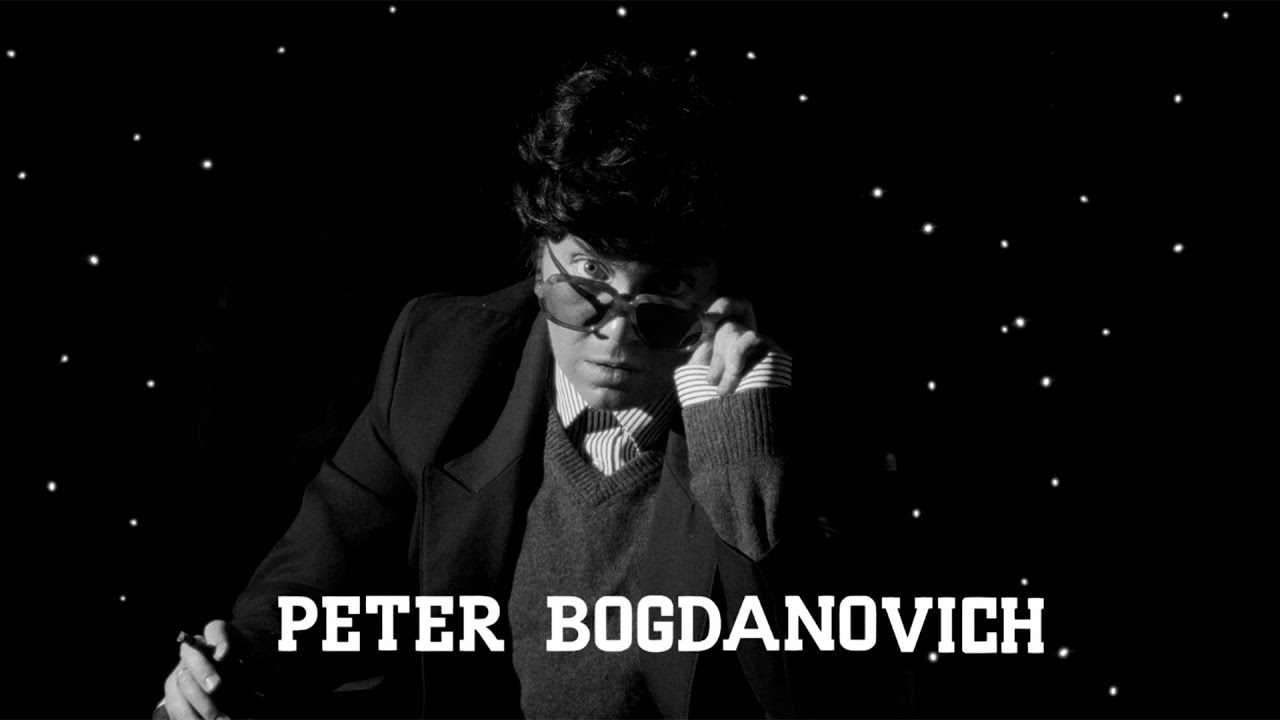 Ireland’s favourite global pop sensation CMAT has released the music video for Peter Bogdanovich, one of the tracks from her album If My Wife New I’d Be Dead.

Part personal lament, part auteur call-out post, the Peter Bogdanovich video is an offbeat exploration of one of the forefathers of the New Hollywood era, and a spotlight on the foremothers those men so often screw over, with appearances from ‘Peter’, Polly Platt and Cybill Shepard and the complex mixed emotions of their intertwined history.

“I wrote the song Peter Bogdanovich after listening to a podcast about the making of the film The Last Picture Show,” CMAT told DIY magazine.

“…I was taken by this particular story because I love his early films, and I loved finding out that his wife, Polly Platt, was the player who was actually responsible for what I love most about his films. I was really interested in everyone’s motivations – Peter for acting so selfishly, Cybill for throwing a bomb on a marriage and her work, and most of all Polly, for staying to work on the film even after the affair came out. I think it is a great allegory for the role that the construct of gender plays in all of our decisions, and how if gender and sexuality wasn’t really seen as such a rigid ‘thing’, our lives would be very different.

The ‘New Hollywood’ movement saw a new generation of filmmakers break through from the mid-60s through the early 80s, with directors like Bogdanovich, Brian De Palma, Dennis Hopper and more increasingly empowered to assert creative control, but also present new ideas on screen. Your mileage may vary for how much any one film is driven primarily by one creator, but these lads with their big brains and bigger egos were a force for some of the greatest American films ever made – helped along the way by many incredible talents less heralded by history. Platt was definitely one of those; the unsung Girl Friday behind the scenes at that time, developing productions, projects and talents while her husband Peter gained accolades and acclaim for directing era-defining features including Targets (co-written by Platt), What’s Up Doc? And The Last Picture Show. He begun his affair with then 21-year-old Cybill on that last one.

The intersection of sad pop, creative music videos, cinema history and memefication of guys who ran and left their wives for a young one is the quintessential area of Film In Dublin’s interests. The high-concept heartache leaves us eager for more, so to that end, here is a list of requests: 5 more New Hollywood directors that would potentially make suitable subjects for CMAT.

Speaking of serial cheating auteurs…you may be aware of Fosse’s philandering through the FX series Fosse/Verdon, which saw Sam Rockwell and Michelle Williams dramatize the rocky personal and professional relationship between the Cabaret director-choreographer and his actress/dancer wife Gwen Verdon.

“Bob grew up around strip clubs. Women were his hobby.” Verdon once reportedly said of her notoriously unfaithful husband. The catalyst for their separation occurred on the set of Cabaret, one of the iconic films of the 1970s currently making its way through big screens again for its 50th anniversary. Dissatisfied with the quality of the gorilla costume needed for the film’s ‘If You Could See Me Now’ number, Fosse had Verdon, working on the movie as a costume assistant, dispatched from Munich to New York to find a suitable replacement. According to Sam Wasson’s biography Fosse, Verdon returned, suit in hand – “[Verdon] walked in on him,” a friend said. “He was with a couple of German girls, and that was it for her. That was the last straw.” Fosse got her letter in Berlin, where Cabaret had moved for the end of location photography. It said separation.

Bitterly tragicomic camp through and through.

It does sometimes go the other way though. Sort of. Jerry Schatzberg isn’t as famous a name as some of his overgrown enfant terrible contemporaries, but he still combines both good work and goss.

The Bronx boy was a noted photographer before he sat in the director’s chair – he snapped Bob Dylan for the cover of Blonde on Blonde – and he had a tumultuous personal life of his own before going on to direct hipster Hollywood darlings like The Panic in Needle Park and Scarecrow, working with young Al Pacino and Gene Hackman.

Cool and confident Schatzberg was engaged to New Hollywood darling Faye Dunaway for two years while he was still finalising his divorce from first wife Corinne in 1968. Schatzberg and Faye never did get married though, with her leaving the photographer for Fellini favourite Marcello Mastroianni that same year. Descriptions of Schatzberg at the time, “a dark-haired man wearing a world-weary expression, a black sweater and a droopy Bolivian bandit’s moustache”, wouldn’t be out of place today in Wigwam of a Friday night.

For added Nashville flavour, one of Schatzberg’s better known films was Honeysuckle Rose, which started Willie Nelson as a older country singer who – stop me if you’ve heard this one before – runs away and leaves his wife for a young one.

Not every boyfriend is a bottler though. When Mel Brooks met Anne Bancroft backstage at rehearsals for the Perry Cuomo show, it was love at first sight. When she finished singing, Brooks, tagging along with a buddy, leapt up, applauded and yelled “Anne Bancroft! I love you!”
Working on television spy show Get Smart, Brooks’ biggest break at that point, was a gig he pursued to help afford marriage and keep the glamorous Bancroft in the style she was accustomed to. A proto-wife guy was born, and Mel continued to cite Anne as a ‘guiding force’ creatively for some of his biggest projects like The Producers and Young Frankenstein. From day one until her death, Mel was smitten, the kind of happy ending every pop star aspires to invoke. Anne already has her song, why not Mel?

Also, as a New York Jewish comedian, Brooks, like Irish Diet Coke-swigging hun CMAT, is an improbable cowboy icon. But his comedy classic and cultural landmark Blazing Saddles is both a perfect satire and a great example of the genre its spoofing – in style and sensibility it has all the real DNA of the best Westerns. Madeline Kahn in the film is like an early version of the Meath musician’s persona and all…

The real ‘real ones know’ of the New Hollywood scene, May was a comedy legend back when What’s Up Doc? was still a twinkle in Peter Bogdanovich’s wandering eye. Her double act routine with Mike Nichols was famously beloved through the 50s; smart and sassy sketches that paved the way for modern comedy and improv. When they parted ways, both eventually found their quick wit and fresh perspectives had a home separately on the big screen.

Nichols directed The Graduate and many more hits, but May may have the better deep cuts. Her black romantic comedies like A New Leaf and The Heartbreak Kid are timeless and hilarious, finding the fresh, fun and new in classic standards, screwball comedy bulldozing through 70s relationship stories, not unlike CMAT serving honkytonk within modern pop. She later directed the infamous Ishtar, a troubled production that some marked as endemic of that era of excess – May herself said “If all of the people who hate Ishtar had seen it, I would be a rich woman today.”

Now 90, May did team up with Nichols again to work on The Birdcage in 1996, and God willing will get one more shot to mark her legacy for the road – she’s set to direct Dakota Johnson in her first narrative feature in decades in a project called Crackpot. Give us screwball dame gone goblin mode for the 21st century Elaine.

Spielbergo is to directors as CMAT is to 2020s Irish musicians – they’re the one my dad has heard of.

The blockbuster guru is the biggest success story of the ‘movie brats’; or at least the one with the greatest longevity. While the universal appeal of his work and his calm demeanour have given him an elevated image, Hollywood’s corny dad, Steven is still human and can find himself scarlet and in scandal just like anyone else.

In the late 70s, Spielberg was in a relationship with actress Amy Irving, star of Brian DePalma flicks like Carrie and The Fury (she later starred in Honeysuckle Rose and dated Woody Nelson – Hollywood is just like Dublin, a small town). They split, with Amy missing out on the role of Marion in Raiders of the Lost Ark in the process, before getting back together and marrying in the 80s. Amy and Steven wrote their prenup agreement on the back of a napkin. When they amicably split in 1989, the judge ruled that the napkin was not legally binding. (Also there were no proper witnesses but the napkin probably didn’t help). Irving received an estimated $100 million in what remains one of the most expensive divorces in history. Good for her! Steven bounced back pretty well himself all things considered, but he’ll always have the inner cringe, and possibly still has the napkin.

Mistakes, heartbreaks and unpacking iconography – CMAT’s music transitions smoothly on Spotify into an episode of You Must Remember This, and there’s plenty more directors out there to potentially find their way into her lyrics.