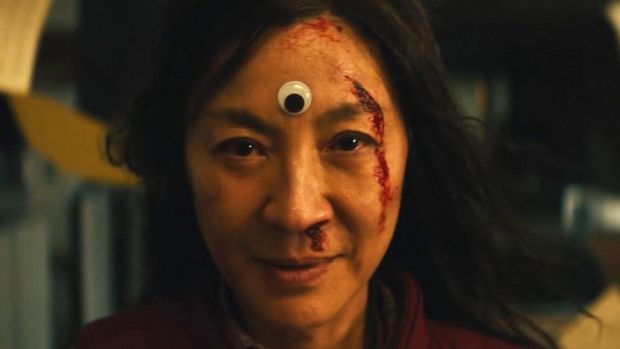 Who knows what possibilities the multiverse holds? Expand the imagination beyond fan-casting cameos for a moment, and consider the many paths not taken, the decisions that you’ve agonised over, the hindsight that snaps suddenly into focus, every failure, success and close-shave each way you’ve ever had. You can say that the multiverse is having its moment in the pop culture spotlight, but beyond the modern blockbuster isn’t it what we contemplate with every passing moment? Spend too long thinking about your own divergent paths and you’ll get overwhelmed quickly, lurching violently from the exciting to the absurd to the upsetting. It’s the multiverse of mental overload, and it’s making sense of this many-muddled madness that forms the story explored in Everything, Everywhere, All at Once.

The film centres on Evelyn, a worn out and overwhelmed owner of the laundromat under her cramped home. Since moving from China to the US with her goofy husband Waymond, a lot of life has interrupted Evelyn’s many other plans – her many fleeting ambitions being claimed as business expenses now causing awkwardness at the tax office. Evelyn and Waymond are under fire from their IRS inspector Deirdre, there are wide cracks in their marriage, Evelyn’s disapproving father has arrived from China and needs a lot of looking after, and Evelyn’s inability to embrace her daughter Joy and Joy’s relationship with her girlfriend Becky might splinter things between them forever.

It all feels on top of Evelyn, and we see it through cluttered frames and fast-paced edits in the opening as we’re introduced to all our characters. Waymond seems meek, Deirdre bitchy, Joy distant, and if they’re that way in the moment they must be locked that way in aeternum, right? And if Evelyn’s impulsiveness, disorganisation, frustration and lack of focus have had negative consequences, then they can only have had negative consequences, which can’t be changed. They’re very relatable feelings the fed-up Evelyn is having, and they have an exceptional actress to get them across in Michelle Yeoh.

Yeoh has had some of the best range in international cinema for decades, from the slick action mastery of the titular madam of Yes Madam, to the complex matriarchal machinations in Crazy Rich Asians. She plays Evelyn as earnest but awkward, reluctant to engage with her family, too weighed down by every argument and disappointment. With her terse line delivery and stiff, quick movements, Yeoh really sells Evelyn as a woman on the brink. It does not help when an alternate version of her husband suddenly appears and tells her than an unstoppable evil is spreading across the ’verse and only this version of Evelyn can stand in the way of the complete destruction of all reality. Evelyn is very busy that day, but as her new Alpha Waymond shows her how to unlock more of her infinite potential, and the more myriad possibilities she sees, the more exhilarated Evelyn becomes. And existential. And exhausted. It’s a lot.

It’s some of the best work of Yeoh’s career, capably carrying a film that veers tonally at a rapid pace, from family drama to sci-fi to martial arts movie, Loony Tunes and more. The mood and energy of the movie can jump around wildly, because it’s always firmly held as Evelyn’s story, and Yeoh maintains a consistent emotional core. She really can do it all. Her steady performance enables fine acting around her in the supporting roles. Long shut out by Hollywood, Ke Huy Quen knocks it out of the park as the various Waymond’s; affable and altruistic. Stephanie Hsu should get plenty of opportunities off the back of her role as Joy, a part that grows in depth and complexity as the film goes on, with Hsu getting better and better. All-time Hollywood great James Hong, still lively on screen as ever at 93, looms large over the family as he his father figure arrives in America, a prickly pressure point for the Wang family. Where the complex plot and zany antics could lose the audience, the exceptional performances hold the core, as crazy as everything gets, the directors never treat their players with anything less than full emotional sincerity.

In their first feature, Swiss Army Man, Kwan and Scheinert, used an absurd and unserious idea to sneak in a sincere and open look at loneliness, and that trick is repeated here with even more ambition. The bigger this film goes, the higher the risk of stretching the premise to breaking point, but it’s a risk the directors take on armed with busy action choreography, intimate character moments, and butt plugs. It’s very common for creators to follow up a successful first feature with a messy mix of all their biggest ideas – think of Jordan Peele and Us – and it doesn’t always work, a film can become unfocused with goals and reference points that are too broad. Everything, Everywhere All at Once manages to balance the tastes of influences as different as In the Mood for Love and Freddy Got Fingered. It’s kind of a miracle in that sense, but it’s appropriate for a story about opening up possibilities. The sillier it gets, the harder the audience is laughing, the more weird and wild information they have to take on board, the lower their guard gets. When the director’s hit on the emotional beats then, it hits hard.

A chartered path through indecision, regret and hesitation, Everything, Everywhere All at Once is a feast for the eyes, and a series of thrills that build up to genuine catharsis. When we look at all the options laid out in front of us, it can be very hard not to see our own path as a failure, and a finished one at that, but that isn’t true at all. With our eyes and hearts open, we can allow ourselves to have a different outlook on all the options. We can see our past and future in new lights. We can access parts of ourselves we felt sure that we’d lost. The scattered becomes liberating, and all at once, anything.

Where to watch Swiss Army Man