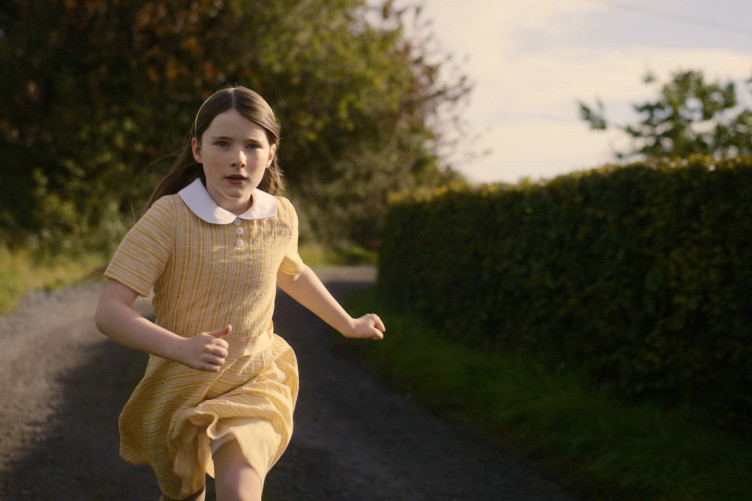 In an Irish film industry that is marching ever further forwards it can be easy to scoff at stories that look back to the past. Our touchy subject tetchiness to the ‘diddly idle’ at times causes a wariness in exploring our history on screen, an aversion each way both to the overly idyllic, feature length fáilte to tourists, and to the extended wallow in the ashes of misery. How delightful then it is to see a film thread that needle perfectly. Exploring grief, shame and loneliness through the innocent, but observant eyes of a child, Colm Bairéad’s An Cailín Ciúin is a delicate, deliberate and deserving Irish story, opening the past up through the keen lens of modern Irish filmmaking.

The quiet girl in question is Cáit, a shy, wide-eyed daughter on a struggling farm in 80s rural Ireland. From the get-go, Kate McCullough’s gorgeous cinematography plants us behind Cáit’s eyes; we’re introduced to her hidden in the hay on the farm, a bright and wide image, and a direct contract to the dark and tight space we see whenever Cáit is in her family home, in a state of disrepair. There’s no warmth on the screen there, the louder for us to hear the scorn in her sister’s voices, see the exhaustion in her mother’s gait, feel the indifference in her father’s care. With the family waiting on the birth of their fifth child, they can’t look after Cáit even to the extent they currently are, so she’s packed off for the summer to distant relatives she’s never met, her mother’s older cousin Eibhlín and her husband Seán.

Such is her dad’s rush to dump her in Dungarvan with Eibhlín and Seán as quickly as possible, and him indifferent, hungover and resentful of their larger, more prosperous farm, that Cáit is left without even her clothes for the entire summer. One of many little touches in young Catherine Clinch’s great performance in the lead role is that wrinkled expression of hurt that only children get, the lack of surprise paired with the hurt that they can be so let down again. Her spirit is crushed by the neglect, and the film is a long, gently placed process in drawing her out, nursing her back to mental health by her summer guardians, with her doing the same to them in kind. The film fosters a loving environment for all concerned, with the personal secrets of the older couple, and the knowledge that Cáit will inevitably be going home sooner rather than later, looming like clouds in the background.

The simple storytelling and slow pace allow ample time for the film to breath, for the character’s relationships to develop and for the audience to fill in the gaps in it’s lead character’s perspective. An Cailín Ciúin is comparable to the excellent Petit Maman in it’s ability to convey a child’s understanding of very adult emotions and social dynamics, and key to that is in showing that it’s not that they can’t make sense of these things, just that it might take time and a different way of looking. Cáit’s relationship with the kind-hearted Eibhlín, played with great tenderness by Carrie Crowley, is instantly heartwarming. Winning over the taciturn farmer husband, stop me if you’ve hear that one before, is a harder task, but Cáit’s quiet dedication and inherent sweetness make quick work of Seán and their burgeoning affection is slow-cooking magic. Like the film’s focus on the steady, repetitive farm life and Eibhlín’s busy baking, patience is virtuous and immersive here. Quickly like Cáit, you don’t want this summer to end.

Adapted from the short story ‘Foster’ by Claire Keegan, Bairéad focuses on the small moments here, the things that will make most sense to the 9 year old at the centre; images, sounds, smiles and movements. When Eibhlín goes quiet and walks away from a table, Cáit will know she’s upset, even if she doesn’t know why. While there may be a leaning on montage that might not be seen if this wasn’t the director’s debut narrative feature, the economic and immersive storytelling, warm and genuine, vindicates the film’s reputation as one of the most promising Irish films of recent years. It’s matter of fact use of the native language is both practical and lyrical, grounding it in the setting and speaking to Cáit’s underserved self. As she blossoms under better care, deeper meanings for Ireland or otherwise can be drawn, but the well here is beautiful and refreshing on its own anyway. Understated and emotional, An Cailín Ciúin deserves the noise that it’s been making in recent months.