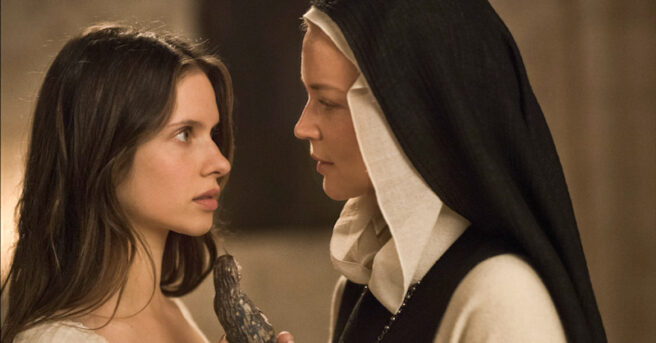 “Lesbian nuns!” “A wooden Virgin Mary sex toy!” The press packet for Benedetta speaks loudly for itself, an eye-catching and/or hand wringing series of headlines from festival first impressions all the way to Liveline. It might seem like one of those “Sex! Now that I’ve got your attention…” signs scrawled in chalk outside an Ibiza boozer, but this is Paul Verhoeven, and the Dutch director has always had more on his mind than being immaturely incendiary.

If that makes it sound like a po-faced provocation, don’t worry, the genius of Benedetta is how joyful, bold and brattish it is throughout; genuine surface level emotions, the better to inform the deeper, more complex thoughts and feelings underneath. It’s satire at its best, having its cake and eating it too. In the same way that RoboCop was an acidic indictment of Reagan’s America but still also a sick movie about a Robot who was also a Cop, Benedetta is more than the sum of its provocative parts, a thoughtful exploration of faith and power and desire. But one that yes, also, it is a movie about lesbian nuns.

From a young age Bendetta has been convinced of her connection to the Divine, which prompts her wealthy parents to buy her way into the most expensive and therefore best convent in Tuscany, run by the shrewd Abbess, played by Charlotte Rampling. Money is the root of all here, and the Abbess rules the roost less with an iron fist and more with a Daniel Levy-like clasp on the church pursestrings, happy to extract a sizable dowry from the Carlini family to make their precocious daughter a Bride of Christ. She remains wary as the young girl grows up, now played by Virginie Efira – a devoted sister, no less devoted, if not more so, by her frequent erotic visions of Impossibly Sexy Jesus.

It’s not exactly hard to see why the film attracts tuts and protests, but a big point in Benedetta’s favour is that its director is examining his character’s beliefs in genuinely good faith. A former member of The Jesus Seminar, Verhoeven has written at length about Jesus as a radical activist, which informs his depiction both of Benedetta as an earnest but exaggerating miracle worker and of the Catholic Church as a palm-greasing enterprise en masse. It’s well-considered cynicism. When he shoots our nun’s red-blooded fantasies of being saved by Impossibly Sexy Jesus, him negging her into spreading the good word, it has the same gloss and emotional fervor of any religious scene on the big screen. It’s real to Benedetta, and the film takes that seriously.

That passion is supported by the committed performances. Everyone is going 90, befitting both the level of satire and the adamant nature of Catholic dramatics. As the Abbess’ daughter, Louise Chevillotte is a great supporting player, the Head Girl of the convent who goes from comedic to tragic. Rampling gives the story layers with her nuanced skepticism, withering stares contrasting to the wide eyes of her younger co-stars. Patakia too elevates her character as the story progresses, those aforementioned eyes bulging from unabashed lust, to terror and shame, to bruised bewilderment, back and forth, her body recoiling like a punished child whenever the power dynamic between Bartolomea and Benedetta suddenly and radically shifts. She has lust for life and love for Benedetta; where her partner directs those two things, she’s never quite sure, and Patakia capably depicts that uncertainty under her confidence. The chemistry between her and Efira, playful, palpable, full of the joy of discovery, charges through the film and the camera comes along delighted for the ride. Where some erotic thrillers protest too much about the source of their gaze and the spectacle of their sex, Bendetta has no sense of shame, nor delusions of grandeur. It’s okay to laugh at the Virgin Mary dildo, in fact, it encourages it, and while you’re here, it says, shall we discuss the personal and political fallout when devotion is outpaced by desire?

Capturing the camp of Catholicism in a way that few films do, holding the power players to task without punching down (too hard) on the believers, Benedetta is a provocation more interested in playing with you then showing off how smart it is. You can smugly settle into thinking you’re in on the joke, only for the film to pull the rug out from under you and give pause to your laughter. You can be outraged only for the film to bring you onside, then shove you hard back off again. It’s a romp in every sense, and a satisfying one at that. Recommended revelry for sinners and scholars alike. Just like RoboCop.

Where to watch Benedetta