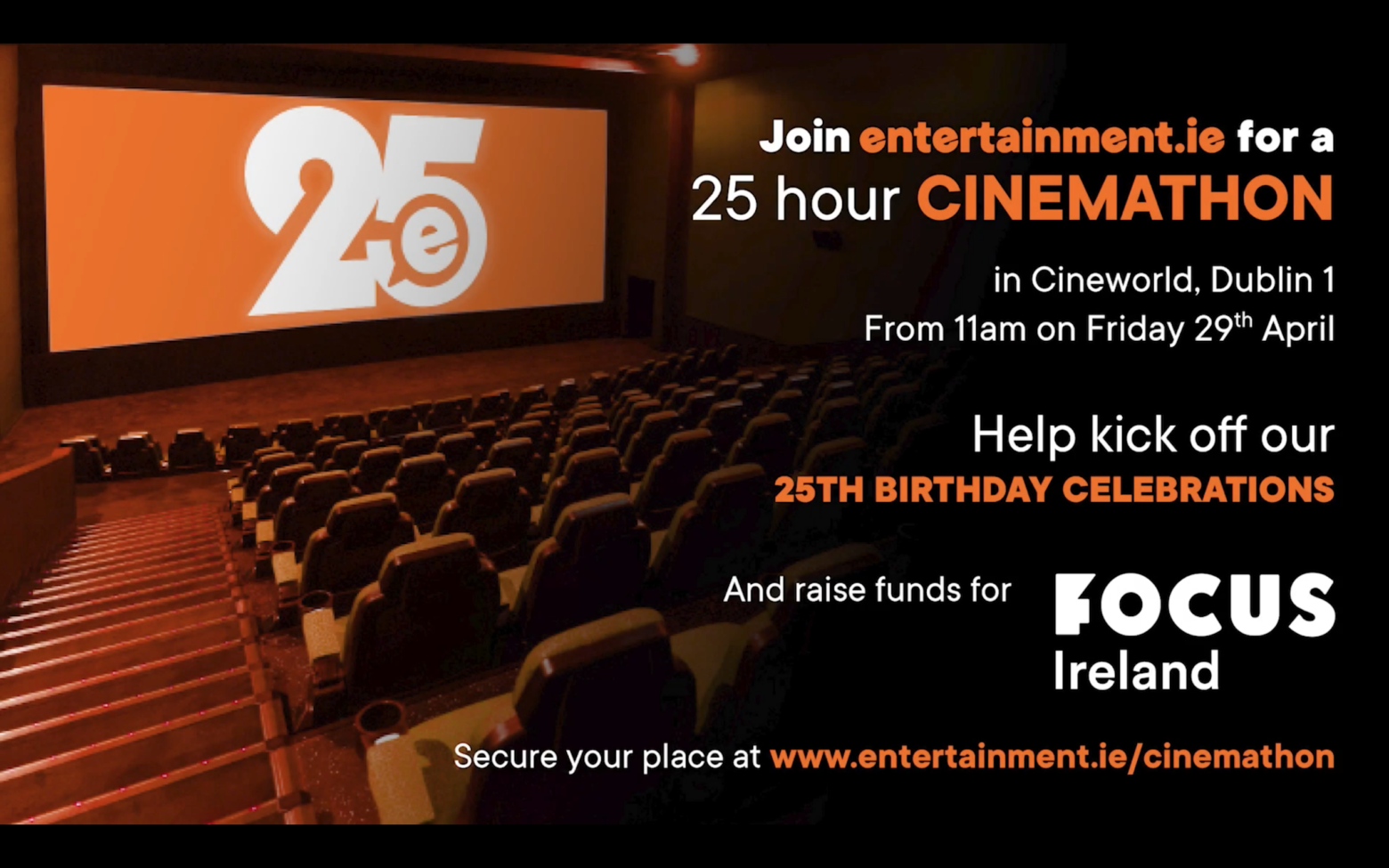 Our friends at Entertainment.ie are sitting through some substantial cinema later this month in aid of Focus Ireland. On Friday 29th April, they’ll be starting a 25 hour Cinemathon at Cineworld Dublin, to celebrate their 25th anniversary and raise funds for the homelessness charity.

entertainment.ie is well-known as one of Ireland’s best spots online reviews, guides and news for Movies, TV, On-Demand, Music, and Events; all things going out or staying in. In 2022 the site is turning 25 years old – To celebrate this and the absolute escapism that movie-watching brings, entertainment.ie has partnered with Focus Ireland for this cinemathon.

entertainment.ie movie editor Brian Lloyd is going to watch 25 hours of classic movies at Cineworld Dublin 1 and is looking for an audience of about 100 volunteers to join him for the challenge.

The schedule of classic movies has something for everyone in it but will be kept under wraps until closer to the event. A few movie titles will gradually be highlighted week by week. Rosie, Anchorman, The Dark Knight, Chinatown, The Shining, Blade Runner and Mamma Mia are some of the big hitters confirmed so far.

There will also be performances, competitions and challenges interspersed across the 25 hours to keep the audience stretched and energised when not movie watching. These intermissions will be livestreamed to encourage further donation to Focus Ireland over the course of the 25 hours.

To secure a ticket, those who register will be asked to raise funds for Focus Ireland (approximately €250) in advance of the event. This element will be managed by Focus Ireland with idonate. While the event features on the Focus Ireland website, initial registration takes place at www.entertainment.ie/cinemathon.

There will be quizzes in between films with prizes on offer and some guests will be popping in to support Brian and company along the way, discussing their love of cinema and titles coming up on the schedule.. Tickets are available on entertainment.ie/cinemathon, you have to raise a minimum amount of €250 to qualify and they’re looking to fill 100 seats to fill in the hopes of raising €25,000 at least for Focus Ireland.

Focus Ireland supports people who are homeless or at risk of losing their home. They also provide permanent homes for over 1100 households around the country for families and individuals who were previously homeless or at risk. There was great work done during the pandemic to reduce the number homeless from a record high of over 10,000 people to under 8,000. However, the numbers are on the rise again.

In Ireland there are currently nearly 9,500 people homeless, over 2,650 are children. A few hundred people sleep rough on the streets while the vast majority stay in emergency accommodation such as hostels, hotels, and family hubs. These are very unsuitable for long-term living and prove damaging to people’s mental and physical health and wellbeing.

“As the nation starts to emerge from the pandemic many people are suffering job losses and the effects of rocketing inflation. This means every action needs to be taken now to ensure we not only stop the rising numbers of families from losing their homes but that we aim to end this terrible human crisis. Focus Ireland works to do this through our services and by providing housing. Fundraising events such as this cinemathon challenge organised by entertainment.ie significantly helps Focus Ireland to continue providing these services and supports that so many people in Ireland rely upon.

We really encourage movie fans to step up to this challenge and register to watch a fantastic line up of classic movies back on the big screen – the place where they are best experienced and help raise vital funds to tackle homelessness at the same time. Sign up now at entertainment.ie/cinemathon while seats are available and best wishes with your fundraising.”

“For those of us lucky enough to access the cinema regularly, we get to experience the power of a brilliant movie. It can provide a gateway to another world, away from a turmoil in day-to-day life. So as entertainment.ie turns 25 years old, we’re keen to challenge a bunch of movie fans to fight sleep and watch a continuous schedule of amazing classics, back on the silver screen.  By keeping their eyes open for 25 hours, and participating in the livestream, they’ll be helping us raise significant funds for Focus Ireland to put to great use in addressing Ireland’s homelessness crisis.”

It will be a long, but very worthwhile day for fans in the fair city of film, from 11am Friday 29th April – midday Saturday 30th April.