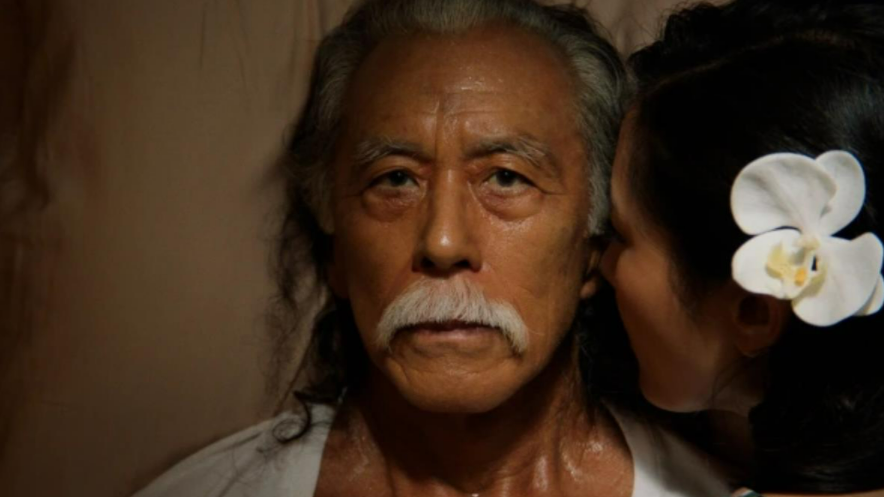 Having premiered at the 2021 Sundance Film Festival, I Was a Simple Man follows the slow and impending demise of an elderly Japanese American man living in Hawaii and pieces together the parts of his life that have made him who he is. Having already explored connections to ancestral Hawaiian roots in earlier features such as 2018’s August at Akiko’s, director Christopher Makoto Yogi is back on familiar ground but is bold and ambitious in his latest project.

Masao (Steve Iwamoto) is unwell and clearly approaching the end of his life. Even in the twilight years of his life, he is enduring financial struggles and is just about managing to get by. We see this through an opening interaction between Masao and a presumably close friend where his friend offers and then forcefully gives Masao a dig out with much needed money. Masao’s demeanour begins at it intends to go on. Feeble, reluctant, and slightly pitiful.

Accompanied by his dog (why can’t we have dog actors named in the casting list?), Masao retreats from the tall skyscrapers of Honolulu to the more rural Oahu North shore and is periodically visited by family members in his humble beachside house. The gatherings between Masao and his family members appear fractured and distant. Even as the elderly Masao appears to be knocking on death’s door, his children seem reluctant to stick around for any longer than they have to. Drinking more than he should and ignoring medical advice, the end appears nigh for Masao and nobody⁠—even those closest to him⁠—appears too pushed to care. While Masao appears to be accepting his fate with apparent indifference, things take a ghostly turn when his late wife Grace (Constance Wu) pays a visit and sets an extended and introspective life reflection in motion.

Everything in I Was a Simple Man looks beautiful. Of course, it would be difficult if not impossible to avoid capturing the natural oceanic beauty of the north shore region where events take place. However, cinematographer Eunsoo Cho does a superb job in soaking up the natural scenery while getting the best out of the nightly glow of the region. The film includes a number of dream sequences and in a very literal sense blends reality with supernatural cameos from dead past figures. With full advantage taken of the environment, a number of key moments wherein ghosts appear to Masao could easily be mistaken for horror scenes. There is a constant but quiet breeze that helps switch between reality and fantasy, the past and the present, and this is kept under control by a haunting and eerie soundtrack by Pierre Guerineau and Alex Zhang Hungatai. In as far as technical achievements go, the film impresses on all possible fronts.

Despite this undeniably beautiful exterior, there is no getting around the reality that I Was a Simple Man falls short in its cerebral penetration. Like the seashells off the Hawaiian north shore, many different themes are tossed around by a light breeze but none are ever deeply explored. The inability to deal with change is something that crops up frequently and this is reflected nicely in the tight script. There are numerous references in the dialogue to changes in the landscape and the difficulties associated with growing old. The problems we see in the present are neatly foreshadowed in the scenes where we peak into Masao’s difficult past. It is in this difficult past that viewers are exposed to interesting nuggets of information that delve into the relationship between Masao and his late wife. Importantly, the tensions and challenges in this relationship are contextualised in the broader culture. Yogi does this not only by framing a number of scenes at the periphery of World War 2 but also by examining the ethnic tensions between Japanese Americans and Chinese Americans. While many key details are left for the viewer to fill in, there is a taste of tragedy in flashback scenes. Although it is never entirely clear how, the weight of the trauma from past relationships appears to be linked to the health issues that are expediting Masao’s death and the distance that his children appear to maintain from him. The fault is that all of these elements are never truly explored with any depth. In the same way as it seems Masao cannot keep all of his recollections intact, the audience is left wanting when it comes to exploring the pivotal moments in his life and their broader cultural context. Intimations are everywhere in the body language of characters. Hints are dotted throughout the conservative script. Crucially, however, the substance of what makes Masao’s life worth reflecting upon are in scarce supply.

The hollowness of this excavation is particularly surprising when considering the film’s slow pace. I Was a Simple Man takes its time and never rushes any interaction. While the running time is a modest 100 minutes, you feel every minute and this is where the film will undoubtedly lose some viewers. Ironically, it might have been a wiser choice to give more time in order to flesh out the threads of Masao’s story and prune back some shots of the surroundings. So much of the film’s events are rooted in Masao’s life and the people around him, but many viewers will feel too closed off to achieve the level of emotional investment that would make the story flourish. In a way, it resembles the process of going to a stranger’s funeral. Of course, you can admire the beauty of the ceremony, but you just cannot connect on a certain level.

Much to admire, but even more to be desired.

Where to watch I was a Simple Man