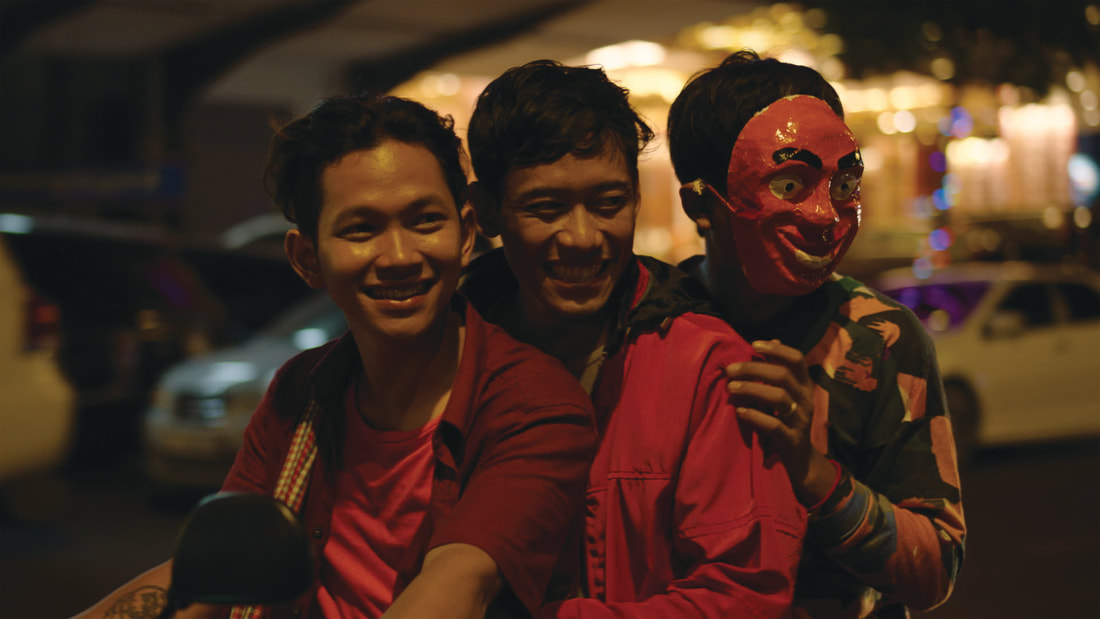 For filmmaker Kavich Neang, White Building is deeply personal. Already in his youthful but promising career, he has cut his directorial teeth by chronicling the painful destruction of the apartment block where he and his peers were raised. In 2019, he documented the final days of the iconic white building in Last Night I Saw You Smiling and channelled the fears and memories of its departing inhabitants. Undeniably driven by affection and loyalty to this community, he again approaches this delicate subject matter in his latest feature and continues to showcase the nostalgia and trauma associated with urban redevelopment.

From the very first shot of White Building, we are immediately introduced to the titular apartment block. Strikingly, the building has barely retained any of its shiny exterior and appears to have degenerated into a kind of mossy light brown colour. Immediately following this is a poster stuck to an interior wall of the apartment complex that promises residents an attractive buyout price for the square meters that they still cling to in the building. This gives us the unsettling context that we need. The residents of the white building are up against hostile forces that want to demolish and redevelop the place they call home. One of these residents is 20 year old Samnang (Piseth Chhun) who is busy preparing for an upcoming dance competition along with two close friends. The three young men play football, chase girls, and share a beer as they exchange jokes about who is dating who and how far they can go in their TV dancing careers. The initial laid back and meandering atmosphere is complemented by stunning visuals of downtown Phnom Penh, with Neang almost using the camera as another scooter on the bustling roads. Through the sounds of engine revs we can almost smell the petrol and feel the early evening heat that pierces Cambodia’s vivacious capital. Despite the relaxed feel that these early scenes establish, we are soon introduced to the impending demolition of Samnang’s cherished building. His father (played by the wonderfully understated Hout Sithorn) has a crucial role in mediating between anxious residents and eager corporate interests and is the de facto representative that deals directly with the redevelopment company. As if this task wasn’t stressful enough, Samnang’s father has deteriorating health issues of his own. Facing the imminent decimation of his childhood community, Samnang is keen to intervene and offer help but appears powerless when attempting to do so.

White Building is economical in its story telling. The script is pruned back to ensure that whatever can be told visually is told visually. This is boosted by the subtle performance of Piseth Chhun who understands that silence can be as effective as hammed up emotional outpours. Chhun won the Orizzonti Best Actor Award at the Venice Film Festival for this performance, and it is refreshing to see such a disciplined role being given such prestigious recognition. As a co-writer, Neang succeeds in letting viewers be more of a casual observer than an active participant of the unfolding despair. Arguably, the fact that the director is so well-versed in the subject matter could lead him to isolate viewers by not sharing things that audiences may feel they need to know in order to be emotionally invested. However, if Neang chose instead to include all aspects of the story that he personally feels could be worth mentioning, White Building could go on indefinitely. The film’s environment has a deep connection with the Khmer Rouge regime and is a relic of the artistic renaissance in Cambodia following the horrors of Pol Pot’s regime. Neang chooses to narrow the focus and this is reflected in the tight script. While there is an undeniably slow pace even throughout the most emotionally impactful scenes, the tight and disciplined running time of 130 minutes ensures that nothing overstays its welcome.

White Building’s most effective scenes undeniably come through its exquisite shooting and use of colour. We see a lot of the apartment complex both internally and externally. There’s a brimming tension between intoxicating fantasy and sobering reality that is consistent throughout and this is particularly effective in several dream sequences. The nightmarish consequences of unfolding events are envisioned in a manner that almost strays into psychological horror territory. From start to finish, cinematographer Douglas Seok is on top form. Like the director, Seok is also young but accomplished and was recently part of the acclaimed Minari. Here, the cinematographer captures the natural light and wisely chooses when to execute the money shots. Often, the use of natural sunlight against shadowy figures is eerily reminiscent of South Korean director Lee Chang Dong’s Burning in 2018. It is therefore unsurprising that Neang views Dong with reverence. Dong personally acted as a mentor to Neang at the Asian Film Academy in 2013 as part of the Busan International Film Festival. In several raw visual moments, Dong’s inspiration is beautifully palpable.

One possible limitation is that White Building maintains a strict emotional distance throughout. While steeped in trauma and despair, it often plays as more of a documentary than a dramatized version of events. Even our main character Samnang often comes across as an objective observer asking questions rather than someone personally entrenched in the degeneration surrounding him. But this is arguably an aspect of our main character that Neang deliberately wants to emphasise. The director has spoken about Cambodia’s collective inability to speak about the sensitive issues stemming from urban redevelopment in an emotionally transparent manner and has explicitly commented on the historical challenges of speaking out against authority. Seen through this crucial cultural lens, the persistent vocal silence here makes sense. The director’s choice to maintain tame passions should not be confused as apathy for Cambodia’s pressing social issues. Neang’s next film will examine what happens when a pregnancy emerges out of wedlock and the fallout that comes with that taboo. While his work in White Building appears to be restrictive in dialogue, this bold direction shows that the impressive young filmmaker clearly has a lot to say.

Well worth your time.

Where to watch White Building