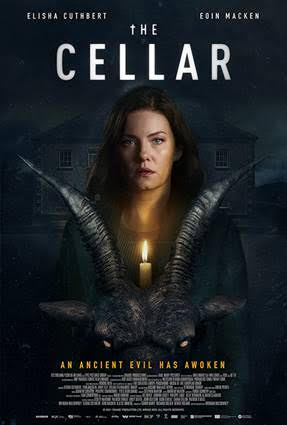 The long Paddy’s weekend may be over, but you can still enjoy Irish cinema this week, as Brendan Muldowney’s latest film arrives in cinemas this Friday. The trailer for his new horror The Cellar shows an ancient evil emerging for Irish and international stars to deal with. The dark and haunting feature had its world premiere at the prestigious SXSW Film Festival and closed the Fright Fest in Glasgow over the weekend.

Written and directed by the critically-acclaimed Irish filmmaker Brendan Muldowney (Pilgrimage) and starring Elisha Cuthbert and Eoin Macken, The Cellar tells the story of Keira Woods (Cuthbert), whose daughter mysteriously vanishes in the cellar of their new house in the country. Keira soon discovers there is an ancient and powerful entity controlling their home that she will have to face or risk losing her family’s souls forever.

Elisha Cuthbert is internationally known for playing Kim Bauer on the Fox hit series 24 and studio comedies The Girl Next Door, Old School, and Love Actually. Other notable projects include the Netflix series The Ranch with Ashton Kutcher and the ABC series Happy Endings.

Eoin Macken is an Irish actor best known for his roles in The Forest with Natalie Dormer and Resident Evil: The Final Chapter alongside Milla Jovovich. He also starred in the NBC series The Night Shift.

The film, which filmed on location in Roscommon, is an Irish/Belgian co-production with Conor Barry of Savage Productions and Richard Bolger of Hail Mary Pictures serving as producers.

Wildcard Distribution will release the film in Irish cinemas on 25th March. Check out the trailer for The Cellar now ahead of its Irish release.