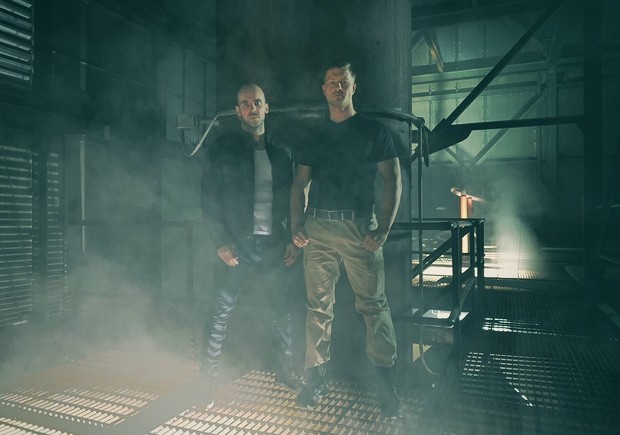 If there’s one thing you can say about Cop Secret with absolute certainty, it’s that it is the best movie to be made by a professional Icelandic goalkeeper…

Ok – that’s a joke that I’m positive will have been made 100 times by now. Except it really isn’t a joke: 2022’s Cop Secret is directed by Hannes Þór Halldórsson who has 77 caps for the Icelandic national football team which includes first team picks for their incredible run to the quarter finals of the 2016 Euros. The man has denied Messi from the penalty spot AND kept out Ronaldo’s efforts on multiple occasions!

Since dropping the gloves, Halldórsson has picked up a movie camera and returns to our screens with Cop Secret: a buddy cop/action movie satire set in Iceland’s capital Reykjavik. Following a string of bank heists that have terrorised the city, ‘Iceland’s Toughest Cop’ Bússi (Blöndal) must team up with his biggest adversary on the force, Hörđur (Einarsson), to thwart an evil plot that threatens the good people of Iceland. Is this maverick too hardcore for a partner? Will Bússi’s lone gun ways get the job done? Will he find love along the way…?

It’s hard to critique Cop Secret meticulously. The filmmakers clearly want nothing more than to have a laugh and, at times, I was laughing with them. By the time we reached the 15 minute mark, I had already counted four chuckles & one quite impressively orchestrated car chase sequence. I was unsure what to expect going into this movie as, despite some advertisement work (including one for Coca Cola), this is Halldórsson’s first big step behind the camera. However, the new director manages to pull off some entertaining, over-the-top action set pieces, all while poking fun at the genre and injecting plenty of jokes. Said jokes are pretty straight forward (and not wholly original) stabs at the usual cop movie clichés: tracking gangs through Chinatown, an evil villain (called Rikki Ferrari) explaining his ridiculously complicated plot, Bússi’s blatant disregard for ‘the rules’, etc. And yet, I laughed! They don’t all land, and those that do are pretty easy targets for the genre, but the actors performing these bits are committed enough to sell it. Their clear enjoyment on screen is infectious and goes a long way towards recruiting the audience on side (something I expect this will do as it hits more international markets).

I wish I could say that Cop Secret maintains the momentum of those first 15 minutes but, sadly, I can’t. As mentioned above, there are some laughs along the way but it isn’t until the film reaches its bonkers 3rd act that it fully embraces the absurdity of buddy cop-action movies like Lethal Weapon, etc. Until this point, the movie tries to draw more laughs from an awkward sub-plot revolving around Bússi struggling with his sexuality in the presence of the model-turned-cop Hörđur. It’s unclear whether the film wants us to find humour in the fact that this seemingly ‘macho’ rogue cop is coming out as gay or whether it’s trying to sincerely subvert the typical lead in these kinds of movies. Regardless of the intent, the idea is clearly underdeveloped and results in some cheap humour that really doesn’t land. As unoriginal as they are, there are laughs to be found in the cop movie clichés and Cop Secret should have doubled down on this for the full 98 minutes.

I think Cop Secret will find an audience internationally, and I think a packed theatre will heighten the experience for those watching (I watched this on my own as part of VMDIFF’s digital programme). If you’re willing to turn your brain off, there is some fun to be had. For those looking for something a little deeper or more original, I can’t say it is the movie for you. Nonetheless, I’m looking forward to what Halldórsson does next.

Cop Secret is reviewed as part of our coverage of this year’s Dublin International Film Festival – see more from us on this year’s DIFF HERE.