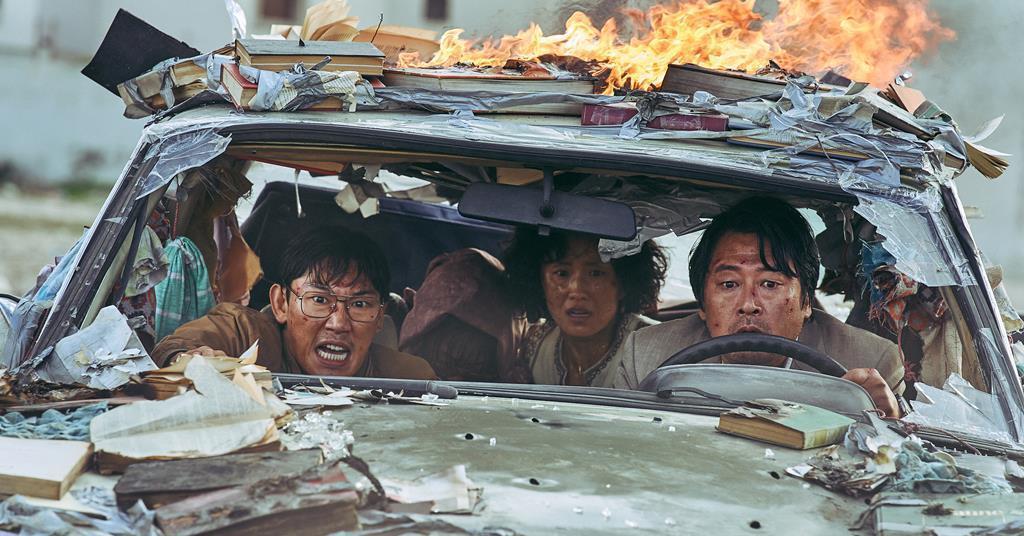 As can no doubt be gleaned from current global events, accuracy is important in depictions war. While factual accuracy should never be side-lined in pursuit of a good plot, it’s often the case that not all perspectives can neatly fit within one story. Such a caveat has to be considered when approaching Escape from Mogadishu, a film in which director Ryoo Seung Wan attempts to fit an intimate rivalry within the context of broader global unrest.

In 1991, Somalia is on the verge of full-fledged civil war. Clamouring for admission to the United Nations (UN), diplomats from both sides of the Korean peninsula arrive in the sweltering conditions of Mogadishu. For the South Korean delegation, the action kicks in straight away, as slick intelligence officer Dae Jin and Ambassador Han Sin Seong are violently confronted by rebel forces on their way to the Presidential estate. Having to reach the estate on foot, an out of breath Sin Seong notices that diplomatic meetings have already taken place between Somali Presidential representatives and North Korean ambassador Rim Yong Su. Fearing that North Korea’s meddling could undermine South Korea’s proposed UN membership, the South’s delegation scramble to get back in the good books and find an audience with Somali President Siad Barre. That’s the plan anyway, as local tensions reach a boiling point and foreign diplomats are forced to take shelter. Already placed in an immersive and kinetic experience, the ultimate task now invokes the titular challenge of escaping the ensuing carnage.

It’s not quite clear as to whether director Ryoo Seung Wan doesn’t have the time to get into the weeds with Somalia’s political circumstances or whether he simply wants to avoid doing so. Whatever the case, the limited focus on local tensions is the right call. It avoids furthering Hollywood’s insensitivities (and inaccuracies) when covering this conflict. The conspicuous lack of Somali actors in Ridley Scott’s Black Hawk Down is one of many examples. While the events hardly portray Somali citizens in a good light, the political fallout really serves as a plot device more than anything else. While Mogadishu is the setting, this is effectively a story about finding common humanity despite longstanding bitter differences. Having personally witnessed both sides of the Korean peninsula, it was intriguing to see how a South Korean filmmaker would depict Northern counterparts. Overall, it’s difficult to find any glaring issues, with Heo Joon Ho’s portrayal of the North Korean ambassador arguably the most nuanced and understated of several competent performances. The rivalry but also shared values between both sides are examined sensitively and the director is wise to prune back dialogue when showing these connections. Pushing past a two-hour running time, it’s often what’s unsaid that makes the biggest emotional impact throughout.

The strongest points of Escape from Mogadishu are technical. Shooting took place entirely in Morocco and it absolutely shows. The gritty heat of the war-torn atmosphere really comes across. Cinematographer Choi Young Hwan makes the most of the immersive locations and this becomes crucial in the film’s kinetic action scenes. Undeniably the finest parts of the film, the camera work and economical use of surroundings during tense car chase scenes are stand out features and call for big screen viewing. There’s the odd dodgy CGI dog here and there, but the director is refreshingly disciplined in making sure that plot events never cross a line into silly territory. There’s not as many combat scenes as you’d expect, particularly considering Seung Wan’s background as someone whose upbringing was inspired by his love for Taekwondo and Hong Kong style action films.

The problem is that Escape from Mogadishu peeks into various international conflicts but never really gets too deep into any of them. There’s a sense that Seung Wan and co-writer Lee Gi Cheol may have missed a chance to delve more comprehensively into the tensions and common humanity between the diplomats. These tensions and connections are there—and the filmmakers know it— but they remain frustratingly under probed. That said, the film is firmly marketed as an action-packed getaway thriller. Perhaps the nuances of inter-Korean relationships were never part of the plan and on reflection they may have really disrupted the pacing if they had been included.

For what it is, it works. For what it could have been, there’s something missing.

Escape from Mogadishu is reviewed as part of our coverage of this year’s Dublin International Film Festival – see more from us on this year’s DIFF HERE.