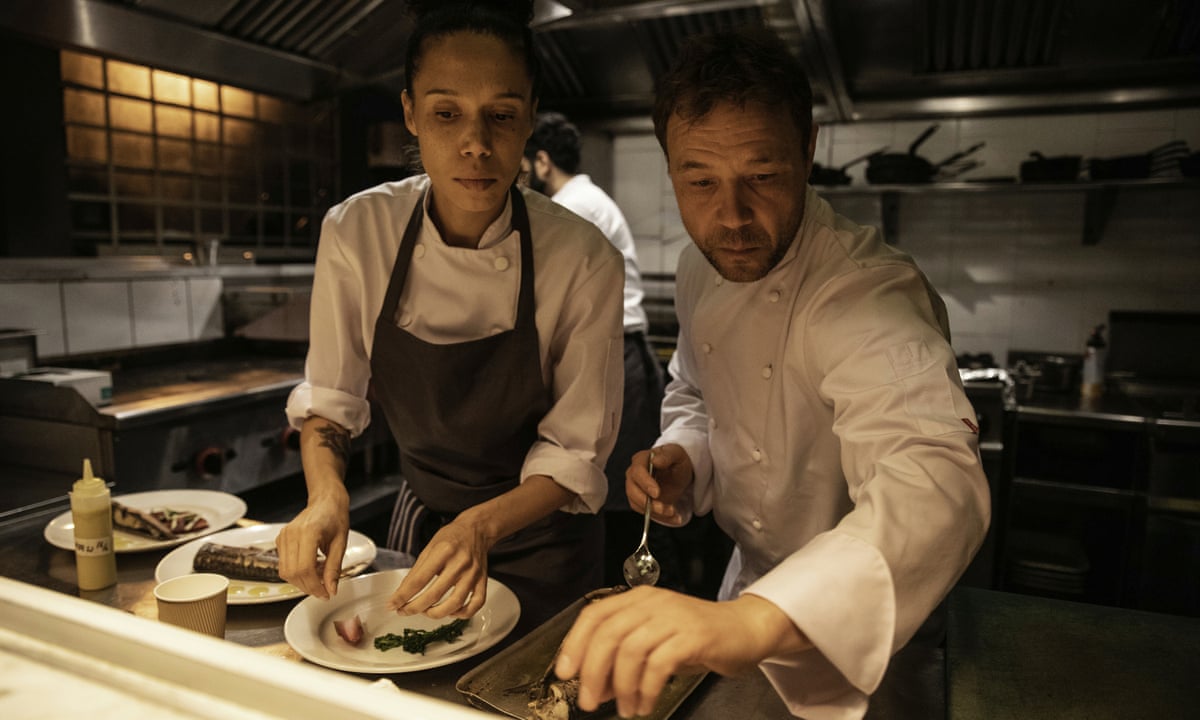 Absolutely nothing is new about our hunger for chef-related screen drama. From the seemingly endless incarnations of shows like Hell’s Kitchen to testosterone fueled performances in feature films like Burnt and Chef, there will never truly be an end to our gluttonous desire to indulge on the inner workings of a high intensity kitchen. For those who are familiar with this perilous setting, it’s relatable. For those unfamiliar, it gives us the chance to be a fly on the wall in a soul crushing environment that we’re shamelessly intrigued by but keen to avoid in real life. Whatever the familiarity of the viewer with culinary life, everyone appears well accustomed to the reality that such places are not for the faint hearted. Interestingly, one of the earliest attempts to channel the realities of a kitchen came in the form of a Gordan Ramsay vehicle called Boiling Point. That series could arguably be credited with launching our fascination with cuisine drama. However, the new feature length film, also called Boiling Point, by Philip Barantini, is arguably the most compelling depiction of the nightmares associated with operating in a restaurant. Importantly, it also serves us a window into one man’s descent into disarray.

Boiling Point is the manifestation of a very wise decision to expand a 2019 short film into a feature length insight into a chaotic and stressful night in the life of a head chef. Andy is played by the mercurial Stephen Graham who shines in a role that is made for him. From the very outset, there’s an immediate sense of anxiety and unease that Andy exudes as he rushes a worried phone call before stepping into his kitchen where he is immediately faced with the first of many problems on a hectic night. Having to deal with a pressing health inspector, he navigates through his surroundings in a manner that allows Barantini to subtly give us the geography of the restaurant.

It’s an important setting because it’s the only setting. Despite the physical limitations of where the camera can go, the space is used in a manner that maintains a sense of building unease. Graham cuts a capricious figure who both supports and antagonises his staff. Between the staff, there is both chaos and comradery. The disorder of the restaurant is also conveyed through other characters who bring new layers to events and give us more and more to be invested in. This aspect of Boiling Point is particularly impressive because it shows us the complicated and ever-shifting dynamics between different sections of the restaurant.

The realistic dialogue gives us the sense that those at front of house don’t really understand the challenges of being in the kitchen and that those in the kitchen don’t fully appreciate the realities of facing customers. This is helped by sound performances from Vinette Robinson and Alice Feetham whose interactions provide a simmering edge to the already strained tension in the restaurant. Uncomfortable interactions between staff and entitled customers show us this and challenge the cliched perception that the customer is somehow always right.

At the intersection of these interactions is a talented but clearly struggling man at the helm. Already hampered by personal and family problems, head chef Andy must deal with an obnoxious former colleague turned celebrity chef (Jason Flemyng) and his unexpected guest in the form of a prestigious food critic (Lourdes Faberes). The brewing tension between Andy and his now famous friend is palpable without Stephen Graham having to utter a word. As has been the case so often in Graham’s career, his face does all of the acting. His performance throughout Boiling Point represents the complex and nuanced sense of masculinity that was so jaw dropping in his role as Combo in the This is England franchise. There’s a strong sense that his external rage is triggered by his internal despair. At once you want to run from him and give him a big cuddly hug.

While Graham’s performance is undoubtedly the pièce de résistance in Boiling Point, its technical achievement as a single shot film must not be overlooked. There have been times where the use of one continuous shot appeared to be gimmicky, with Birdman being a notably overrated example. It’s always an impressive feat if done properly but sometimes it’s questionable as to whether it serves a coherent purpose. Perhaps the relevant taste test is whether single shot films are known for being a single shot film or for the substance within this shot. Boiling Point undeniably passes this test, and the use of the singular shot appears to serve important purposes. It facilitates a truly immersive experience and adds to a claustrophobic atmosphere in an already tense situation.

This technical aspect also doesn’t cancel out the other crucial ingredient of restaurant-based films in that it needs to make you hungry. Some of the most stressful scenes and most endearing interactions revolve around preparing and cooking food. While Boiling Point is much more than just a food drama, it doesn’t lose its culinary charm. Running at an economical 92 minutes, it’s a pressure cooker of a film that spills over into a panicky but highly rewarding viewing experience. For sure, it’s a welcome entry into 2022 that’s worth feasting on.

Where to watch Boiling Point