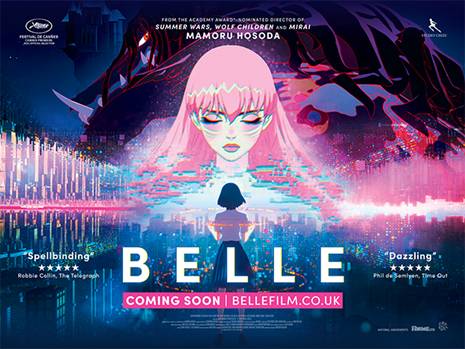 BELLE, the eagerly awaited new feature animation from Academy Award nominated writer/director Mamoru Hosoda (Mirai), will be released in Irish cinemas on 4th February. You can also catch its Irish premiere this month in Smithfield.

The Irish premiere screening of the anime will be hosted at the Light House Cinema this month, in association with the Japanese Film Festival Ireland. Taking place on Saturday January 29th, the JFF will be offering an early look at the film before its wider release, as part of their regular importing of some of the best cinema that Japan has to offer. Tickets for this screening are now on sale through the Light House website.

An exploration of identity, Belle focuses on Suzu, a 17-year-old high school student living in a rural village with her father.  For years, she has only been a shadow of herself.  One day she enters “U”, a virtual world of 5 billion members on the internet.   There she is not Suzu anymore but Belle, a world-famous singer.  She soon meets with a mysterious creature.  Together they embark on a journey of adventures, challenges, and love, in their quest of becoming who they truly are. From Summer Wars to Digimon, Hosoda has often been drawn to the potential for connection via the internet, and Belle may be his most acclaimed film on the subject yet.

Belle, which was produced by Studio Chizu had its world premiere at the prestigious Cannes Film Festival in 2021 where it received critical acclaim and a reported 14-minute standing ovation.

The animation will be released in cinemas across Ireland on the 4th February by Wildcard Distribution on behalf on National Amusements.