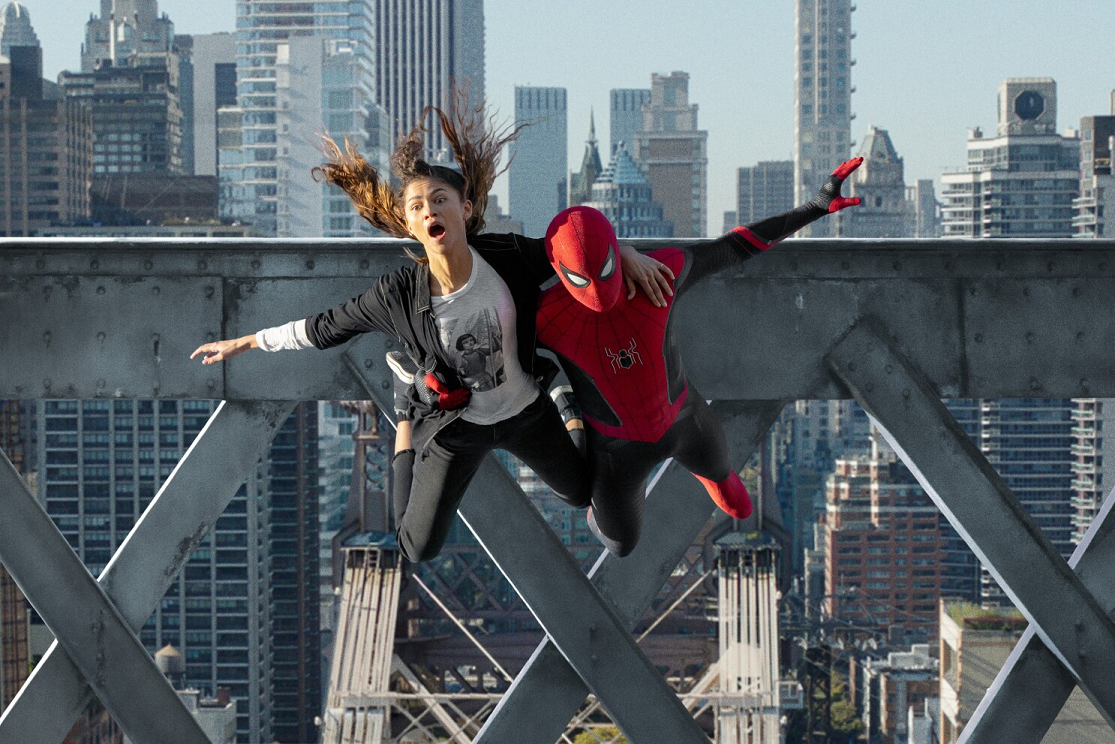 No spoilers. At every step of the way to seeing the latest blockbuster film, you’re warned, begged, contractually obligated, to provide no spoilers. Which is perfectly reasonable in itself, no one wants to be the arsehole raining on people’s parade. It’s also not new, Hitchcock was pulling a version of the same trick on cinema-goers years before Spidey ever made it onto comic book shelves. Increasingly, the issue with these films isn’t the spoilers you can’t discuss, it’s that the spoilers are, by design, the only thing to discuss. Is there anything of substance to cling to in No Way Home, or is it all loose threads of web, shot out and slung by in a flash, onto the next scene, onto the post-credits, onto the reaction videos, onto the next one? Am I even allowed to tell you yet?

Spider-Man: No Way Home picks up where Far From Home left off, with Spider-Man’s secret identity as Peter Parker revealed and the public divided on whether he’s really a hero or not. It’s fresh territory for the MCU, where they don’t really do secret identities, and poor Peter has to contend with the consequences, not just for him but for best friend Ned and girlfriend MJ. Secret identity angst can be seen as old news to viewers who have long since snarked at Clark Kent’s glasses, but like the previous Tom Holland Spidey-standalones, No Way Home shows the layers that this storytelling tool can help you to explore in a character. Peter can’t separate himself as a person from being a hero any longer. He has to consider what he, Peter, considers a heroic deed worth doing. What he wants versus what is important. He has to learn what exactly comes with great power (don’t tell anyone what it is until everyone’s seen the movie).

The big problem with these Marvel/Sony collabs has always been their reluctance to let Peter stand up as his own man, without other characters bearing the load – it leads to uneven stories and unsatisfying character beats, and it comes home to roost in No Way Home, a story where it feels perfectly natural that Peter would go ask Doctor Strange for help changing the universe for his own convenience. He’s this universe’s Harry Potter, the most special baby boy who gets coddled, fretted over and fed paper tigers to fight. When Strange’s spell to fix Peter’s problems goes wrong, it thrusts the webhead into a darker, more dangerous world. It’s grand when it’s telling this story. It’s just usually more preoccupied with Surprises, Big Moments and Epic Lols than things like ‘themes’ or ‘structure’ or ‘visual coherence’. And hey, everyone likes surprises. Not much is being done badly here. You’re watching charming, beautiful people be entertaining for your evening. Like Carpool Karaoke.

No Way Home is built to be a crowdpleaser, and please the crowd it does. They will hoot and holler and laugh, seconds after something theoretically tragic and life-changing has happened. But that’s Marvel. The tonal whiplash is getting worse, and while Holland, Zendaya and friends are entertaining enough to be eminently watchable, 2 and a half hours of schtick mixed with visual slop can begin to test one’s patience. Callbacks can be warm, fun, fuzzy and nostalgic, but they can also call attention to just how lazy things are here and now. How cheap a joke can be, or how ugly an action scene that takes the financial support of several countries can end up. No Way Home has so much going on that it devolves into visual soup when there’s action afoot.

This is a universe-hopping, all-out action, love letter to a cultural icon, that is less ambitious, artful, creative or sincere than when the exact same thing was done with the exact same character three years ago. Where Into the Spiderverse was a playful, colourful toybox of delights, No Way Home is an intricately wrapped empty box. Spoilers that exist only to be unspoiled, there’s no way home here because the map is only ever moving forwards, wiping everything behind it from memory in an instant. No journey, only destination.