The sixteenth edition of Culture Night will take place across Ireland on Friday 17 September 2021 and a number of special events in the fair city of film will be of interest to culture vultures of the cinematic persuasion.

Culture Night is a national moment celebrating all that makes up the richness and diversity of culture in Ireland today; connecting people to cultural activities locally and nationally and opening up pathways to ongoing engagement. Diverse events across the island take place to encourage artistic engagement, and the 2021 edition of the evening will mix live and online events to celebrate culture, creativity and the arts in an effort to actively promote the belief that a rich and varied culture is alive, treasured and nurtured in people’s lives, today and every day.

We’ve gone through the programme of the fun and free events at Culture Night 2021 and picked out a few film-friendly highlights you may want to check out.

Dublin Will Be Written In My Heart 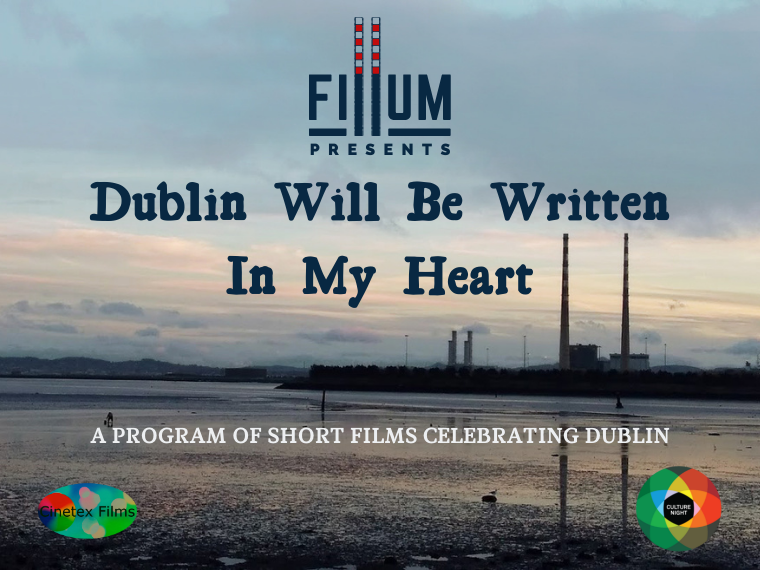 Presented by Fillum, ‘Dublin Will Be Written In My Heart’ offers a night of short Irish films celebrating Dublin in all its glory, blemishes and beauty! The perfect opportunity to reconnect with friends in a live venue and celebrate the Dublin we have all been missing, with special guest poet Hazel Hogan present also alongside a programme of 20 short films, in a variety of styles, all with Dublin as the linking factor. Dublin Will Be Written In My Heart will take place at The Circular Bar in Dublin at 6.30pm and another session at 8.45pm – tickets are free but advance booking is recommended. Stay tuned to Film In Dublin for more on this celebration of the city in the weeks ahead.

The Community Music Collective is a socially inclusive Social Enterprise created by Paul Woodward and Ernie Beggs. Music Therapy can be an effective tool in building up the confidence needed for people affected by social exclusion due to a number of factors and the CMC approach fosters positive human relationships which is an essential and transferable soft skill. To achieve the group encourage learners to release the artist within. For Culture Night the Community Music Collective will be showing a number of their short films online from 3pm. Call 085 736 3669 for more details.

Short film about the history of No. 6 Harcourt St. The film offers great insight into the building and the stories that happened inside of it. Available to watch online for free. Live on Youtube at 6pm.

The School of Mandarin Chinese and Taipei Representative Office present this Taiwanese documentary about how cross-cultural differences, social and technological change impact modern romantic, family, self, and tech relationships. An introduction to the film can be found here https://www.relationshipsmovie.com/about.

Relationships will be shown at the Savoy Cinema. The O’Connell street cinema will be open on Culture Night from 4-11pm, and the screening will take place at 6:30pm. Following the screening, a reception will be hosted by the Taipei Representative Office and Dublin School of Mandarin Chinese.

The Embassy of Austria offers this local film for online viewing. The woman behind the camera becomes the focus. Joerg Burger´s portrait of Elfie Semotan begins in southern Burgenland, Austria. An old wine cellar is being converted to accommodate the protagonist’s archive. Photographs are sorted in preparation for an exhibition, including striking portraits of Naomi Campbell and Claudia Schiffer. Six decades after her start, Elfie Semotan reflects on her work and status as icon of advertisement, fashion, and photography. With English subtitles.

To highlight the high rates of suicide in the Traveller Community, to reduce the stigma associated, and to  promote services equipped to support the community, this group of Travellers has written, performed, and produced a trilogy of films to artistically tell their stories.

The first film in the series, “It Doesn’t Matter”, saw a unique and large collaboration of a number of groups. Among them were  a group of Travellers from Ballyfermot, Finglas and Coolock, Ennis Mental Health Services, Exchange House Ireland, Turn 2 Me, film producer Pat Comer of Comer Productions, and performance artist and acting coach Sian Ní Mhuirí of Super Paua. The film was released online at the First Fortnight Festival 2021, and the group has since gone on to add a further two short films. The second film, “John Boy”, was released at the 33rd Galway Film Fleadh this July.

The three films will be screened this Culture Night to promote awareness of this crisis and show support for the Traveller Community. This event takes place from 4 and you can get more info here – www.exchangehouse.ie

Goethe-Institut Irland – Erich Kästner on Film – “Emil and the Detectives”

The whole family are welcomed to enjoy Franziska Buch’s film adaptation of Erich Kästner’s classic children’s book “Emil und die Detektive”. Travel with Emil to Berlin for an exciting manhunt, in this enchanting story of childhood, adventure, and friendship. The film will be presented in German with English subtitles on the online film platform Goethe on Demand from 5-10pm on Culture Night. No booking is necessary, but register now at at irland.goethe-on-demand.de

An anthological journey through the versatile work of DSK, formed by Juan Lesta and Belén Montero. Linked during their 20 years of activity, at the avant-garde and pioneers of video art, the pair created experimental hybrids between different disciplines. Their pieces are rhythmic, poetic, futuristic, and kitsch. This online Spanish audio-visual program will show 14 short films with English subtitles. See more at  vimeo.com/institutocervantes

We are Motherland Screenings

Check out film production on Hill Street with Motherland. The Dublin-based production company and 2019 recipient of the Irish Production Company of the Year (Kinsale Shark Awards), will present a selection of short films, documentaries, and music videos made by an array of award-winning Irish filmmakers from 7pm.

From 8pm at Barnardo Square, Screen Ireland will be host to an outdoor event of short film viewings. This year’s collection of short films for Culture Night are all Irish offerings directed, produced or written by female filmmakers.

The Irish television and film industry is currently buzzing with talent and energy – now it’s your chance to take part! Whether you’re the next Saoirse Ronan or a complete amateur, you are welcome to come and learn the basics of screen acting this Culture Night. On the training grounds of hundreds of Irish Actors, tutors from the Gaiety will introduce you to the art of performing for the screen and help you on the way to the stage of the Oscars…

This 90-minute class will have strictly limited numbers, so advance booking is essential, see gaietyschool.com or call  01 679 9277 for more info.