In Direct Line, Film In Dublin cuts to the chase, asking quickfire questions of Ireland’s directors to get a brief look into their outlooks, influences and inspirations.

With a storied career in theatre, television and film, writer, director, producer and performer Róisín Kearney is no stranger to those familiar with the Irish film scene. Her latest short film is Paddy, a story of identity soaked in 70s London Punk scene sweat. Funded by Creative Ireland and Clare Co Co, the short premiered last year at the Galway Film Fleadh and is one of the home-grown films currently available as part of this year’s Virgin Media Dublin International Film Festival.

During DIFF, Film In Dublin got onto Róisín for a quick chat about her latest film, how her background in theatre has helped her in film and more.

I loved film but really didn’t get much of a chance to go as a kid, it was a big deal, a major event to be brought to the cinema. I loved drama, music, dance – anything that could transport you out of yourself. I worked as a theatre technician and shot on super 8 film for a back projection on a theatre show. That was the first time I realised it wasn’t completely out of reach, that it could be affordable and you could make beautiful art on screen.

What is a film that you love that not enough people know about?

There are lots, but I love Disco Pigs, and Redemption of A Rouge because both have a theatrical element to them. I love that you can have that power in film, you can have the real and surreal side by side. I used it a little in Paddy, using both sound and picture to try and climb inside his head, cutting between the ‘real’ downstairs and the surreal upstairs. As a mother it is your worst nightmare to think that your child is in pain and you are unaware, as a teen, that self annihilation and in Patrick’s case rebirth is something most I think can identify with.

What kind of stories do you feel most drawn to as a viewer?

Who would you say has had the most impact on your creative career to date?

There are a number of people I could mention but theatre director Gerry Morgan (RIP) was my first boss. He created theatre with actors, through improvisation as well as scripted. Every element, every person, was as important and valued as the next. A confidence builder, he would push you to take risks, and for him it was always about the art.

Have you seen many other shorts during DIFF and would you have any recommendations?

So many,  but I loved Her Song which won best short. In the international shorts Kosher which I found incredibly moving. I could list lots more but I’d only get myself into trouble. We are so lucky to have a really strong Irish contingent of film makers in VMDIFF this year, every one of them deserve a mention.

What’s something from online festivals you’d like to see kept when we can sit in cinemas again?

I can’t wait to get back into cinemas and be able to consume film as it should be, on a big screen surrounded by people. But I do like the accessibility on having online content. Some sort of a hybrid would be great. It would also mean, if you have time constraints, or can’t get to a festival due to finances you can still feel part of it. It allows for an audience  who may not be able to, or feel comfortable with attending for whatever reason.

How would you describe Paddy in one sentence?

Life in 1970’s London, a first generation London boy of Irish parents uses a new music, punk, to find his own place in the world. 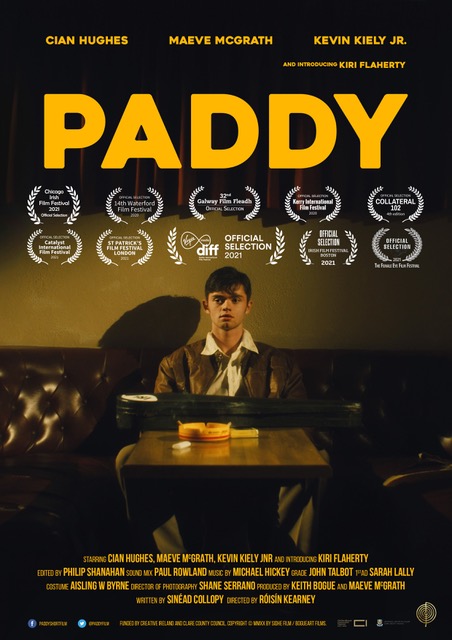 What was the biggest thing you learned while making this film?

Surround yourself with good people and trust yourself to make the film you have played in your head a thousand times.

What was the best day you had on the set of Paddy?

It was shot in three days, with a lot of locations so it was pretty busy. I think shooting the punk band scene was brilliant, Kevin Kiely Jnr  who plays Fla just absolutely gave it his all. He must have had to preform the song 20 times, and each performance was as powerful as the next. Chris Rowley as our barman, was so much fun,  Michael Hickey, who also wrote all the songs for the film as our drummer, all the students who shadowed, it was really busy with people and shots but everyone was there for one reason and worked together so well.

Where can we see Paddy next after DIFF?

Who else in Ireland should we be watching at the moment?

Our two young actors, Cian Hughes and Kiri Flaherty should definitely be closely watched, they are wonderful. I have such a long list of actors I’d love to work with, I won’t even try to start mentioning them all.

Writer/Director wise,  there is so much real talent out there, and I’m lucky enough to get to read lots of scripts.  Mo O’Connell and Gemma Creagh are working on a feature script I’m excited to see, Sinead Collopy who wrote Paddy is also working on the feature script of it, called ’77, I love Bonnie Dempsey’s work and look forward to Laura O’ Shea’s next offering. Laura Way I know is shooting shortly and  I’m very excited to see the end result. From our crew alone we have Phil Shanahan creating some amazing work, and Shane Serrano has directed a short film thats almost completed. There are so many out there to keep an eye on outside of writers and directors, there is a growing pool of talented crew, musicians, CGI and post production. These are also the people we should be keeping an eye on.

There are a few more people and projects I’m excited to see, but if I told you I’d have to kill you!

How do you create a positive atmosphere on set?

Its very easy done when you are around good people. Respect others, respect their talent, their knowledge, all the reasons they are on the set with you in the first place. Oh, and feed people well! 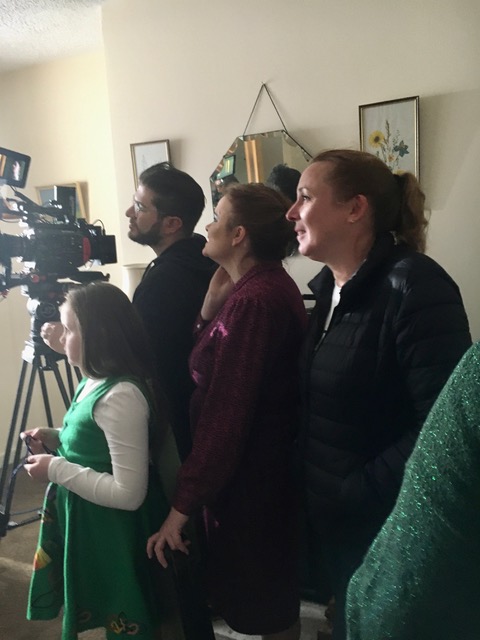 Film, I’ve worked with both, there is something really beautiful about film that I haven’t been able to recreate, though it is a relief not to have to check for a hair in the gate.

Everything you did, every shot cost so much you made sure you did not have to “go again”. I worked on the first digital feature shot, which was made on Jersey Island, directed by Stephen Kane and produced by Triona Campbell. A tiny budget, it really is where digital came into it’s own. It has made it available to anyone who wants to be a filmmaker, which means it is accessible to far more people than in the past. That can only be a good thing.

Can I say Horslips??? I do love both, but punk might win out.

What’s something that you wish you knew on day one as a director, that you know now?

To be really careful about continuity!! And say exactly what you want from a shot.

What is the number one thing a director should NEVER do?

Never talk over people. Everyone is there for one reason, to make a great film. Listen to the talent in the room, cast and crew, give people the space to take ownership of their area of expertise.

What’s the first thing you’d love to see on the big screen when cinemas can reopen?

Paddy! I’d love to see it on a big screen! I would love to see Redemption of a Rouge and Arracht on a big screen, there are a list of others, I have had a great time watching in all the online festivals, but I’d definitely go and see them all again in a cinema if I could.

What do you look forward to most when you start a day on set?

Bed?? No, I love working with actors, taking that time to go through where they are emotionally in each scene. Most of the other work can be done before you get to set, everyone knows what the shots are and how they should look. So as the set up happens it is your chance to chat to the actors in the space, in costume.

I mainly write comedy, but I love watching story told using as little dialogue as possible. The Piano, Portrait of a Lady on Fire, Woman At War films the transport you, when you feel the characters emotional journey, and it stays with you. I am working with Paddy producers Keith and Maeve, along with poet and playwright, Rita Ann Higgins on a film I think can be really special, so maybe it will come true.