In this week’s Review Round-Up, we look at another pair of excellent films that flew under the radar at the height of the Covid-19 pandemic. Catch them now on VOD and enjoy the cinema experience from your own living room! Throughout the month of November, keep an eye on FilminDublin.ie for even more recommendations on the best 2020 films so far.

The Wolf of Snow Hollow 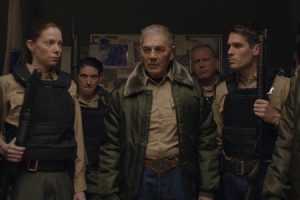 Fresh off the success of Thunder Road (a Sundance & SXSW favourite), very few people expected Jim Cummings’ next film to have anything to do with werewolves. Set in the titular sleepy mountain town, The Wolf of Snow Hollow follows Officer Marshall as he leads a small group of local law enforcers in an effort to catch a killer who hunts in the light of the full moon. As whispers of a werewolf begin to mount, Marshall must confront a town full of people who are beginning to lose faith in him, all while struggling to maintain relationships with his ill father & teenage daughter.

Despite the inclusion of a potential werewolf, Cummings’ 2nd feature film shares a lot with his first (Thunder Road – currently streaming on Netflix and highly, highly recommended). In both films, we spend time with a man on the edge of an all-out breakdown, struggling to connect with those around him and make sense of the escalating drama he finds himself in. Where The Wolf of Snow Hollow differs is in its use of the horror genre to tell this story: scenes are frequently eery, darkly lit and often punctuated with bloody finales as Marshall investigates these murders. In all these new territories, Cummings demonstrates a brilliant understanding of how to build genuine scares, cultivate mystery and utilise low-key but effective set-pieces.

While undoubtedly an engaging murder mystery, The Wolf of Snow Hollow works even better as a thought-provoking character study and eccentric comedy. As the old cliché goes, the film is less about the monsters roaming the streets and more about the monsters within. As writer, director & star of the film, Jim Cummings is able to capture an enthralling depiction of one man’s escalating anxiety and deteriorating mental state. The film’s pace and editing style is always matching Marshall’s state of mind: scenes either slowly dissolve or quickly jump into the next depending on Marshall’s most recent defeat or outburst. The movie demonstrates a genuine love for its main character as well as an understanding of his situation, allowing us to sympathise & criticise him while also being able to find the inherent comedy in the otherwise absurd & dark situations he finds himself in.

The comedic elements of the film are elevated further by some razor-sharp writing and hilarious performances (I have been quoting multiple lines from this film for the last few weeks!). While Cummings’ performance is the stand-out and Riki Lindhome does a great job, it’s hard to ignore Robert Forster in what has turned out to be his final role. The Wolf of Snow Hollow takes on new relevance when seen as the last film that this true great would act in and is a fitting send off for a man who delivered countless great performances over the years.

The Wolf of Snow Hollow is genuine delight and one of 2020’s must-see films. 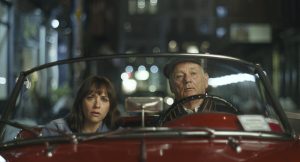 When news broke of a Sofia Coppola & Bill Murray reunion early this year, there was great excitement amongst film fans everywhere. The pairing’s first outing, Lost in Translation, took the world by storm in 2003, earning Coppola a Best Screenplay Oscar, Murray a Best Actor nomination and the film’s producers nearly $120 million at the box office (having only cost $4m to make!). The film resides in a special place in most film fans’ hearts, all of whom were likely booking their tickets in advance for On the Rocks – a father-daughter comedy-drama set in modern New York City. However, it is this fan’s opinion that On the Rocks isn’t the Coppola/Murray reunion we had all hoped for…

As Laura (Rashida Jones) – a young & hard-working mother of two – starts to develop suspicions surrounding her husband’s fidelity, her worries are amplified by an unexpected visit from her playboy father, Felix (Murray), who convinces Laura to investigate her husband’s behaviour. As night falls on New York City, the duo begins to follow Laura’s husband, taking time to fix their own fractured relationship as they anxiously wait for their suspicions to be confirmed.

On the Rocks isn’t so much of a bad film as it is a disappointing one. The film moves with the same flow and style as a direct-to-TV film: devoid of any sort of visual flare, unique character beats or interesting editing. Cities like New York have been the playground of many great directors over the years, all of whom are able to bring to life the character & colours of the city to tell whatever story they wanted to. In On the Rocks, our story is set in a sterile, isolated version of New York, where one street blends into the next only to provide a grey background for our plot to play within. On top of all this, the plot itself never truly develops a bite to it. While sympathetic to Laura’s concerns, you are never truly convinced by them as major plot points feel generic & predictable from start to finish.

The film isn’t totally without its merits: while never fully convinced of the chemistry between our two leads, the back and forth between Laura & Felix can be, at times, amusing. Murray gives another charismatic performance as Felix, a philandering, larger-than-life figure and self-ordained authority on the opposite sex. Murray’s performance brings the only depth to be found within the film as he portrays Felix as a charismatic & confident man, but one who cares deeply about his daughter. While it never reaches anything like Lost in Translation’s superb performance, Murray is enjoyable in the role and demonstrates a near-effortless charm in his movies yet again.

Given the wealth of talent involved, On the Rocks really should have been so much more than it turned out to be. Rather fittingly, this is one to catch as film of the week on TV sometime in the future. In the meantime, watch The Wolf of Snow Hollow.