An award-winning actor, writer, director, and producer, Maureen O’Connell is a recognisable name to anyone with an eye on the Irish film scene. Her short films, wide ranging comedies like Meitherhood or the 1916-themed Proclaim! are regular selections for any solid Irish festival programme. More recently, the director’s comedy feature Spa Weekend has been a hit at festivals home and abroad, screening in British and Irish festivals and last year winning the ‘She Is On Fire’ Award at the Female Filmmakers Festival in Berlin.

Looking ahead to the festival, Film In Dublin got in touch with O’Connell to get the direct line on her comedy influences, lockdown filmmaking, festival aspirations and more.

I used to shoot fairytales on my Dad’s VHS camera when I was a kid living in the hills of Wicklow. It was lots of fun! I tried to emulate Spielberg with a VHS camera.

How do you prepare for a day on set?

Wear comfy clothes. Bottle of water. Sweets in my pocket for energy. Besides that, I’d make sure of shotlist & storyboard for umpteenth time. And by this stage I’d have rehearsed with my actors already & I’d be looking forward to working with the actors and crew.

Working with actors and crew.

How much work goes into organising a film festival?

Too much work. Ha! Setting up website, watching, rating and choosing final selections, ensuring people for Q & A’s, designing awards, PR, so, soooo many emails, texts and phone calls on a daily basis.

Why did you want to set up a comedy film festival specifically?

I thought it was odd that one had not been set up in Ireland before now. I had waited for one to appear and then, it never did! So, I thought I would do it myself. Ireland is packed full of funny people and filmmakers who know how to make audiences laugh. I thought that this should be celebrated.

Also, comedy can often be overlooked at regular film festivals in favour of drama. I have said before and I maintain that comedy is harder to write, direct, act in and produce.  It requires a lot more skill; not only are you telling a story from A to B to C, with all its varying beats etc… You are also telling jokes at the same time. And they have their own journey from A to B to C. And they need to land and make people giggle. If they don’t, you’ve made a bad drama.

So, you are juggling more balls making a comedy.  You have to be braver to make comedy. Or an idiot. Or maybe both. Be a brave idiot and make a comedy!

What is it like selecting films for a festival when you’ve submitted them yourself in the past?

It makes you see what it’s like on the other side! And you appreciate film programmers more.

It also makes you empathise with the filmmakers more and you see what they are trying to do in a film especially if they have no money.

What’s the best way to approach working with actors on set?

Ask them what they want from the scene/other character in the scene. You want actors to come to the answers themselves. It makes for a more authentic performance. If you give actors all of the answers, sure, you look like a ‘smart’ director but they’ve lost the experience of discovering it for themselves and we have lost that authenticity in their performance.

What would you say to encourage audiences to watch short films?

I would say, if you’re sick of Netflix, have a look at these. They can be inspiring too. They make people feel like they could perhaps make a film themselves.

What are some comedy shorts you’ve seen before the festival that you might recommend?

Rhona and Donna by Daina Pusic.

What for you is the greatest comedy film of all time?

Who are some of your own comedy inspirations, in terms of directors?

For comedy, which do you prefer: solid scripts or lots of freedom to improvise?

Solid scripts but freedom to improv.

Who else in Ireland should we be watching at the moment, besides yourself!

Oh something like, an Irish version of American Beauty.

Is it better as a filmmaker to work in one genre or to try out different things? 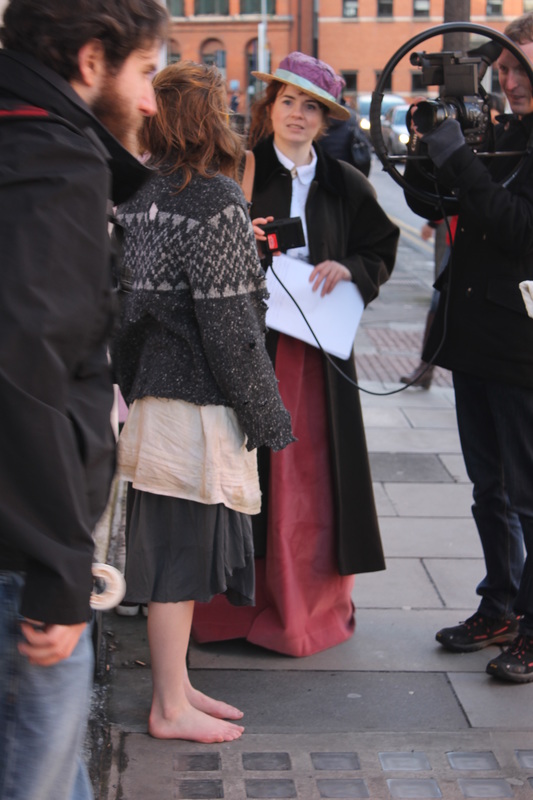 What is the best way the industry in Ireland can support up-and-coming filmmakers at the moment?

Screen Skills Ireland are doing a great job at the moment with providing courses and mentoring programmes for filmmakers. More of this, I suppose! But, still, bravo for everything they are doing! Screen Ireland has gone above and beyond itself during these Covid times too in supporting filmmakers and production companies. I would tell up and coming filmmakers to reach out to them.

You made a short Eve during the first lockdown, what was the biggest lesson making a film during lockdown?

We did yes! It was a lovely project. The biggest lesson was that you can do it. Any and every project you work on has limitations and borders. You must always think creatively given your resources or lack thereof (usually lack thereof!).

How did that film come together, what inspired the project?

EVE came together because Tommy Creagh and Camila Reyes had written a ‘quarantine’ script for a BBC competition. They got very far in the competition but didn’t quite make the final cut. So, Tommy asked me if I wanted to direct it and I accepted the challenge.

Zoom is pretty great! And they’re updating all the time so there’s more you can do with it. We did 2 x 40 minute rehearsals (as it was free!) and then we shot the film in 2 takes. It just makes you sharper as a director when you know you have so little time; you must be concise and efficient with your direction. The actors were fabulous too, so that helps! Helen Roche and Rachel Walshe are so lovely and so, so talented.

What are you most looking forward to at the Dublin International Comedy Film Festival?

Really looking forward to presenting Dave Made a Maze, a feature film by the brilliant Bill Watterson from the USA. He will be receiving the Elaine May & Richard Pryor Award. This is an award we will give to a film/filmmaker every year who we truly admire for their grit, creativity and abundance of raw talent.

I am looking forward to presenting all of the films/web-series/sketches & meeting all the fabulous filmmakers and chatting to audiences too!

What’s next for you after the festival?

I directed a Screen Ireland short during lockdown called HUM. It is written by Ivan Cush. That was a different beast altogether. We all had to be on set keeping 2 metres distance and wear masks constantly while washing our hands every 2 seconds. My actors on this were Bosco Hogan and Barry John Kinsella. Legends both.

They both risked coming on set during Covid for this film. They couldn’t wear masks when they were acting and had to sit quite close together.  With all of this, they did such a tremendous job. This film is now premiering at the Cork Film Festival much to all our relief and delight.

I am also developing a feature film FAIR GAME from a short I made, GIRLS, with Gemma Creagh and funded by Screen Ireland.