For years the Carlow Arts Festival has aimed to create a vibrant community in the Midlands fostering creativity, collaboration, innovation, participation, inclusion, diversity, and passion, but the Covid-19 Pandemic ensured that they were one of many endeavours in the arts who were forced to rethink their approach in 2020.

One of their efforts throughout the last month has been their Virtual Reality Cinema programme, which offered viewers the opportunity to replicate the experience of 360 degree filmmaking from the safety of their own home.

Through the summer we’ve been dropping into the cinema when we can, but it’s still not a matter of dropping in every few weeks, if that – we too have had to adapt. And so it was that I found myself requesting a VR headset by sent from Carlow to my humble Northside apartment (the writers of this site do not, despite some of our best efforts, live in the cinema. A small cardboard box soon arrived courtesy of the festival organisers, in the Arts fests black and white colour scheme with some simple instructions included; how to pop your own phone into the headset included to get it all set up.

It isn’t quite the sophisticated tech of the future promised to 90s kids by VR Troopers, but it’s the niftier for it. A simple pair of lenses, a bit of velcro and simply assembled cardboard, then once you insert your phone with the screen facing the lenses and more functional and cost-effective than any mega-expensive piece of tat from the billionaire companies ruining our lives. 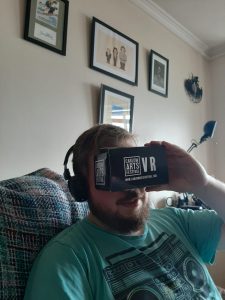 Here’s a review of sorts of some of the short films that were on offer through August as part of the festival’s Virtual Reality cinema.

Definitely among the more eye-catching offerings, this combo of contemporary dance and motion capture saw dancers move in a full 360 around a flashy sound stage as they told a story of the movement of the solar system using their bodies. ‘Following’ them and noticing the sun in the background get ever oppressively bigger until it ‘surrounded’ me was a quick but captivating use of tech. 4

An aural experience as much as anything else, enhanced by the visuals, but the crackling of ice and pulsing magnetic sounds of the Arctic pull you in here, as much as the early Costeau-light narration might pull you out of it. A vibing sensory experience. 3

Some very simple graphics and basic comedy at play here, putting you in the position of one puppet in part of meta-VR “pitch”, like Toy Story but very much not like Toy Story. Could see the gags in front of my eyes, but could feel my foot tapping impatiently bringing me back out into the real world 2

An interesting experience, going through space from the Moon to Mars and beyond. It’s fun to ‘look around’ these celestial spaces. Made for one of the more emotionally engaging of the short. 4

A VR documentary that looks at a new wave of artists in Saudi Arabia. Following artists through the country as they go through their process is a smart use of the medium, and standard doc techniques like talking heads get a fresh perspective looking at them through new eyes. Gratifying to see and hear Saudi women artists call for more space and freedom to work and show their experiences. Where some of the VR shorts concluded exactly as they had done everything they needed to do, would have welcomed seeing sitting with the headset a little longer to hear more fron these artists. 4

All in all, while the immersive VR experience is unlikely to take over cinemas any time soon, that’s more a matter of the medium being its own distinct experience, rather than being a matter of inferiority. More film festivals could benefit from this kind of outside-the-box thinking (even though that actually was in a box…), to diversify their programming and offer opportunities to a wider range of filmmaking. Hats, and headsets, off to the Carlow Arts Festival for offering this fresh perspective on short film over the last month.