It’s our monthly round-up of Film In Dublin reviews and views. Check out our thoughts on some of the films released in Ireland in March 2020 below:

Note: For obvious reasons the release schedule has had a bit of blockage of late…a number of films found in our February round-up are worth checking out also to fill in the space, especially as the likes of Birds of Prey and Emma are now available to view on-demand. 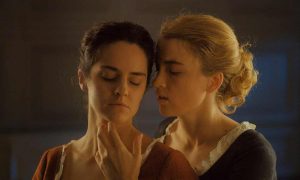 Gaze is a key element both in text and out in Portrait and Sciamma and co excel in portraying a gaze that is captivating but never leering. So often Sciamma keeps one or other of the leads smack center in the frame and the editing ensures that their eyelines are consistently matched, both with each other and often the audience. The result is incredibly intimate, accentuating the circumstances that Marianne and Héloïse are in, desperately close, no eyes on them but their own, we as viewers absorbing the same feeling. The performers compliment each other perfectly; Merlant maintaining a more stoic stance; reserved but bold and confident. while Haenel is more immediate, expressive, fierce with her face, but uncertain and wracked with inner conflict. Very Vivaldi. It makes for mesmerising viewing, their emotions building and brewing and clashing before bursting like a storm. 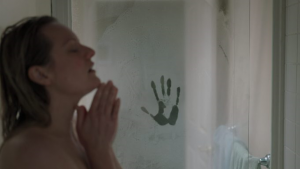 In this way, The Invisible Man suffers from the all too common paradox of not knowing what it wants to be. It wants to scare audiences, but it also wants to do so by using a relatable and atmospheric tension derived from real life terror. A textbook example of this was Jennifer Kent’s The Babadook, which rewrote the book on this type of horror. Robert Egger’s The Witch did so too, although many audience members may have been disappointed by both these films, because they went in expecting popcorn clutching screams. The impressive success of those films was in part based on the fact that it demanded your attention without relying on genre stereotypes. Its subject matter was terrifying in itself, and it wanted to hit you on a cerebral level. The Invisible Man could have done this, without the need to lay it on thick with the inevitable lean towards conventions. But it didn’t do so, and for that reason, it lost a lot of the effect that it was capable of generating.

Misbehaviour benefits from the pedigree of a strong cast, a compelling story and a seasoned director at the helm; Philippa Lowthorpe was the first woman to win Best Director at the Baftas, and she’s won twice. The costuming, make up, hair and set design all evoke the new era being born and really ground the story in a time and place which feels fully realised. Misbehaviour has all the ingredients to make it a hit but unfortunately it falls down on building layered and sympathetic characters and it’s difficult to stay on board, especially when the plot holds no surprises (which isn’t the film’s fault necessarily because you can’t have spoilers for history!) 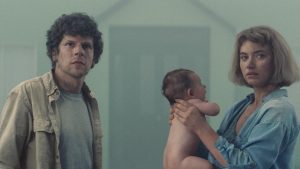 There are some bold choices as Vivarium ramps up the bleakness. If you’re going to be on the nose, you might as well break it, and the film has the mercilessly doomed energy of a Twilight Zone episode, with weird set pieces to match. It makes for a good showcase for Finnegan, knocking ideas around, playing well with some Hollywood actors and offering up a solid mix of wry and unnerving visuals. Acerbic, claustrophobic and darkly funny, it usually takes decades for films like this to be seen as ahead of their time, but Vivarium has quickly snapped into place as a prescient satire, too soon to be ‘too soon’ all too soon.