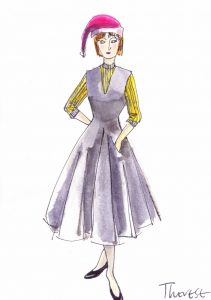 The masterclass is a further example of Warner Bros. continued support for industry professionals and trainees through Warner Bros. Creative Talent.  This follows the recently-announced scholarship for Allyn Quigley, an MA Screenwriting student at the National Film School at IADT.

“I became an infatuated fan of Sandy Powell’s work since I saw the stunning costumes she created for Tilda Swinton in Sally Potter’s Orlando, followed by Shakespeare in Love, The Aviator, Velvet Goldmine, Carol and of course her dynamic partnership with Neil Jordan which included The Crying Game, Michael Collins and The Butcher Boy. Equally at home with both period and contemporary setting, it’s an honour to welcome this three time Oscar winner to ADIFF 2018. I am delighted that Sandy will join us in Dublin to present two of her newest films Wonderstruck and How to Talk to Girls at Parties and participate in the 2018 Warner Bros. Creative Talent event – a public interview with Irish Costume Designer Eimer Ní Mhaoldomhnaigh.”

With a film-making career spanning over thirty years, with twelve Oscar nominations and thirteen BAFTA nominations while working with the industry’s leading directors, Sandy Powell can rightly claim to be one of the pre-eminent costume designers of her generation. From monarchs (Young Victoria) to mobsters (The Departed) to fairy-tale characters (Cinderella), Powell has created some of the most intriguing and sumptuous costumes in cinematic history.  Her collaborations with Warner Bros. include Neil Jordan’s era-defining historical epic Michael Collins and his darkly funny adaptation of Patrick McCabe’s The Butcher Boy. Powell’s other works include Far From Heaven, The Aviator, Hugo and Carol.

Tickets are available now from ADIFF and cost €12.