A Woman, A Part is visual nourishment. The performances are understated, the set and camera work graceful. The film is an intimate exploration of Anna, played by Maggie Siff who is best known for her roles in Mad Men and Sons of Anarchy respectively, as she struggles to decide whether she is giving too much of herself to her acting or is simply paying her dues. Anna returns to New York for “a real break, not a work break, not a charity drive, not a cleanse” on the advice of her concerned agent. While there, she has to face former acting partners and friends Kate and Isaac, who are still raw from her abandoning them in the middle of a show way back when.

When A Woman, A Part begins, it seems as though it will be about the “intense and neurotic and suicidal” character that Isaac wants Anna to be. How Ophelia is this image? 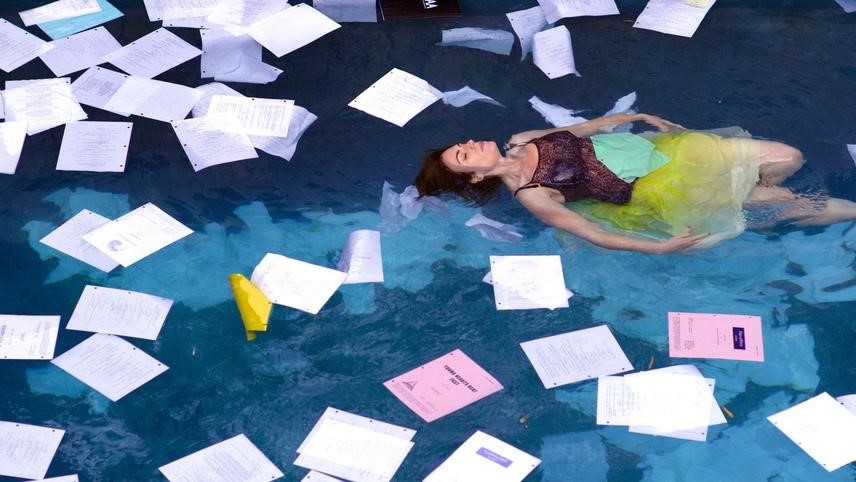 Even the name hints that it will be a Girl, Interrupted, mental-health-as-thematic-complication-to-be-conquered type of deal.

But A Woman, A Part is not the story of an ‘ageing’ actress falling apart as the name suggests. It instead takes an almost Cubist approach to character-study, showing Anna suffer and trying to revisit her past and eventually reclaim it before she can move forwards. Anna is taken apart so that she can become more whole.

The first we see of Anna, she is being clipped and zipped into a business suit. She is shown from behind, faceless and not in control of even this simple detail of her life. To be an actress, she has had to forfeit autonomy. Throughout the opening sequence, Anna is on the phone while driving (hands-free, don’t worry), she’s on the phone while walking, she’s on the phone during her Doctor’s appointment. There’s no hint of a work/life balance.

Through this visit, we learn that Anna is still getting over an auto immune disease that had floored her the previous year. She pushes for a refill of Ritalin “just til we wrap” but the Doctor disagrees. When he takes a call from his wife that takes him out of sight, she swipes a page from his prescription book. The fact that she takes just the one conveys how close she is to quitting.

While filming, Anna is set off by having to spill coffee down her shirt because of a boy. She is playing an award-winning journalist. She herself is a multiple Emmy winning actress. Her concerns about her character’s direction have gone unheard, until she hits breaking point off screen.

Anna stalks off and is pursued by the Director. He treats her as though she is just being a diva. During their conversation there is a knock on the door. An identical shirt to the one Anna’s wearing is handed in, we don’t see a person. There is so much interesting anonymity happening in A Woman, A Part. It dehumanises the TV/Film industries, which are held in opposition to the organic, almost nuclear environment of the theatre.

But anyway, Anna is dismissed with “That’s just who she is”, Anna shouts and gesticulates “What does that mean?! She’s just a cipher! She’s got no friends, just text messages.” The conversation is as much about Anna’s own life as it is her frustrations with the show. The director responds “I’m sure you can find something in her you can relate to”. She does not respond, like so many marginalised people who have had to bite their tongues in moments where they are expected to take part in their own debasement, albeit on a small scale.

Anna walks home, she stands out against the grey, dull buildings she passes. Racking focus pulls a pile of scripts into clear view as Anna starts snorting her ill-gotten Ritalin and she attempts to practice her craft. Next, well you’ve seen the photo. Leslie, Anna’s agent, comes to her house to see why she hasn’t shown up for work. She’s clearly fighting Anna’s corner over the phone. She exclaims “If you can’t respect her process…”, and then she spots Anna fishing out the scripts. A Woman, A Part is funny! It’s so refreshing to see a portrayal of mental health struggle that isn’t offensive or evasive.

They have a tender conversation, well-acted by both. Leslie tells her to take a break and she decides to head back to New York. Anna goes to stay in her old place, which she seems to have kept as a time-capsule. The tension and pressure Anna has been carrying immediately, viscerally falls away. She blows up a mattress, lays a sheet over it (which calls to mind the earlier ‘dressing scenes’), she flushes her Ritalin, chops off her bangs and takes a shirt out of a box which she slips on with a satisfied sigh.

All of this is preparation for a surprise birthday party for Kate, a former acting partner of Anna’s. We find that there is unfinished business between Anna, Kate and Isaac. Anna and Isaac fall back into rhythm straight away, but Kate is hurt and resentful.

She now teaches yoga and is no longer in acting. Anna goes along to one of her classes, and afterwards offends Kate by talking a fan whose recognised her that she taught Anna everything she knows. Kate shouts “It’s like you’re trying to prop me up!” We find that Kate is a recovering alcoholic, and Anna agonised over trying to help her back in the day. It doesn’t seem to be the reason an left, but there are a lot of big emotions on both sides.

When Anna babysits for Isaac and his wife Nadia, she gets involved when they come home arguing. Isaac has stopped appreciating Nadia and she has had an affair. But rather than using this as a flimsy plot device, the film actually explores the causes and effects of alienation in a relationship. Nadia doesn’t have to be the bad guy just because she was unfaithful. She screams at Isaac that he clutches onto their just-getting-by lifestyle like it holds the key to his authenticity. You maybe shouldn’t be oh so bohemian when you start having kids. She shouts:

“Did it ever occur to you that maybe I wanted to keep writing? You just don’t appreciate what’s in front of you. I don’t wanna be your rock, ’cause it’s boring!”

Meanwhile, Anna has found the script he’s written about their past. Her character is “intense and neurotic and suicidal!” When confronted, Isaac exclaims “You inspire me!” His self-involvement is so ridiculous that when Kate gets evicted and is panicking about having to go upstate, he asks “You’ll be back for my reading, right?

The relationships in A Woman, A Part are authentic; they really convey all of the ways that we can hurt each other, and how we learn to move on. It passes the Bechdel test with flying colours, and all of the women in the film have clear jobs and possess names. Despite being a character-driven, dialogue heavy film, A Woman, A Part has some really beautiful and bittersweet visual sequences. Beyond all of that, the film asks an important question; should we suffer for art? No. It’s narcissistic and damaging to believe (and reinforce) that in order to create something of worth you have to accept a certain level of suffering, from addiction to suicidal tendency to poverty. It’s not nobel, it’s not romantic and contrary to popular belief it’s not true!