Earlier this week, broadcaster for RTÉ 2FM Rick O’Shea took to Twitter to ask IMC for clarity on a rumour about the historic Savoy Cinema.

O’Shea has said that a source “in the know” claims the Savoy 1 screen will be subdivided into smaller screens. This could change the character of this cinema irreparably.

IMC responded that there are indeed big changes planned for the Savoy including refurbishments and new screens that will look something like this; 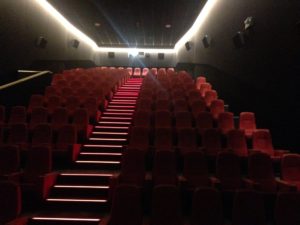 Foot traffic at the Savoy has unfortunately been light for some time. If the changes planned are in keeping with the cinema’s personality this could revitalise this spot.

But either way, if there’s weight to the rumours this would be a sad day for many Dubliners. When my Dad heard the news, he said that this was another knock to the Golden days of the cinema of his youth. He recalled the buzz, the huge queues that told you the Savoy had a big film, and the beauty of the building that made you feel important just for being there. He said that as a child in the 60s, this was their connection to America and made you feel you were part of something.

It would be a pity for the Savoy to lose its Old World Magic. But maybe these changes will bring new love to this touchstone for Irish cinema. We’ll be keeping a close eye as the situation unfolds.